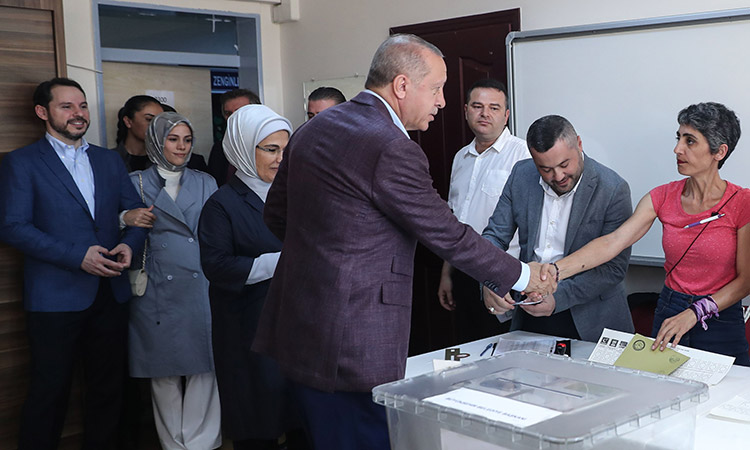 Recep Tayyip Erdogan shakes hands as he casts his vote during the mayoral election in Istanbul on Sunday. Adem Altan / AFP

Ekrem Imamoglu, mayoral candidate of the secularist Republican People's Party (CHP), was leading with 53.6% of votes versus 45.4% for Erdogan's AK Party (AKP) candidate, with nearly 95% of the city's ballots opened, Turkish broadcasters said.

"As of now my rival is leading," AKP candidate and former prime minister Binali Yildirim said minutes after the initial results were released.

"I congratulate him and wish him all the luck. My wish is for Imamoglu to serve Istanbul well," he said.

Imamoglu had won the original mayoral election on March 31 by a narrow margin that prompted the AKP to demand a re-run, citing what it said were voting irregularities.

The High Election Board's decision to grant that request drew criticism from Turkey's Western allies and from Erdogan's opponents at home, stirring concerns about the rule of law and raising the stakes in a re-run that many Turks saw as a test of their country's democracy.

Erdogan was Istanbul's mayor in the 1990s before he embarked on a national political career, dominating Turkish politics first as prime minister, then as president. He presided over years of strong economic growth but critics say he has become increasingly authoritarian and intolerant of dissent.

If confirmed, this second defeat in Istanbul, Turkey's biggest city and commercial hub, will be a major embarrassment for the president and could also weaken what until recently seemed to be his iron grip on power.

Analysts say the loss could set off a cabinet reshuffle in Ankara and adjustments to foreign policy.

Turkey is balancing diplomatic relations with Russia and the United States, which has threatened sanctions against its NATO ally over its purchase of Russian missile defences.

The setback for Erdogan, who campaigned hard in Istanbul, could also trigger a national election earlier than 2023 as scheduled.

Turkey's economy is now in recession and the United States, its NATO ally, has threatened sanctions if Erdogan goes ahead with plans to install Russian missile defences.

The uncertainty over the fate of Istanbul, Turkey's business hub, and potential delays in broader economic reforms, have kept financial markets on edge. Turkey's lira currency tumbled after the decision to annul the March vote and is down nearly 10% this year in part on election jitters. 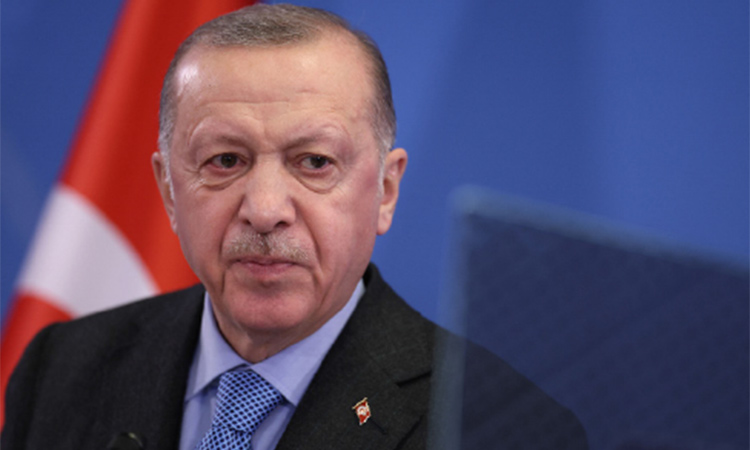