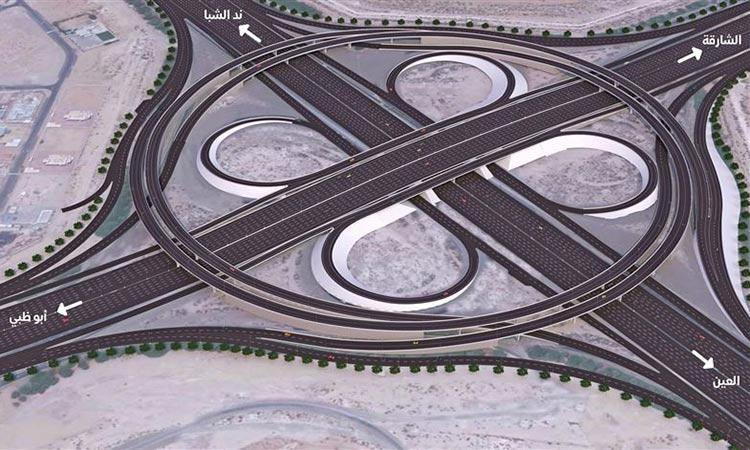 The project will enhance the Road’s link with several highways.

His Highness Sheikh Mohammed Bin Rashid Al Maktoum, Vice President and Prime Minister of the UAE and Ruler of Dubai, has approved the Improvement of Dubai-Al Ain Road Project at a cost of Dhs2 billion.

The project will enhance the Road’s link with several highways, such as Sheikh Mohammed Bin Zayed Road, Sheikh Zayed Bin Hamdan Al Nahyan Road and Emirates Road. It will also serve the existing and future development projects on both sides of the Road.

The improvements will result in doubling the number of lanes from three to six lanes in each direction over a 17-km sector.

Works also include upgrading six interchanges as well as constructing new bridges and service roads on both sides.

The Project will boost traffic safety, enhance the road intake from 6000 to 12000 vehicles per hour, and cut transit time from Emirates Road interchange to Oud Metha Street from sixteen to eight minutes.

“The Roads and Transport Authority is undertaking this project in response to the directives of Sheikh Mohammed, to meet the needs of urban development and demographic expansion and keep pace with the current upswing, as well as bring happiness to people.

“It will serve several development projects on both sides of the Dubai-Al Ain Road such as Meydan, Dubai Silicon Oasis, Dubailand Residential Complex, Liwan and Dubai Design District,” said Mattar Al Tayer, Director General and Chairman of the Board of Executive Directors of Roads and Transport Authority (RTA).

“The development of the remaining sector of the Dubai-Al Ain Road from the interchange of Emirates Road up to the outskirts of Al Ain city will be undertaken in future,” explained Al Tayer.

Works include constructing four ramps to serve traffic movement in four directions, which is planned to be completed in the first half of 2020.

The existing bridge on Sheikh Mohammed Bin Zayed Road will be redeveloped to enable widening of the Dubai-Al Ain Road from three to six lanes in each direction, besides constructing service roads on both sides of the Road.

“It involves the construction of a flyover of four lanes in each direction crossing over Dubai-Al Ain Road, with a possibility of widening it to five lanes in future.

“Works include improving the existing ramp to serve the inbound traffic from Dubailand Residential Complex heading westward to the Dubai-bound sector of Dubai-Al Ain Road.

“A new flyover will be constructed to serve the traffic coming from Dubai heading northward to the Academic City and the Dubai Silicon Oasis. Service roads will be constructed on both sides of the Road along with turning ramps to serve other movements and development projects.

“Phase I also covers upgrading the interchange of Emirates Road by constructing a flyover crossing Dubai-Al-Ain Road to serve west-bound traffic from Dubailand Residential Complex to Dubai. Service roads will be constructed on both sides to avoid traffic overlapping on the highway, improve road efficiency, and enhance traffic safety,” explained Al Tayer.