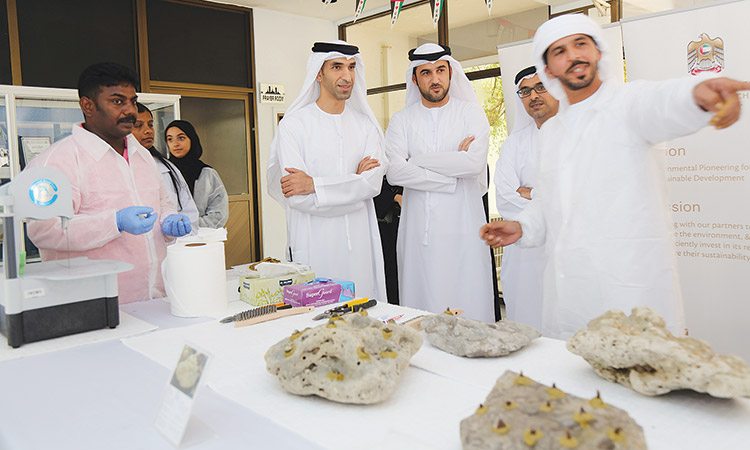 Ahead of installing rock barriers onsite, representatives of the Ministry cultivated three species of corals on the rocks.

The barriers are anticipated to recreate natural habitats and breeding grounds for marine creatures, particularly corals, and thereby preserve and strengthen the country’s aquatic biodiversity. They will also help protect the UAE’s coastline against storm damage and erosion.

Dr Thani Bin Ahmed Al Zeyoudi, Minister for Climate Change and Environment, and Salah Al Rayssi, Acting Assistant Undersecretary for the Biodiversity and Marine Life Sector at MOCCAE, were present for the implementation of the project’s pilot phase along the shores of Umm Al Quwain beaches, with rocks installed at depths ranging between five- and 15-metres. Ahead of installing rock barriers onsite, representatives of the Ministry cultivated three species of corals on the rocks: Acropora, Porites, and Stylophora. The growth of the coral cultures will be monitored over a long-term period.

Al Rayssi said: “This project aligns with the Ministry’s strategy to sustain local biodiversity through restoring natural habitats and building artificial ones for species to breed and flourish. MOCCAE has put in place an integrated rehabilitation programme for coastal areas in the UAE, which encompasses the installation of artificial caves and tidal pools, as well as rock barriers and the cultivation of coral reefs.”

In addition, the project will include the restoration of coral reefs through leveraging the micro-fragmentation technique. The technique comprises breaking the corals into smaller pieces that are one- to two-centimetres long ahead of planting them. According to MOCCAE’s preliminary experiments, this promising method stimulates the coral tissue to grow two- to three-fold compared to the conventional fragmentation method. Moreover, coral reefs that grow using micro-fragmentation have an 80 per cent higher chance of survival.

Recently, the Ministry of Climate Change and Environment, MOCCAE, in cooperation with Abu Dhabi Waste Management Centre, Tadweer,  hosted a joint workshop with a delegation from the Seoul Metropolitan Government, SMG, in the Republic of Korea, headed by Mayor Park Won-soon. The event aimed to exchange best practices in circular economy and waste management with a special focus on the Seoul Upcycling Plaza, the world’s largest upcycling cultural complex space.

The workshop fell within the scope of a memorandum of understanding, MoU, signed between MOCCAE and SMG in February 2019, that facilitates the exchange of best practices in waste recycling between the two entities.

Dr Al Zeyoudi highlighted the robust strategic ties between the UAE and South Korea, buoyed by the shared commitment of their leaderships to exploring opportunities for cooperation.

Speaking on the workshop, he said: “Around the world, waste generation rates continue to surge, with statistics indicating that they will rise by as much as 70 per cent between 2016 and 2050. When poorly managed, waste is a breeding ground for toxins and microbes that contaminate the air, soil, and water. It also generates harmful methane gas – a key contributor to climate change. This is why an effective, integrated, and socially supported waste management programme is crucial when it comes to safeguarding human health and the environment.”

The Ministry of Climate Change and Environment (MOCCAE) was established in February 2006 as the Ministry of Environment and Water. Under its redefined scope, the ministry has taken on a dual mandate. On the national level, the ministry aims to strengthen the UAE’s efforts in preserving the environment and promoting food diversity in accordance with the nation’s aspiration to emerge as a key benchmark for sustainable development. 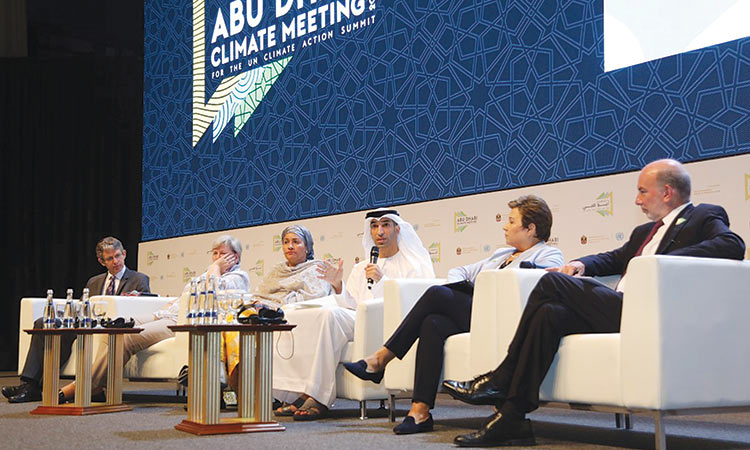