Hundreds rally for change despite arrests in Algeria - GulfToday 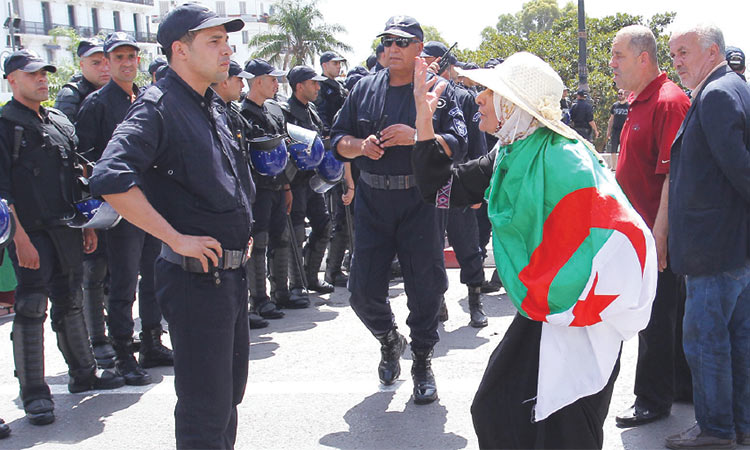 A protester wrapped in a national flag confronts riot police in Algiers on Friday. Agence France-Presse

The demonstrators in central Algiers brandished the Algerian flag that has been a mainstay of the protests but some also carried the Berber colours despite a ban on the minority’s flag imposed this week by army chief General Ahmed Gaid Salah, Algeria’s strongman since Bouteflika’s ouster.

“No to regionalism, we are all brothers,” the protesters chanted.

Police earlier detained dozens of demonstrators, especially those carrying the Berber colours, from around the capital’s main post office, the epicentre of demonstrations since they first broke out in February.

On previous Fridays since the fall of Bouteflika, those detained have been released at the end of the day.

Algerians have been holding massive protests since an ailing Bouteflika announced plans to seek a fifth term in office.

The veteran leader resigned as the pressure against him to quit mounted from all sides, only hours after close ally Gaid Salah demanded impeachment proceedings against him.

Although the army chief has ordered a wave of anti-corruption investigations, demonstrators have kept up calls for his departure along with the entire regime that surrounded Bouteflika.

Two former prime ministers last week joined a long list of prominent politicians and businessmen who have been detained as part of the investigations into corruption.

Larbaoui is director of a private company called Global Group, which runs a car assembly plant set up in joint venture with South Korea’s Kia Motors.

The court of first instance in Algiers ordered Larbaoui to be detained, along with the head of state bank Banque Nationale d’Algerie (BNA) and two industry ministry officials, state radio reported.

Ouyahia and other officials could not immediately be reached for comment, nor could their representatives.

The seven are being investigated on accusations of “dissipation of public funds, illegal privileges and money laundering,” the radio said.

The supreme court also ordered the detention of Ouyahia and another former prime minister, Abdelmalek Sellal, last week for “dissipation of public funds and awarding illegal privileges” in a separate corruption case.

Protests in Algeria have continued since Bouteflika’s exit, with demonstrators seeking the departure of interim President Abdelkader Bensalah and Prime Minister Noureddine Bedoui, who they view as part of the old guard that has run the North African country since independence from France in 1962.

Authorities have postponed a presidential election previously planned for July 4 because of a lack of candidates, with no new date set for the vote.

Six provincial governors were also referred to the Supreme Court in the same case, the Thursday statement said.

Salah on Wednesday warned that security forces would be “strict” in preventing any attempt to infiltrate protest marches, the Defence Ministry said in a statement.

“It is my responsibility to draw attention to a sensitive issue, namely the attempt to infiltrate the marches and to raise flags, other than our national flag, by a tiny minority,” the statement quoted him as saying at a military base in the southwestern province of Bechar.