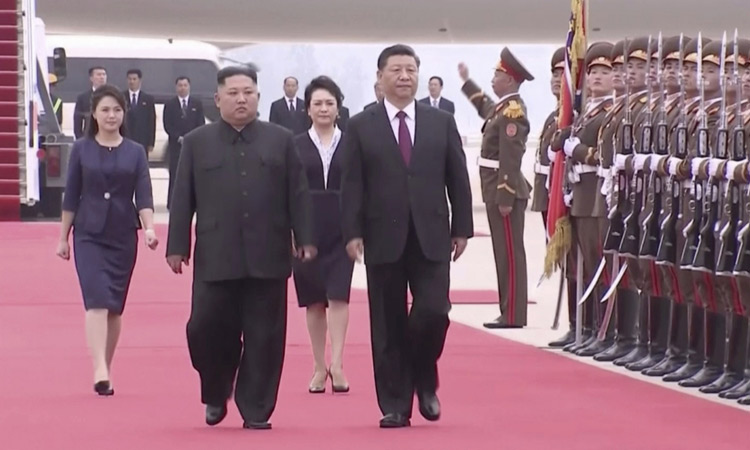 In this image taken from a video footage run by China's CCTV, Kim Jong Un and Xi Jinping walk together at an airport in Pyongyang on Thursday. AP

North Korean leader Kim Jong Un held talks with Chinese President Xi Jinping in Pyongyang on Thursday during a historic visit to burnish an uneasy alliance, with the two men each facing challenges of their own with US President Donald Trump.

With the North's nuclear negotiations with the US at a standstill, Kim told his country's key diplomatic supporter and main provider of trade and aid that he was "willing to be patient," Chinese state media reported, but wanted "the parties concerned" to meet him halfway.

But Kim ensured that Xi was the first head of state he met as he embarked on a flurry of diplomacy last year, and has now visited his older ally four times in China.

Pyongyang has been increasingly keen for Xi to reciprocate, while according to diplomats Beijing has been biding its time to see how nuclear talks between Kim and Trump play out.

But China's own trade negotiations with Washington hit a wall last month and analysts say Xi is now looking for leverage ahead of his meeting with Trump at next week's G20 summit in Japan.

At their formal talks, according to Chinese state broadcaster CCTV, Kim told Xi that the North had taken "many positive measures to avoid a tense situation" over the past year, "but has not received positive responses from the relevant parties."

"This is not what the DPRK wants to see," CCTV cited him as adding.

Pyongyang wants to demonstrate to Trump that it has China's support after Trump and Kim's second summit in Hanoi in February broke up without a deal.

Xi told Kim that he "positively evaluated" the North's efforts and was "willing to strengthen coordination and cooperation with the DPRK and all relevant parties."

China has fretted over being sidelined by diplomatic developments since last year, with Trump going as far as declaring he had fallen "in love" with Kim, and the comment was a clear assertion of Beijing's place in the negotiations.

"Xi wants everyone to remain acutely aware that he can influence Kim, and that no comprehensive, durable deal with North Korea can occur without China's assistance — and approval," Scott Seaman, Asia director of the Eurasia Group consultancy, said in a research note.

But Robert Wood, US Ambassador to the Conference on Disarmament in Geneva told AFP the US was not concerned.

"What we hope is that President Xi is making the point to Kim Jong Un that we need to move forward on denuclearisation, again something that Kim Jong Un has agreed to."

Portraits of the two leaders stood outside the terminal, pictures showed, and a 21-gun salute was fired before the pair drove into the capital together, standing in a convertible Mercedes Benz past tens of thousands of cheering residents lining the streets and more waving from their windows.

Pyongyang always puts on an impressive show when a foreign leader visits but in an unprecedented move, Xi was welcomed at the Kumsusan Palace, the mausoleum where the preserved bodies of the North's founder Kim Il Sung and his successor Kim Jong Il — the grandfather and father of the current leader — lie in state.

The Rodong Sinmun newspaper, the mouthpiece of the ruling party, devoted the top half of its front page to the visit, with a colour picture of Xi, a day after it carried an article by him, also on the front page.

The show of amity belies a sometimes strained relationship — Kim did not visit Beijing to pay his respects for more than six years after inheriting power.

Authorities have imposed tight restrictions on other media, with international journalists in Pyongyang not allowed to cover the visit, and no non-Chinese foreign media organisations given visas.

Beijing sees the North as a strategic buffer, keeping the 28,500 US troops in South Korea far from its borders, and Xi's trip was to include a stop at Pyongyang's Friendship Tower, which commemorates the millions of Chinese troops who saved Kim Il Sung's forces from defeat during the Korean War.