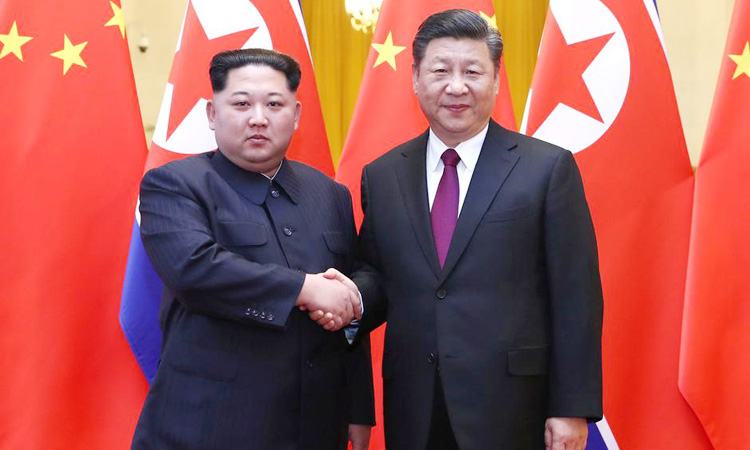 Xi didn’t mention the stalled nuclear weapons talks between Washington and Pyongyang in the Rodong Sinmun article. But experts say Xi during his summit with Kim will likely endorse North Korean calls for an incremental disarmament process in which every action Pyongyang takes it met with US concessions on sanctions and security issues.

Xi said his visit on Thursday and Friday would “strengthen strategic communication and exchange” between the traditional allies.

Xi, who is locked in a bitter trade war with President Donald Trump and ahead of an expected meeting between the leaders at the G20 meetings in Japan, will try to use his summit with Kim as leverage, by reminding Trump of Beijing’s influence with Pyongyang, which could either help or disrupt the US-North Korea diplomacy, experts say.

Kim also wants to strengthen his own position against Trump and is obviously seeking to cement China, the North’s only major ally and economic lifeline, as a major player in the process.

Nuclear negotiations between the United States and North Korea have been on a standstill since February when a summit between Kim and Trump collapsed over what the Americans described as excessive North Korean demands for sanctions relief in exchange for only a partial surrender of its nuclear capabilities.

Kim has said he would seek a “new way” if the United States persists with sanctions and pressure against North Korea. The Trump administration has said sanctions will remain in place until the North commits to fully and verifiably relinquishing its nuclear and missile program upfront.

While Kim is trying to leverage his nuclear weapons and missiles for economic and security benefits, there are doubts on whether he would ever fully deal away an arsenal he may see as his strongest guarantee for survival.

Kim during his summits with Trump and Moon signed vague statements on a nuclear-free Korean Peninsula, but the North for decades has pushed a concept of denuclearization that bears no resemblance to the American definition, vowing to pursue nuclear development until the United States removes its troops and the nuclear umbrella defending South Korea and Japan.

Some experts say Kim’s moves to install China as a major player in the process have been seen as a sign that the North’s traditional stance essentially remains. During previous periods of tensions, Beijing has called for “dual suspension” of the North’s nuclear and missile activities and of the large-scale military exercises between the US and South Korea.