UAE's Well of Hope will provide clean water to 34 countries 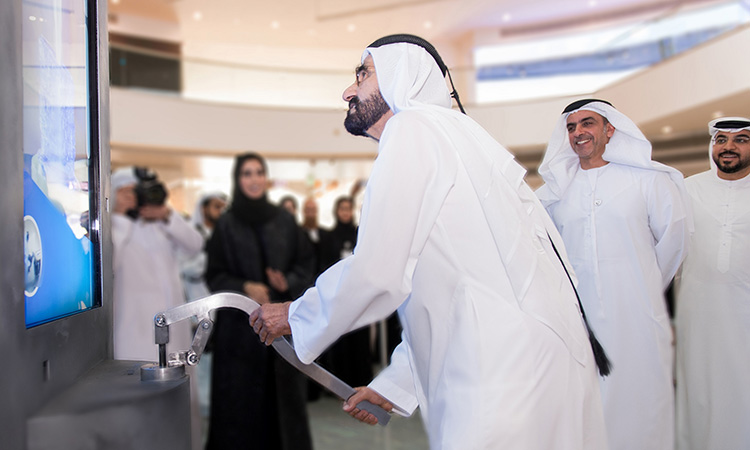 Sheikh Mohammed during the launch of the 'Well of Hope' initiative. File

The “Well of Hope” campaign will provide clean water to over one million individuals in disadvantaged communities after 21 participating entities across the UAE pledged to dig 150 wells in 34 countries.

The 20-day humanitarian competition, the first of its kind in the region, was launched earlier by His Highness Sheikh Mohammed Bin Rashid Al Maktoum, Vice President and Prime Minister of UAE and Ruler of Dubai, when he urged public and private sector employees across the country to pump the largest amounts of water through a mobile virtual pumping device during the Holy month of Ramadan to be donated to people in need.

The Awqaf and Minors Affairs Foundation in Dubai (AMAF) took the lead through establishing the “Well of Hope” endowment to provide clean water to over 600,000 beneficiaries annually and implement sustainable water-supplying projects in drought-affected communities across the world. The Foundation also recorded high number of participating employees in the competition.

The essence of civilization

Mohammed Al Gergawi, Minister of Cabinet Affairs and the Future, said the humanitarian campaign embodies the vision of Sheikh Mohammed to create hope and promote the values of giving and human solidarity through providing clean water, the essence of life, to disadvantaged communities.

It also reflects the UAE’s commitment to preserving the human dignity, lending a helping hand, and enhancing the quality of life across the world to build a brighter future for humanity.

Al Gergawi reaffirmed that Sheikh Mohammed’s launch of the humanitarian competition was, first and foremost, aimed at encouraging institutions to help empower vulnerable communities in water-stressed regions across the world with safe drinking water.

“The initiative carries on the UAE’s pioneering journey of humanitarian work and consolidates the country’s growing contributions aimed to instill the pillars of stability, growth and optimism for a better tomorrow,” Al Gergawi said.

He noted that the immediate response of institutions and entities to the humanitarian competition “reflects their commitment to corporate social responsibility to help people wherever they are, regardless of ethnicity, race or religion.”

Al Gergawi added, “The campaign is part of our objectives to instill the values of tolerance, giving and unconditional support,” Al Gergawi noted.

He said that the initiative’s outstanding results accomplished in less than a month drives entities, including Mohammed Bin Rashid Al Maktoum Global Initiatives (MBRGI), to continue adopting innovation in shaping the future of humanitarian work that will benefit the largest segment of people and communities.

The “Well of Hope” initiative presented an inspiring humanitarian and social experiment to highlight the role of individuals and institutions in serving humanity and encourage them to spread hope.

Simple efforts contributed to providing clean water to over one million individuals in less fortunate communities with scare water resources across the four corners of the world.

Dubai Police and Abu Dhabi Media achieved record employee participation, with each entity contributing over 19,000 litres. Employees of DP World and Dubai Culture and Arts Authority pumped over 17,000 litres each, while the Dubai Health Authority (DHA) and Dubai Media Incorporated contributed over 15,000 litres to the “Well of Hope.”

Projects launched as part of the “Well of Hope” competition have already started benefitting people in several developing countries. Tajikistan, in Central Asia, was the first to receive wells to supply clean water to its people.

The “Well of Hope” campaign had started in Cairo, Egypt, in April where people from different segments of the society virtually pumped water into an interactive mobile device to help provide safe drinking water to those in need.

The device was then brought to Dubai’s “City Walk,” inspiring the public to exert simple efforts in serving humanity before Sheikh Mohammed bin Rashid Al Maktoum launched the institutional competition through his social media platforms last month, calling on private and public entities to do their part in serving humanity. “A new institutional humanitarian competition embodies our search for the strength in every human being,” he had tweeted.

The campaign aimed to highlight the role of individuals and institutions in utilizing available resources to create hope.

During Ramadan, employees of 21 public and private institutions competed to pump the largest amounts of water into the device to be matched by MBRGI that will, in return, donate the collected amount to water-stressed regions.

The participating entities were selected from over 50 applicants that immediately raced to answer Sheikh Mohammed bin Rashid Al Maktoum’s call within two days of the competition’s launch, creating a widespread institutional move to serve a good cause.

The innovative competition benefited over one million people through a simple mobile interactive pumping device that rotated across participating entities daily. It attracted wide online engagement from the first day of its launch through Sheikh Mohammed’s social media platforms.

Its simplicity and sustainability earned widespread admiration among the community, and local and international organizations specialized in education, health, development and combating poverty and hunger. Specialists and academics also acknowledged the positive impact that the initiative has created in highlighting the critical global issue of water scarcity.

The positive response, he said, highlights the strong culture of corporate social responsibility embedded across institutions in the country.

Al Shehhi noted that receiving 50 applications within two days of the competition’s launch demonstrates that innovation drives people to participate in noble causes and, therefore, increases the number of beneficiaries.

He added, “The competition’s success in benefitting over one million people globally proves that implementing the latest technology and virtual reality in humanitarian work helps empower people and provide basic life necessities.”

Al Shehhi commended the local media’s support to the initiative, pointing to the huge public response. He said the competition’s positive impact was mainly manifested in its emphasis that every person is capable of helping others and contributing to critical issues in the world.

The AMAF in Dubai took the lead through establishing the “Well of Hope” Endowment to implement sustainable water-supplying projects that benefit 600,000 people in drought-affected communities annually. The Foundation recorded huge participation among employees.

His Excellency Ali Al Mutawa, Secretary General of AMAF, said topping the competition is an honor and a big responsibility at the same time. “The ‘Well of Hope’ represents a global innovative campaign from the UAE to provide the main source of life and an essential element of the development of societies.”

Al Mutawa added that the endowment, which will provide sustainable clean water to people in need across the world, embodies the concept of innovation in humanitarian work to expand the scope of beneficiaries. “We hope the endowment encourages all segments of society to support humanitarian work and join the path of spreading hope. The UAE has long adopted the concept of endowment for all, providing the opportunity for the community to offer their support.”

United for a good cause

Hala Badri, Director General of Dubai Culture and Arts Authority, said, “The ‘Well of Hope’ brings people together to compete towards serving a noble and sustainable cause, which lies in providing an important element of life and progress.” She added that Dubai Culture partnered with Dubai Mall and a number of artists and public figures to attract the biggest number of participants and promote the spirit of innovation and cooperation among our employees.

His Excellency Humaid Mohammed Al Qatami, Director General of the DHA, said the “Well of Hope” campaign presents a unique example of Sheikh Mohammed bin Rashid Al Maktoum’s humanitarian message to the world. “Providing water to save millions of lives is the ultimate meaning of giving,” he added. “Water is the essence of life and society growth and prosperity.”

Meanwhile, His Excellency Saeed Mohammed Al Tayer, MD and CEO of DEWA, said “Sheikh Mohammed bin Rashid Al Maktoum’s humanitarian initiatives cement the country’s status as a beacon of hope and humanity that reaches everyone in need and alleviates the suffering of people wherever they are.”

He added, “We are honored to have answered Sheikh Mohammed bin Rashid Al Maktoum’s call to improve millions of lives around the world and send the message of hope from the land of peace, hope and positivity— the UAE.”

Global figures show that one in 10 people in the world have no access to pure water, while over two billion people live in countries experiencing high water stress. It is predicted that 30 countries will be facing water shortages by 2025.

The World Health Organization (WHO) stresses that the issue of water scarcity will continue to evolve into an urgent priority, exacerbated by climate change and low water supply systems in less fortunate communities. Contaminated water is linked to transmission of diseases such as cholera and diarrhea, which mostly affects children and puts their lives at risk.

According to figures, over 800 million people have no access to safe drinking water. 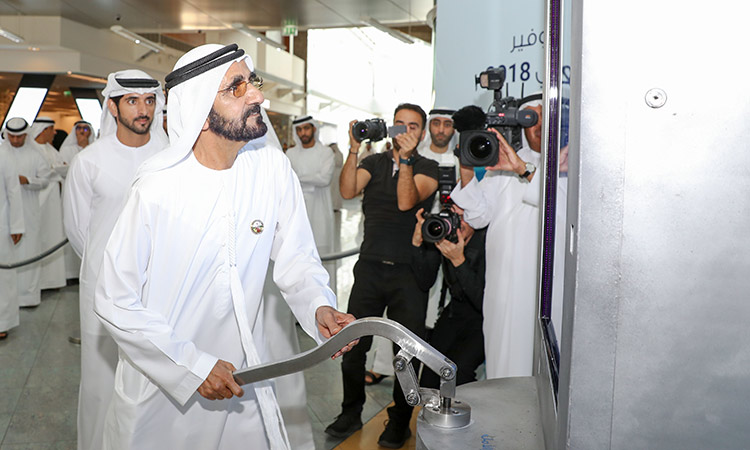 Sheikh Mohammed invites institutions to pump the ‘Well of Hope’

His Highness Sheikh Mohammed Bin Rashid Al Maktoum, Vice President and Prime Minister of the UAE and Ruler of Dubai, has called on government and private sector employees through his social media platforms to participate in a new innovative humanitarian competition.