US slashes aid to Central America over migrants - GulfToday 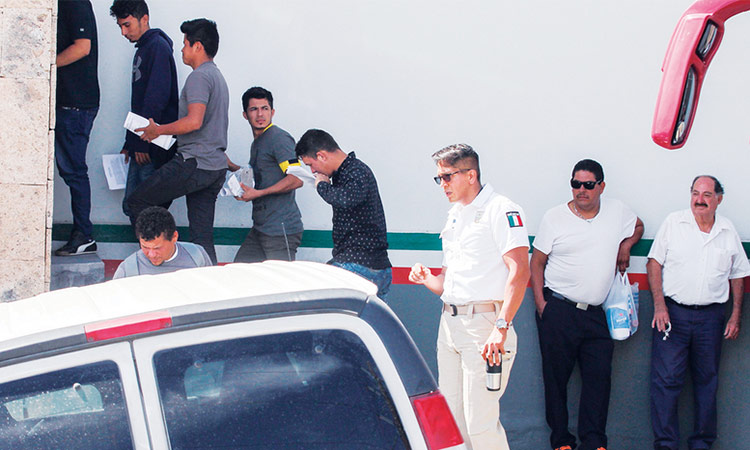 Migrants returned from the US to Mexico are being transferred to the facilities of Mexican National Institute of Migration in Mexico on Monday. Agence France-Presse

The plan will likely encounter stiff opposition in Congress.

Lawmakers, including some of Trump’s fellow Republicans as well as Democrats, have chafed against the president’s repeated decisions to disregard spending bills passed by Congress, some of which he has signed into law himself.

Lawmakers who opposed the plan said it was cruel to cut off aid to countries grappling with hunger and crime and that the move would be counterproductive because it would more likely increase the number of migrants than decrease it.

All of the money for those years has not yet been spent.

The administration said in March it would cut aid to the three countries after Trump expressed unhappiness with the their immigration policies.

No funds will be provided until the administration is satisfied the countries are reducing the number of migrants reaching the US border, State Department spokeswoman Morgan Ortagus told reporters.

“This is consistent with the president’s direction and with the recognition that it is critical that there be sufficient political will in these countries to address the problem at its source,” she said.

Without elaborating, she added: “Working with Congress, we will reprogramme those funds to other priorities as appropriate.” A US official, with knowledge of plans, said the administration would review the funding by April 2020.

Meanwhile, Trump said on Monday that US authorities would begin next week removing millions of immigrants who are in the United States illegally.

US Vice President Mike Pence suggested last week that Guatemala could receive asylum seekers from its neighbours as a so-called safe third country.

In yet another development the UN migration agency said on Tuesday that at least 380 Latin American migrants have died on their journeys this year, many of them Venezuelans drowning in the Caribbean or Central Americans perishing while trying to cross the US-Mexico border.

The toll, 50 per cent more than the 241 recorded as of mid-June 2018, also coincides with tightened security along the US southern border, which often leads migrants to turn to underground criminal smugglers and take riskier routes, it said.

“This month has been marked by several tragedies on the US-Mexico border, where at least 23 people have died since May 30 May, that is more than one per day,” spokesman Joel Millman of the International Organization for Migration told a briefing.

IOM figures show that so far, 144 migrants are known to have died in Mexico, 143 in the Caribbean, 66 along Mexico’s southern border with Central America and 27 in South America.