32 Filipino sailors in oil tankers incident, to be repatriated - GulfToday 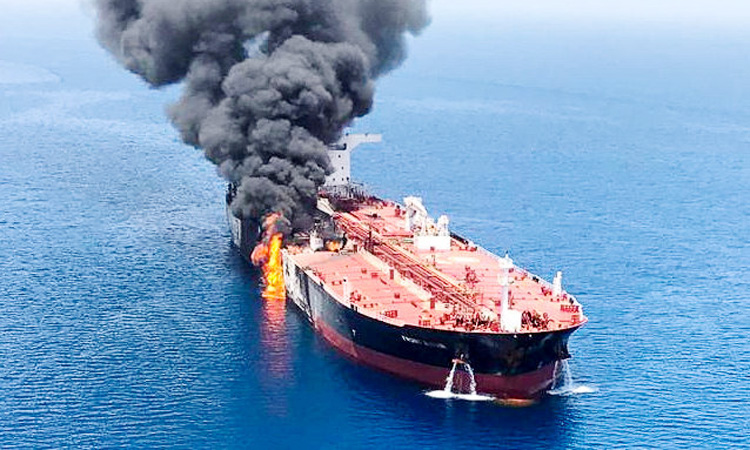 An oil tanker is seen after it was attacked at the Gulf of Oman. File/ Reuters

Thirty-two Filipino seafarers caught in the June 13 (Thursday) “mysterious attacks” on two oil tankers near the Strait of Hormuz and off Gulf of Oman are now being attended to by authorities and manning agencies.

She added: “They are all safe and unharmed. Yes. They are all documented (overseas Filipino workers).”

Quintana said 21 of the 32 consisted of the total crew of the MT Kokuka Courageous.

The other 11 were among the 23 seamen—the others were 11 Russians and one Georgian—on board MT Front Altair.

All of them “appreciated the kind assistance extended to them by the rescue operations and by the UAE and Philippine governments,” said Quintana.

Reports from various media entities had indicated that MT Kokuka Courageous is a Japanese-owned chemical/oil products tanker built in 2010 which currently sails under the Panamian flag.

The Refinitiv Oil Research team that reports on all oil industry matters around the world, had obtained the timeline of the June 13 tragedy “as it occurred based on the vessel tracking data.”

Refinitiv stated: “The vessel Front Altair loaded 75,000 MT of Naphtha from the Takeer Refinery Terminal in Ruwais, UAE and departed the post at 7:30 p.m. on June 11. After crossing the Strait of Hormuz at around 9 p.m. on June 12, data shows the vessel to have taken a sharp deviation from its course at 2:47 a.m. on June 13 with the speed dropping from 13.5 knots to eventually drifting at mid-sea. At the same time, the vessel Hyundai Dubai managed by Rickmers Shipmanagement GMBH was 6.8 nautical miles away from the Front Altair and can be seen making a sharp course correction towards the ship, most likely on receiving the distress alert. Vessel tracks show the Hyundai Dubai to have stopped near Front Altair between 3:30 to 3:50 a.m., possibly to pick up the crew who abandoned the vessel following the fire that was reportedly due to a surface missile.”

Front Altair was on fire and Hyundai Dubai “handed over the rescued crew members to Iran.”

On the MT Kokuka Courageous, Refinitiv wrote: “The vessel Kokuka Courageous carried out a two port loads in Mesaieed, Qatar and Jubail Saudi Arabia, bound towards Singapore, carrying Methanol. The tanker departed Jubail at 7 a.m. on June 10 and crossed the Strait of Hormuz at 9 p.m. on June 12. This vessel also seem to have been under attack around the same time and was seen stopped at 6:20 a.m. on June 13, about 80 nautical miles east of Fujairah.”

Refinitiv reported that according to the MT Kokuka Courageous  manager, Bernhard Schulte, “a breach of the hull above the water line on the Starboard side” occurred “as a result of a suspected attack.”

It was the service vessel identified as Coastal Ace which picked up the all-Filipino 21 crew.

The “mysterious attacks” on both oil tankers further escalated the tension between the US and Iran with the former accusing the latter of having master-minded the early morning incident. Iran denied.

Upon receiving reports on June 13, United Nations (UN) secretary general Antonio Guterres who at that time was in a meeting of the UN Security Council on cooperation between the international organisation and the League of Arab States, declared: “I strongly condemn any attack against civilian vessels. The world cannot afford a major confrontation in the Gulf Region.”

France and Britain urged for restraint.