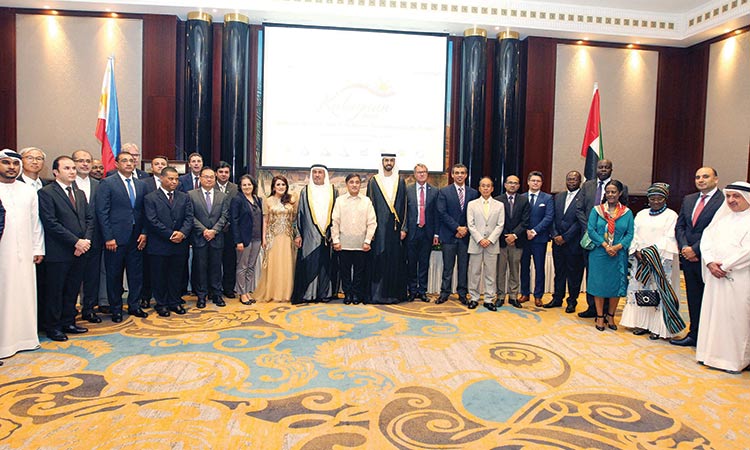 The Philippine Consulate General in Dubai (PCGDXB) head of post since October 2015, publicly expressed his gratitude during the reception which the diplomatic mission hosted at the Al Wasl Ballroom of the Dusit Thani in Dubai.

Chief guest at the occasion, which saw huge attendance from the UAE business community, and the Diplomatic Community as well as from the 550,000 Filipinos in Dubai and the Northern Emirates, was UAE Artificial Intelligence Minister Omar Sultan Al Olama.

In his nine-minute and 48-second speech, Cortes acknowledged the initiatives of the host government led by MOFAIC-Dubai and the business conglomerates namely Dubai Festival City (DFC), Al Futtaim Group, Emaar, and Dubai Parks and Resorts (DPR) for the June 12, 2019 commemoration of Philippine independence from Spain.

“We have read in the past few days how very busy and hectic was the (PCGDXB) and the Filipino Community in Dubai and the Northern Emirates.” Cortes was referring to the Imagine Light Show held evenings of June 12 to 15, wherein DFC management had the DFC Events Centre become a catalogue of Philippine history and contemporary times as well as a tourist map; and the access to all the thematic parks at the DPR at discounted rates for Filipinos on June 14 and 15.

He highlighted the June 12 10-minute lighting of the world’s tallest building, Burj Khalifa, which at 830 metres high, shone bright with the Philippine national flag colours of red-white-blue-yellow.

Cortes emphasised these are already etched in both the hearts and memory of not only the 750,000 Filipinos across the seven emirates but those in other parts of the globe as well.

“Your initiatives have given the hundreds and thousands of Filipinos living in the UAE a new shining hope. You also have given and mesmerised (not only Filipinos in the UAE but all of us around the world about the UAE being) a progressive, modern sovereign state that accepts, welcomes, acknowledges and embraces us as warm as the Dubai sun.” Cortes expressed his deep gratitude to MOFAIC’s Almutaiwee. He described him as a “dear brother and the rock star among the Filipinos.” This is so as Cortes, in his June 12 address, before the Filipino Community after the traditional Philippine Independence Day Flag Raising Ceremonies at the diplomatic mission quarters in Al Qusais, had mentioned that his wish to have the Philippine national flag emblazoned at the Burj Khalifa, was made possible by the MOFAIC-Dubai secretary general.

Puyat was elated when informed about the collaboration of the consul general with the MOFAIC-Dubai and in the other projects, with the Filipino Community and other entities: “How active our Filipino Community! It is so heartwarming!” The Burj Khalifa special tribute was also given special coverage by major Philippine media outlets such as the Philippine Daily Inquirer, ABSCBN and GMA-7 television networks.

Cortes in his speech acknowledged the vibrant cooperation between the PCGDXB with the Filipinos in Dubai and the Northern Emirates who are one in uplifting their state and image in the global arena by way of various programmes into heritage/arts/culture, financial literacy as well as more efficient and quick consular services.

He expressed hope that his countrymen continually contribute to the progress of the UAE.