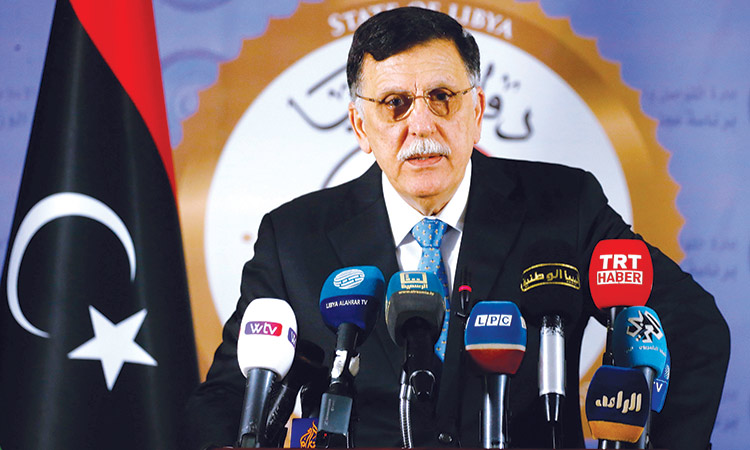 Fayez Al Sarraj speaks during a press conference in the capital Tripoli on Sunday. Agence France-Presse

Prime Minister Fayez Al Sarraj told a news conference in Tripoli, the seat of his administration, that he is proposing a “Libyan forum” aimed at finding a peaceful solution to the conflict. The talks would draw up a roadmap for parliamentary and presidential elections to be held before the end of 2019.

There are fears that the battle for Tripoli could ignite a civil war on the scale of the violence after the 2011 uprising that toppled and killed longtime ruler Muammar Qadhafi.

Libya is divided between the weak government of Sarraj in the west, and Field Marshal Khalifa Hafaer, whose self-styled Libyan National Army holds the east and much of the south. Haftar opened a military offensive on the capital in early April, advancing on the city’s southern outskirts and clashing with militias loosely affiliated with the UN-recognized government.

Haftar has presented himself as a strong hand who can restore stability. In recent years, his campaign against militants across Libya has won him growing international support from world leaders who say they are concerned the North African country has turned into a haven for armed groups, and a major conduit for migrants bound for Europe. His opponents view him as an aspiring autocrat and fear a return to one-man rule.

Sarraj said all Libyans who “call for a peaceful and democratic solution” would take part in his proposed talks. There would be “no place for those who seek tyranny and dictatorship,” he added, while calling on the UN to support the forum and to oversee elections.

He did not say whether Haftar or his representatives would be included.

Sarraj also said that he was not prepared to sit down with Haftar to negotiate an end to the two-month offensive against Tripoli.

“I will not sit down again with this person because what he has done in past years shows he won’t be a partner in the political process,” Sarraj said.

Sarraj also demanded an international probe into alleged “war crimes and crimes against humanity,” since Haftar launched his offensive.