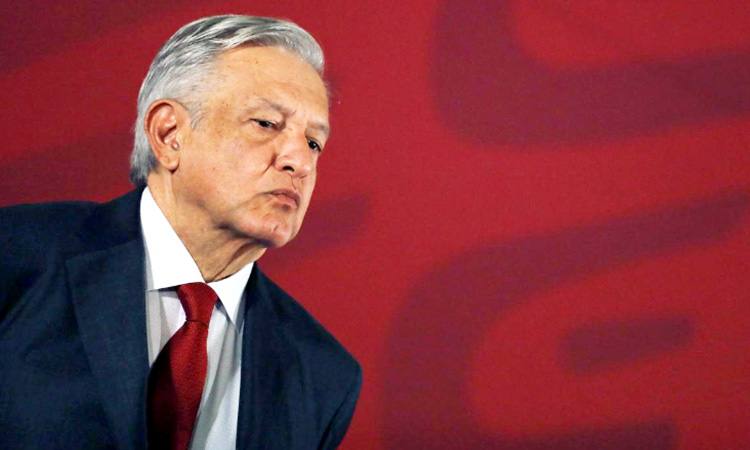 Mexican President Andrés Manuel López Obrador said on Saturday his country must help Central Americans fleeing poverty and violence, even as it increases security and revisions to deter migrants from passing through Mexico on route to the US.

Mexico plans to deploy 6,000 National Guard troops by Tuesday to its southern border with Guatemala to slow the arrival of migrants and The Associated Press saw Mexican soldiers with black National Guard armbands stationed just north of the Guatemalan border on Saturday.

A checkpoint near Ciudad Cuauhtemoc in southern Chiapas state was manned by nearly 10 soldiers with black armbands together with federal police and immigration officers.

At another checkpoint just north of Comitan in Chiapas, about a dozen apparent National Guardsmen drove around backroads in the rain and dark, looking for migrants but not finding any.

The AP followed them in another vehicle.

Mexico’s president has walked a fine line between enforcement and humanitarian overtures for migrants since he took office on Dec.1.

Initially his administration issued thousands of transit visas for safe passage through Mexico, only to clamp down shortly after with stepped up detentions and deportations.

“The truth is that there is a great humanitarian crisis in Central America and many people out of necessity have set out to look for a life in the United States and they pass through our territory,” said López Obrador, speaking in the northern state of Chihuahua.

López Obrador said the refusal to help foreigners in need is “anti-Christian,” adding that “we can’t turn our backs on them.”

He is lobbying for international development aid to help Central Americans stay in their countries of origin.

He said on Saturday that 80 per cent of the migrants crossing through Mexico, and towards the US, are from Central America.

Mexico has offered refuge to migrants with credible fears as thousands remain in the country while they await court dates for asylum petitions in the US.

The understaffed and underfunded Mexican refugee commission faces a backlog of cases.

But in recent months, police and immigration have stepped up enforcement in southern Mexico, setting up highway checkpoints, raiding a caravan of mostly Central American migrants and trying to keep people off the northbound train known as “the beast.”

At the same time, Mexicans have grown increasingly intolerant of the large numbers of migrants passing through their country in an attempt to reach the US.

A June poll in Mexican newspaper El Universal showed that Mexicans are less receptive to allowing undocumented migrants to come in, or to stay on permanently as refugees, than they were in October, when caravans with thousands of Central American migrants were winding their way north.

A majority of Mexicans that participated in the survey said they favor barring entry to migrants who try cross into Mexico without visas, and a majority now say that Mexico should not offer them refugee status.

Mexico’s southern border is porous and difficult to patrol, with dense jungle and rivers.

On Friday, a sociologist who served as Mexico’s immigration chief resigned and was replaced by the country’s director of prisons.

Foreign Relations Secretary Marcelo Ebrard said an additional 825 immigration agents will be sent to the southern border next week.

Alejandro Murat, governor of the southern state of Oaxaca, applauded the stepped up enforcement and controls. “For the first time, there will be order on the southern border that will allow us to have the identity and control of who is in the national territory,” said Murat on Friday.

Separately, a US Border Patrol facility in Texas came under new scrutiny on Saturday after a teenage mother was found there with a premature baby.

Immigrant advocates expected the facility in the US-Mexico border city of McAllen to allow doctors inside to conduct health assessments, but it was not immediately clear whether those assessments took place.

The 17-year-old mother was from Guatemala and had an emergency cesarean section in Mexico in early May before crossing the border with the baby in June, said Hope Frye, a volunteer with an immigrant advocacy group.