Video: Thousands of doctors go on strike in India to demand safety after attack - GulfToday 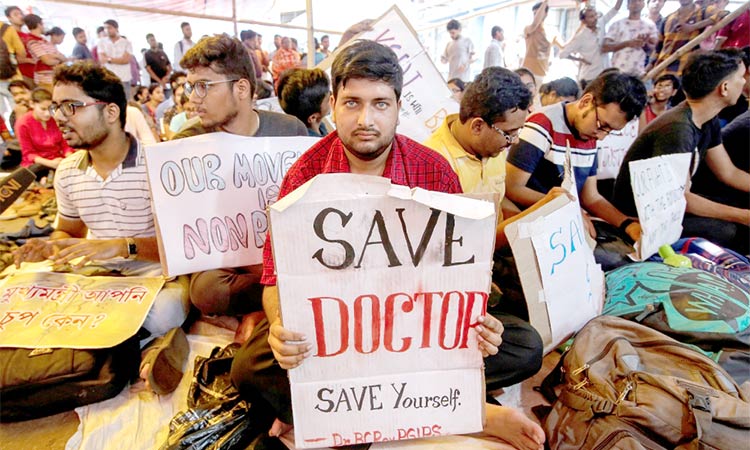 A doctor holds a placard at a government hospital during a strike in Kolkata, India, on Friday. Reuters

Thousands of doctors across India went on strike on Friday to demand better security at hospitals days after junior doctors in the city of Kolkata were attacked, leaving services in many government-run health facilities paralysed.

The protests were sparked by an attack at the NRS Medical College in Kolkata on June 10 that left three junior doctors seriously injured after a dispute with a family whose relative had died.

Doctors demanding better security began a strike but their action was confined to the state until West Bengal Chief Minister Mamata Banerjee condemned them on Thursday, saying police did not strike when one of their colleagues was killed.

Banerjee's remarks, which included a warning that junior doctors would be evicted from their college hostels if they did not go back to work, triggered a nationwide reaction. 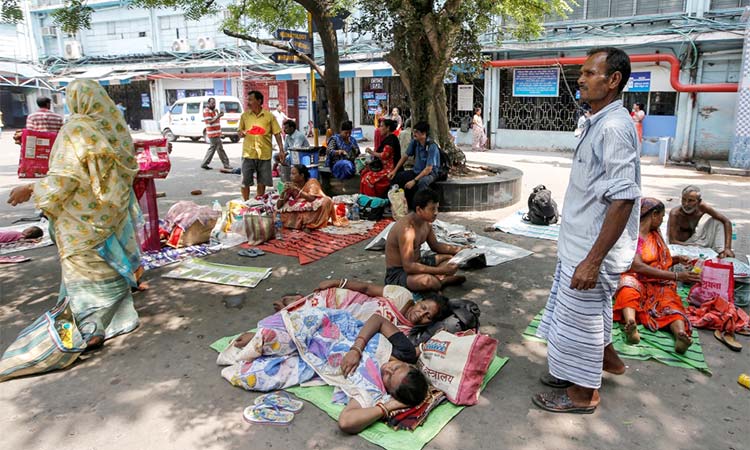 Patients and their relatives wait for treatment at a government hospital during a strike by doctors in Kolkata. Reuters

The Indian Medical Association said the "barbaric" attack at the NRS reflected a national problem, and called for a countrywide protest. It also demanded legislation to safeguard doctors.

Nearly 30,000 doctors were on a one-day strike on Friday, most in West Bengal, New Delhi and the western state of Maharashtra, according to figures proved by medical associations.

The federal health minister, Harsh Vardhan, tried to calm the furoure, promising better security at hospitals and calling on Banerjee to withdraw her ultimatum.

"I urge doctors to end their strike in the larger interest of society. I will take all possible measures to ensure a safe environment for them at hospitals across the country," Vardhan said on Twitter.

India spent an estimated 1.4% of its gross domestic product on healthcare in 2017/18, among the lowest proportions in the world. Many millions of Indians depend on the cheap but inadequate public health system.

Saradamani Ray, whose 77-year old father is a patient at the NRS Medical College, said she would have to move him because of the strike.

"I will have to take my father somewhere else for his dialysis, maybe a private hospital," she told Reuters.

"It will cause a lot of financial strain, but there's nothing I can do. I will have to pay."

Meanwhile, Chief Minister Mamata's nephew Abesh Banerjee, who is a medical student, on Friday came out in support of the protesting doctors at the state-run hospitals.

Abesh, whose Facebook bio describes him as the President of KPC Medical College and Hospital, was seen at a rally holding a placard that read: "You say we are Gods!! Why Treat us like Dogs?" 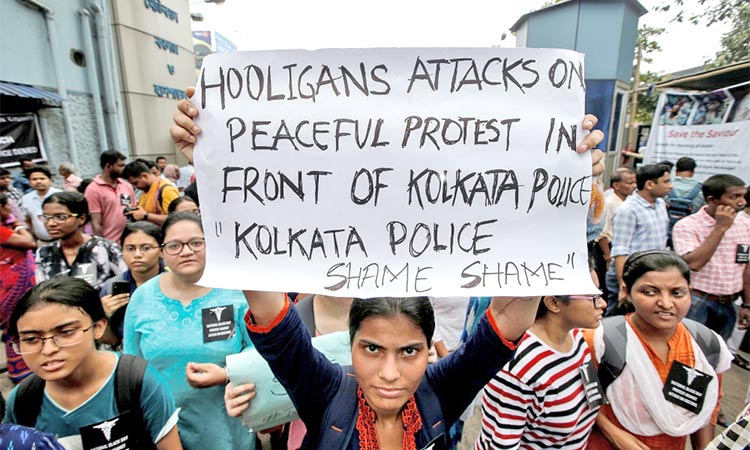 A doctor holds a placard at a government hospital during a strike in Kolkata on Friday. Reuters

"Dr Abesh Banerjee, nephew of Mamata Banerjee at KPC hospital Kolkata!!#SaveTheDoctors," another doctor tweeted sharing his picture.
Earlier, Kolkata Mayor and state Minister Firhad Hakim's daughter, a doctor, criticised the government's handling of the ongoing doctors' strike and said medicos had the right to "peaceful protest" and "safety at work."

In a Facebook post, Shabba Hakim asked people to question why "goons were still surrounding hospitals and beating up doctors".
"As a TMC supporter I am deeply ashamed at the inaction and the silence of our leader," Shabba Hakim said on the social networking site close to Wednesday-Thursday midnight. Till then Banerjee had remained silent on the issue.

To those saying "Onyo rugider ki dosh? (what is the fault of the other patients?)", Shabba Hakim suggested they should question the government as to why the police officers posted in government hospitals did little to nothing to protect the doctors.
"Please question them that when 2 truckload of goons showed up and why wasn't a back-up sent immediately? Please question why goons are still