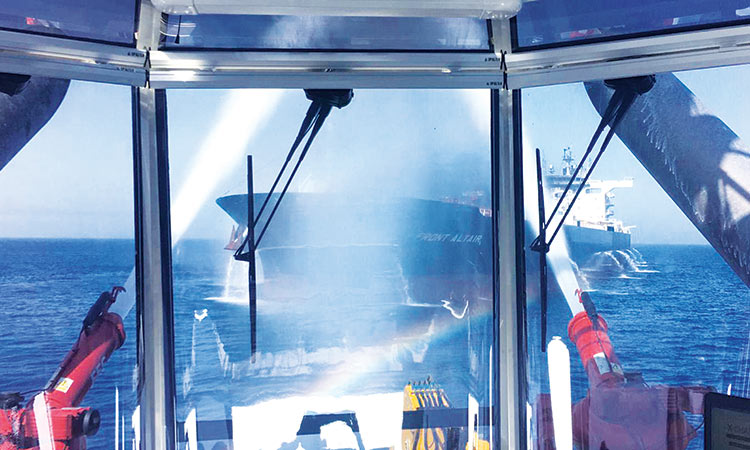 A photo of the crude oil tanker Front Altair during the firefighting on board the ship in the Gulf of Oman on Thursday. Reuters

The latest incident, the second in the Gulf of Oman in a month, came amid spiralling tensions between Tehran and Washington, which has pointed the finger at Iran over earlier tanker attacks in May.

At the request of the United States, the Security Council was to meet behind closed doors later on Thursday to discuss the situation in the Gulf.

Guterres said he strongly condemned any attack against civilian vessels.

“Facts must be established and responsibilities clarified,” the UN secretary-general told a council meeting on UN cooperation with the Arab League.

“If there is something the world cannot afford, it is a major confrontation in the Gulf region.” US acting Ambassador Jonathan Cohen said it was “unacceptable for any party to attack commercial shipping,” stopping short of blaming Iran.

“Iran remains the most significant threat to regional peace and security, engaged in numerous malign activities in the region,” he told the council.

The Norwegian Maritime Authority said three explosions were on Thursday reported on board the Norwegian-owned tanker Front Altair after it was “attacked” along with the Singapore-owned ship Kokuka Courageous.

Iran said its navy had rescued 44 crew members after the two vessels, which were carrying highly flammable material, caught fire.

Arab League Secretary-General Ahmed Aboul Gheit warned both the targeting of oil tankers and attacks against Saudi Arabia were “dangerous developments.” Yemen’s Iran-aligned Houthi rebels said they had fired missiles on an airport in southwestern Saudi Arabia on Wednesday.

“Some parties in the region are trying to instigate fires in our region and we must be aware of that,” Gheit told the council.

Two oil tankers near the strategic Strait of Hormuz came under a suspected attack on Thursday, setting one of them ablaze in the latest mysterious assault targeting vessels in a region crucial to global energy supplies amid heightened tension between Iran and the US.

The US Navy, which rushed in to assist the stricken vessels in the Gulf of Oman off the coast of Iran, and the ship’s operators offered no immediate explanation on what weapons caused the damage or who used them against the MT Front Altair and the Kokuka Courageous. Each was loaded with petroleum products, and the Front Altair burned for hours, a fire that charred half of one of the vessel’s sides and sent up a column of thick, black smoke.

Last month, the US alleged that Iran used limpet mines to attack four oil tankers off the nearby Emirati port of Fujairah. Iran denied being involved then and its foreign minister called the timing of Thursday’s incidents suspicious, given that Japanese Prime Minister Shinzo Abe was meeting Supreme Leader Ayatollah Ali Khamenei in Tehran.

Iran previously used mines against oil tankers in 1987 and 1988 in the “Tanker War,” which saw the US Navy escort ships through the region. Regardless of who is responsible, the price of a barrel of benchmark Brent crude spiked as much as 4% immediately after the attack, showing how critical the region remains to the global economy.

“The shipping industry views this as an escalation of the situation, and we are just about as close to a conflict without there being an actual armed conflict, so the tensions are very high,” said Jakob P. Larsen, head of maritime security for BIMCO, the largest international association representing ship owners.

The suspected attacks happened at dawn on Thursday some 40 kilometres (25 miles) off the southern coast of Iran. The Norwegian-owned Front Altair, loaded with naptha from the United Arab Emirates, radioed for help as it caught fire. A short time later, the Japanese-owned Kokuka Courageous, loaded with methanol from Saudi Arabia and Qatar, also called for help.

The US Navy sent a destroyer, the USS Bainbridge, to assist, said Cmdr. Joshua Frey, a 5th Fleet spokesman. He described the ships as being hit in a “reported attack,” without elaborating.

US President Donald Trump “has been briefed on the attack,” said White House press secretary Sarah Sanders. “The US government is providing assistance and will continue to assess the situation.”