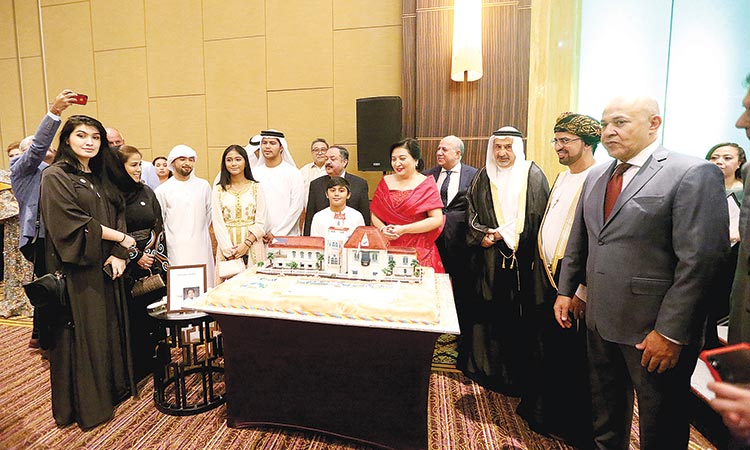 The ambassador traced the Philippines’s emancipation from its 300 years of Spanish colonisation since1521, to the progress it has achieved under the Duterte Administration, and the furtherance of the diplomatic and bilateral relations between Abu Dhabi and Manila since June 17, 1980.

The distinguished guests led by UAE Ministry of Foreign Affairs and International Cooperation Undersecretary Ahmed Sari Al Mazrouei and the Diplomatic Corps in the capital, were also treated to a well-conceptualised and refreshing night of Philippine history, arts and culture.

Before the formal ceremonies and Filipino dinner buffet at 7.30pm at the Dusit Thani, the guests witnessed and took time to go over the “Islamic Philippines” exhibit of world-renowned Filipino artist Manuel Baldemor who has been travelling to over 50 countries to share his talent and his works such as murals, installed.

The septuagenarian Southern Tagalog region painter told journalists he worked on the 30 pieces of acrylic/mixed media paintings solely for the Philippine Independence Day celebrations in the UAE from April to May this year. He took into consideration the host government’s Islamic culture.

Quintana met Baldemor’s son, the late Marvin Baldemor, in Ireland in late 2018. She wanted a “father-son exhibition tandem” since Marvin, a nurse, also followed his dad’s footsteps. But, Marvin had passed on in January 2019.

“Marvin told me about (the planned exhibition). I looked forward to it,” said Baldemor.

Baldemor’s “Islamic Philippines” would continually be exhibited at the Etihad Modern Art Gallery in Abu Dhabi where he was scheduled to conduct art workshops with children on Thursday.

Baldemor would touch base with Filipino artists in Dubai and the Northern Emirates next week.

Quintana delivered her speech before the ceremonial cutting of the huge rectangular diplomatic reception cake not only with the distinguished guests but also with Emirati-Filipino children in the capital. She acknowledged the UAE as the home away from home to over 700,000 Filipinos.

The cake was symbolic. It carried not only the Philippine national flag but also the full replica of the mansion of the First Philippine Republic President Emilio Aguinaldo in Kawit, Cavite who first waved the flag from the front balcony on June 12, 1898.

n “Relations between (the UAE and the Philippines) remain close” with the continuing exchange of high level visits, the convening of political consultations between the two foreign ministries hopefully within the year, the signing of agreements on combatting human trafficking and enhancing judicial and consular cooperation.

n “The Philippines hopes to establish the Office of the Defence and Armed Forces Attache in Abu Dhabi as another way of enhancing cooperation with the UAE.”

n “The UAE has now become the Philippines’s largest trading partner in the Middle East since 2017 and the country will endeavour to enhance cooperation with the UAE in the areas of Islamic finance, renewable energy and food security.

n “The Philippine missions in the UAE are accelerating preparations for the Expo 2020 Dubai,” which Filipinos would be proud of.

n “Both the Philippines (in Southeast Asia) and the UAE (in the Gulf) are experiencing strong growth (as both their governments aspire to have their citizens enjoy) an inclusive and progressive nation.”

n  “(Both countries) are one in rejecting extremist ideologies while encouraging tolerance and mutual respect. (Both governments) have had outstanding gains in the area of competitiveness and gender equality and are fully committed in advancing sustainability, inclusion and positive social change.”

n “The Philippines aims to be a prosperous upper middle class society by 2040” as the Duterte Administration began liberalizing investment rules to lure more foreign capital and investments to improve transportation and communication networks, and the 50-year-old peace process in Mindanao, Southern Philippines seriously attended to.