Turkey says ceasefire not yet secured in Syria’s Idlib - GulfToday 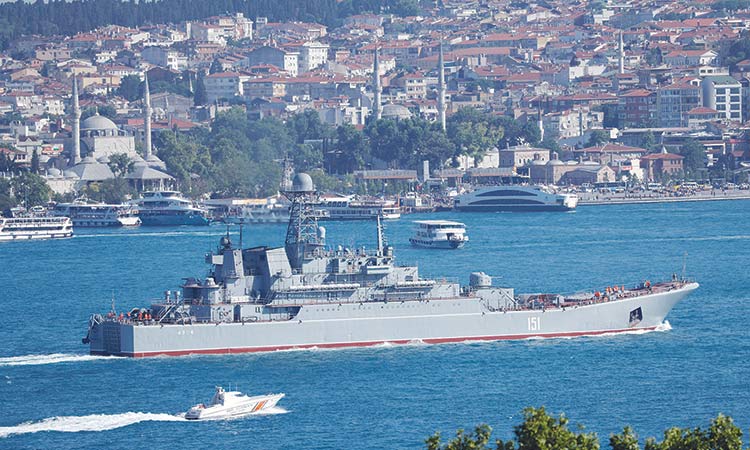 The Russian Navy’s landing ship Azov sails in the Bosphorus, on its way to the Mediterranean Sea, in Istanbul, Turkey, on Thursday. Reuters

“We are working hard with Russia to stop these attacks. It is not possible to say a complete ceasefire has been secured,” Cavusoglu told a press conference with his French counterpart Jean-Yves Le Drian in Ankara.

Moscow announced a ceasefire was brokered with Turkey in the Idlib de-escalation zone as of midnight on June 12, after weeks of escalating rocket fire and air strikes by the Syrian regime and Russian forces.

Cavusoglu said there were “serious and sincere efforts” with Moscow to stop the violence, but said a full cessation had not been realised.

“If the regime continues these attacks, we will do what is necessary,” Cavusoglu said and called on Russia and Iran, who support the Syrian government, to “fulfil their responsibility”.

Russia’s defence ministry said the attack on the Turkish post was actually the work of “terrorists” and that it had responded with air strikes.

“On the night of June 13, terrorists bombed Turkey’s military forces” in Idlib, it said in a statement.

“With the coordinates provided by the Turkish side, Russian planes carried out four strikes... destroying a large group of fighters.”

Idlib is supposed to be protected from a massive regime offensive by a buffer zone deal signed between Russia and rebel backer Turkey in September.

But it was never fully implemented, as militants refused to withdraw from the planned demilitarised zone.

The Syrian government and Russia have upped their bombardment of the region since late April, killing more than 360 civilians, according to the Syrian Observatory for Human Rights, a Britain-based war monitor.

Cavusoglu accused Syrian President Bashar Al Assad of seeking a military rather than a peaceful solution.

“We are seeing the increased attacks by the regime, especially targeting hospitals, schools and civilians recently in Idlib,” he said. “This is a disaster in every manner.” Le Drian said the priority in Idlib must be to “restore calm and serenity to avoid a new humanitarian disaster.” “We call on the Syrian regime and its supporters to stop their indiscriminate attacks against civilians in Idlib,” he said.

Syria’s war has killed more than 370,000 people and displaced millions since it started in 2011 with the repression of anti-government protests.

Russia launched a military intervention in support of Assad in 2015, helping his forces to reclaim large parts of the country from opposition fighters and militants.

Separately, Kurdish authorities in northeast Syria on Thursday handed over five orphans born to families belonging to the Daesh group to the Belgian authorities, an official said.

“At the request of the Belgium government, the self-administration of North and East Syria handed over on June 13th, 2019, five orphaned Belgian children from Daesh families to a delegation from the Belgium ministry of foreign affairs in the town of Ain Issa,” foreign affairs official Abdulkarim Omar wrote on Twitter.

Belgium earlier said it would bring six orphans home from Kurdish-controlled camps in Syria after the deaths of their extremist parents.

It was not immediately clear why only five had been handed over to the Belgian delegation.

“These are children who were born in our country and who today no longer have parents,” Belgian Finance Minister Alexander De Croo told VRT public radio.

Belgium is one of several European countries wrestling with the dilemma of what to do about citizens trapped in Syria following the defeat of the Daesh.

Some are reticent to accept captured extremist fighters, but the cases of children and non-combatant wives have proved more complicated for Western authorities.