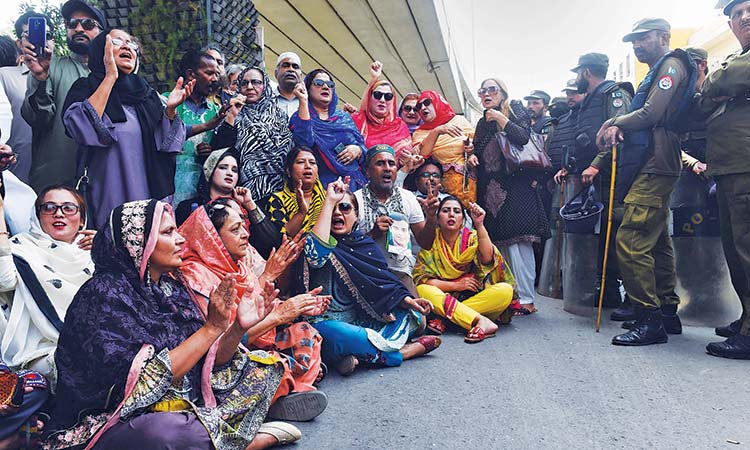 Activists of Pakistan Muslim League Nawaz shout slogans outside the court before the arrival of Hamza Shahbaz in Lahore on Wednesday. Agence France-Presse

The National Accountability Bureau (NAB) was on Wednesday given a 15-day physical remand of leader of opposition in the Punjab Assembly Hamza Shahbaz following his arrest a day earlier.

The Pakistan Muslim League-Nawaz (PML-N) vice-president was presented before an accountability court of Lahore amid tight security.

Hamza has been under NAB investigation in cases involving Ramzan Sugar Mills and assets beyond known means of income.

The NAB prosecutor sought Hamza Shahbaz’s physical remand claiming he failed to explain money transfer to foreign countries during its investigation. In order to probe the suspicious transactions, said said that Hamza Shahbaz’s remand was needed.

The NAB claims to have found evidence of money laundering on a massive scale through which Hamza and his family allegedly accumulated assets in Britain.

It said that allegedly illegally accumulated assets are worth Rs85 billion to Rs100 billion and were bought during Shehbaz Sharif’s tenure as the chief minister of Punjab.

The NAB claimed to have found that Hamza Shahbaz’s declared assets in 2003 were worth less than Rs20 million, which increased by almost 2,000% to over Rs410 million after his father became the chief minister.

Similarly, his younger brother Suleman’s personal wealth increased by 8,500 times and he now owns assets worth more than Rs3 billion.

The investigation started when NAB discovered “the huge volume of suspicious cash transactions” in the bank accounts of Hamza, Suleman and other family members. The Financial Monitoring Unit of NAB forwarded an application to its chairman on January 12, 2018 to investigate the transactions. An inquiry was allowed in October 2018 and later its status was turned into an investigation.

On April 3 this year, NAB arrested two suspects, Qasim Qayyum and Fazal Dad Abbasi, after founding evidence against them of their involvement in money laundering and other corrupt practices.

Meanwhile, a First Information Report has been filed against PML-N workers after constables of the Lahore Police were injured in a scuffle following Hamza’s arrest on Tuesday.

According to police officers, they were present at GPO Chowk for law and order duty following a LHC verdict, which allowed NAB to arrest Hamza.