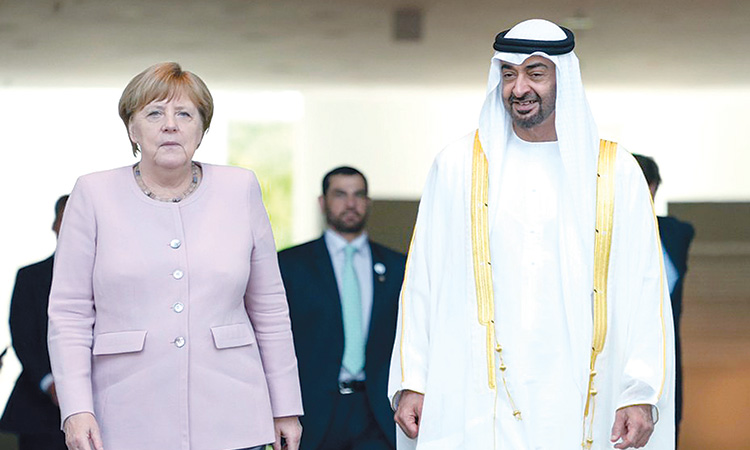 They discussed the means of strengthening the strategic partnership between the UAE and Germany, as well as several regional and international issues of common interest.

During the meeting, which was attended by Sheikh Mansour Bin Zayed Al Nahyan, Deputy Prime Minister and Minister of Presidential Affairs, and Sheikh Abdullah Bin Zayed Al Nahyan, Minister of Foreign Affairs and International Cooperation, both sides discussed the cooperation and partnerships in the areas of economy, industry, energy, technology, culture and education, as well as ways of expanding them to new sectors to achieve the ambitions of their peoples for development and prosperity.

Sheikh Mohamed then said the growing relations between the two countries are strong and diverse, have witnessed progress in many areas, and have created many opportunities for future development and growth.

He said the UAE is keen to coordinate with Germany on issues affecting the Arabian Gulf and the Middle East.

He added that both countries believe in maintaining regional security, guaranteeing the safety of international navigation, rejecting interference in their internal affairs, combatting extremism and terrorism and rejecting hatred, as well as ensuring peace and stability in the region, which is of strategic importance to the entire world.

Sheikh Mohamed then stressed that the UAE has established close relations with many countries, most notably Germany, based on mutual interests, respect and joint cooperation, to establish peace and stability and achieve regional and international development.

During the meeting, Merkel highlighted her country’s keenness to consolidate its friendship with the UAE, stating that it is looking forward to serve the interests of both peoples, and enhancing both nations’ coordination on regional and international issues of mutual concern. She also expressed her wishes for better health to President His Highness Sheikh Khalifa and further advancement and prosperity to the UAE.

At the end of the meeting, both sides affirmed that they would continue to strengthen the existing strategic relations and enhance their economic and commercial cooperation.

They will increase their efforts to combat extremism, terrorism and violence, and encourage the international community to promote peace, coexistence, understanding and tolerance, and maintain security and stability in the region.

Also on Wednesday Sheikh Mohamed met a number of Emirati students studying in German universities and institutions, on Wednesday.

Sheikh Mohamed expressed his happiness at meeting them and was reassured them on their educational conditions.

During the meeting, Sheikh Mohamed urged the students to continue exerting their utmost efforts to achieve educational excellence in all specialties to contribute, along with their colleagues, to the country’s development and prosperity.