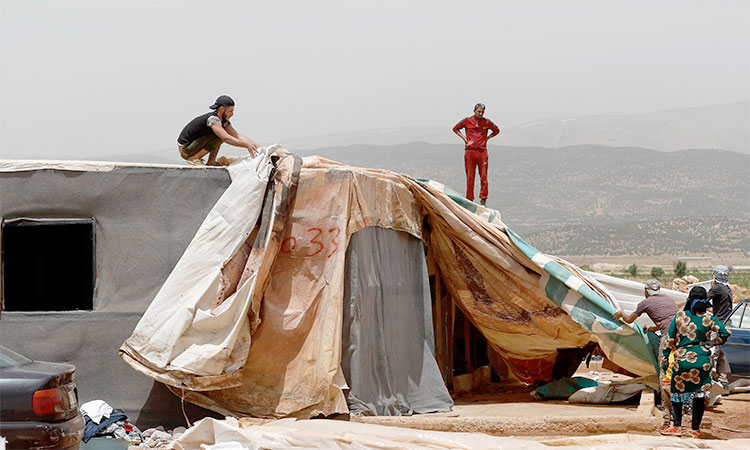 They said war planes flying at high altitude, which monitors said were Russian Sukhoi jets, dropped bombs on the village of Jabala in southern Idlib province, with rescuer teams so far pulling out 13 bodies, including women and children.

Russian jets were also behind several raids that hit the town of Khan Sheikhoun, Kfar Batikh and several other villages that left at least another 12 civilians dead, according to another local rescuer.

Rescuers say the major aerial campaign that Moscow has thrown its weight behind since it was launched in earnest at the end of April has killed over 1,500 people with more than half of the death toll civilians.

Residents and local and international aid agencies that support the rebel-held areas say the sustained campaign that has bombed schools and knocked down medical centres was to smash the spirit of civilians in opposition areas.

More than 300,000 people have fled the frontlines to the safety of areas near the border with Turkey, U.N. and aid agencies say.

The Russian-backed offensive has so far failed to make major inroads into rebel territory in northern Hama and southern Idlib provinces, where mainstream rebels backed by Turkey alongside extremist fighters are putting up fierce resistance in their last remaining bastion in Syria.

Russia and the Syrian army deny allegations of indiscriminate bombing of civilian areas or a campaign to paralyze everyday life in opposition-held areas and say they are fighting al-Qaeda-inspired militants.

Moscow blames the rebels for breaking a truce by hitting government-held areas and says Turkey has failed to live up to its obligations under a deal brokered last year that created a buffer zone in the area that obliges it to push out militants.

Civilians in rebel-held areas, where many oppose returning to Syrian President Bashar al-Assad’s one-party rule, look to Turkey which has steadily built up a military presence in the area as a protector against the Russian-led strikes.

Northwest Syria — including Idlib province and parts of neighbouring provinces — has an estimated 3 million inhabitants, about half of whom had already fled fighting elsewhere, according to the United Nations.

Turkey killed 10 Kurdish militants in Syria’s Tel Rifaat region on Sunday in retaliation for an attack that killed a Turkish soldier, the Turkish Defence Ministry said on Tuesday.

Turkey says the Kurdish YPG militia in Syria is part of the PKK militant group, which it designates a terrorist group and which it has been fighting for more than 30 years.

The United Nations warned on Monday that up to 2 million refugees could flee to Turkey if fighting intensifies in northwestern Syria as aid funds run dangerously low.

Battles intensified in northwest Syria on Friday after insurgents mounted an attack to repel an army offensive that has pounded the country’s last major rebel stronghold for weeks.

State news agency SANA said the army absorbed the new attack and reinforced its frontline positions after fierce clashes with militants overnight. It said insurgents fired shells at a village in the northern Hama countryside.

Insurgent factions said they seized three key villages in the Hama countryside late on Thursday in their counterattack.

They denied reports that government forces had recovered the positions and said army units were suffering heavy losses as fighting raged on Friday.

The violence in Idlib province and a strip of nearby Hama has marked the biggest military escalation between Assad and his insurgent enemies since last summer. Tens of thousands of people have fled their homes, many of them sheltering at the Turkish border from air strikes that have killed scores of people.

The bombing has shut down 55 medical facilities since late April, the UOSSM aid group that operates in opposition territory said on Friday.

Turkey has complained to Moscow, which backs the Syrian government, while Russia says the onus is on Ankara to rein in the rebels.