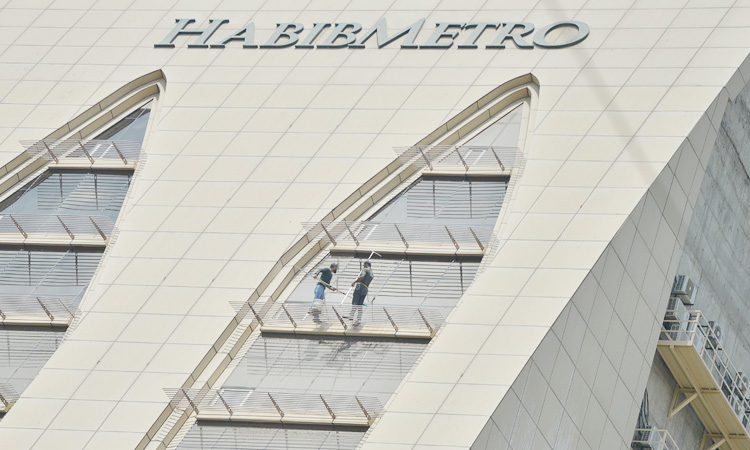 Pakistani workers clean the windows of a bank building in Karachi on Monday. Pakistan has had 21 bailouts since it joined the IMF in 1950. Its most recent loan was issued in 2013, worth $6.6 billion. Rizwan Tabassum / AFP

Pakistan Prime Minister Imran Khan’s government was set to present an austerity-focused budget on Tuesday, weeks after the country reached an agreement with the International Monetary Fund for a $6 billion bailout.

The presentation of Khan’s first budget comes just a day after the government released the latest round of bleak economic figures for the cash-strapped country, showing growth for the current fiscal year falling to 3.3 per cent — well below the 6.2 per cent target.

The release of the figures comes as discontent simmers in Pakistan following repeated devaluations of the rupee, soaring inflation, and increasing utility costs.

The economic pain follows months of failed efforts by Khan’s administration to stave off ballooning fiscal and balance of payments deficits, along with low tax yields and mounting debt.

“Prime Minister Imran Khan has committed to... trying to correct things permanently even if we go through hard times for six months or one year or one and a half years,” said the country’s finance advisor, Abdul Hafeez Sheikh, late on Monday.

Earlier on Monday, Khan took to the country’s airways for the second time in recent weeks to plead with Pakistanis to declare their assets in the latest scheme aimed at increasing tax revenues.

Pakistan has struggled for decades to collect taxes with estimates suggesting that only around one per cent of the 200-million strong population filed a return in 2018.

The agreement eked out with the IMF still needs final approval by the fund’s board, and it is widely believed the body is waiting for the presentation of the budget before giving the final sign-off.

Analysts have warned the IMF deal would likely come with myriad restrictions that could bridle Khan’s grand promises to build an Islamic welfare state, as the country is forced to tighten its purse strings.

Pakistan’s increasing economic woes also come as the country is facing possible sanctions from the Financial Action Task Force — a money-laundering monitor based in Paris — for failing to rein-in terror financing.

The organisation will decide soon whether to add Pakistan to a blacklist that would trigger automatic sanctions, further weakening an already-faltering economy.

To add to its troubles, the United States has also warned it will be watching closely to ensure Pakistan does not use IMF money to repay debts to China, which has poured billions into the country for infrastructure projects under its Belt and Road Initiative.