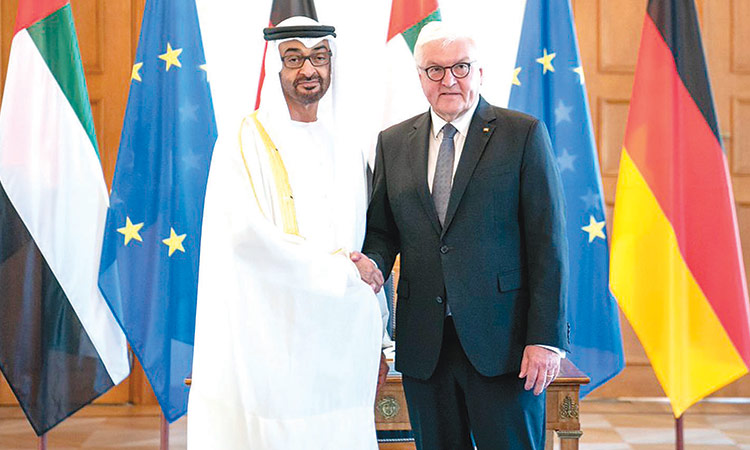 His Highness Sheikh Mohamed Bin Zayed Al Nahyan, Crown Prince of Abu Dhabi and Deputy Supreme Commander of the UAE Armed Forces, discussed with German President, Frank-Walter Steinmeier, ways to enhance cooperation and friendship ties between the two countries in addition to an array of issue of common interest.

This came as the German President received Sheikh Mohamed at the Bellevue Palace in Berlin as part of his two-day state visit to Germany.

Sheikh Mohamed conveyed the greetings of President His Highness Sheikh Khalifa Bin Zayed Al Nahyan and his best wishes of progress and stability for the friendly German people.

The UAE and the Federal Republic of Germany, says Sheikh Mohamed, are anchors for peace and stability in their respective regions, and are "partners in the drive toward boosting tolerance and co-existence among human beings."

He added that the two countries share identical views on rejection of terrorism and the need to confront the forces that support it, affirming that the UAE-German relations are based, since their establishment, on appreciation, mutual respect and common interest.

"The UAE attaches special importance to its relations with the Federal Republic of Germany and is keen on enhancing ties between the two countries, especially in the areas related to economy, technology, innovation, scientific research among others."

The Crown Prince of Abu Dhabi emphasised that relations between the UAE and Germany are not limited to political, economic and technological fields, but also extend to cultural and educational domains.

The German President accompanied Sheikh Mohamed in a tour of the Bellevue Palace where they exchanged cordial talk about the friendship ties between the two countries.