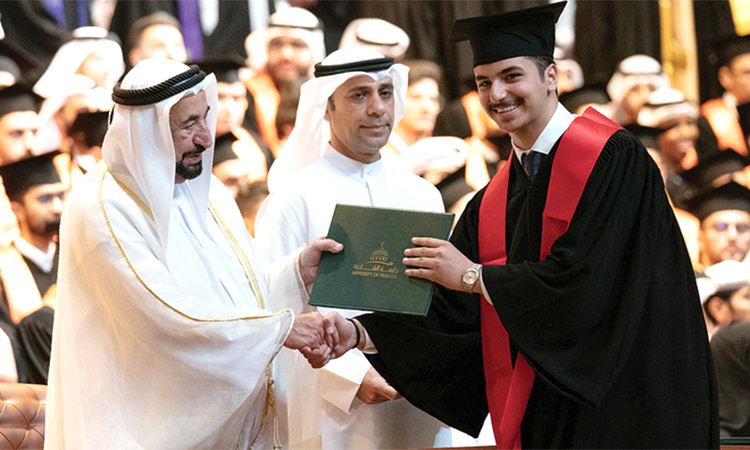 Sheikh Sultan hands over a graduation certificate to a student. WAM

His Highness Dr Sheikh Sultan Bin Mohammed Al Qasimi, Supreme Council Member, Ruler of Sharjah and President of the University of Sharjah (UoS), affirmed that the UoS constantly worked to qualify its students according to a multi-aspect methodology through specialised scholars and professors tasked with developing its capabilities and bringing it on a par with top universities at the local, regional and global levels, adding that this enabled the UoS to achieve many of its objectives and sign many significant agreements with various prestigious universities and research centres.

This came during Sheikh Sultan’s speech to the graduation ceremony of the UoS’ 280 graduates holding bachelor’s and diploma’s degrees of various majors, which was held at the University City Hall on Monday.

Congratulating the graduates, parents and teaching staff, Sheikh Sultan expressed his pride in the distinguished achievements of the graduates, underscoring their important role that they play in the UAE’s society.

A number of directors of government departments as well as members of the board of trustees and administrative and teaching staff members were also present. Later, Sheikh Sultan handed the graduation certificates over to the graduates, wishing them success in their careers.

He then left the hall after shaking hands with the deans of colleges and teaching staff members, valuing their efforts in qualifying the graduates.

On Saturday also Sheikh SUltan attened the the graduation ceremony of 249 students of the university’s higher studies held at the University City Hall in the presence of Sheikh Sultan bin Mohammed bin Sultan Al Qasimi, Crown Prince and Deputy Ruler of Sharjah.

Ruler of Sharjah congratulated the graduates and said, “We are proud of this cohort and we would like to congratulate you, the students; your families and the governmental and private entities that you come from. We also congratulate ourselves on these fruits of labour that we are harvesting today. We have all the faith in you and we are assured that you will use the knowledge and expertise that you gained during your studies to better serve this nation.”

Highlighting the future plans for UoS, Sheikh Sultan said, “We are happy to announce that the number of approved higher studies will raise as of September to over 50 Masters and PhD programmes in various medical, health, engineering, scientific and humanities disciplines.”