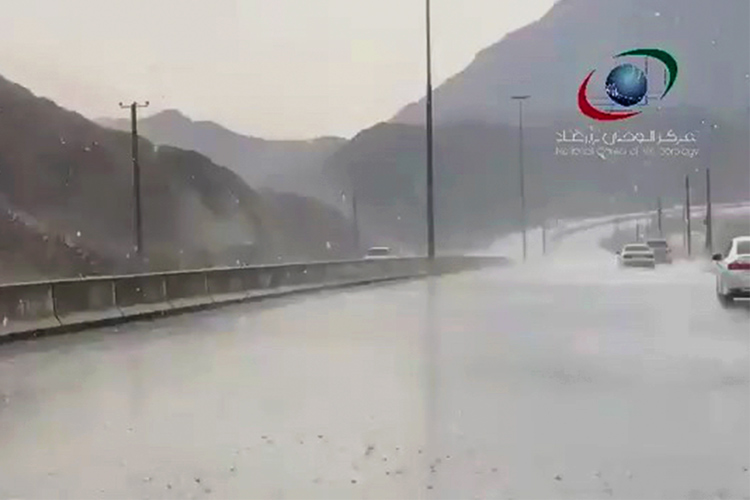 
Various areas in the country witnessed light to heavy rain on Monday, as a result of formation of cumulus clouds towering over some inland and eastern areas.

The NCM expects that the weather today will be fair to partly cloudy in general and hazy at times, relatively humid by night and early morning over some coastal areas. Light to moderate southeasterly winds may become northwesterly by the afternoon, freshening at times over some internal areas. They may blow dust and sand, leading to poor horizontal visibility during the daytime, with a speed of 25–35km/hr, reaching 45Km/hr. Sea will be slight to moderate in the Arabian Gulf and in Oman Sea.

On Wednesday, it is expected to remain fair in general and hazy at times, with humid weather at night and early morning over some western coastal areas. Light to moderate southeasterly winds could become northwesterly, freshening at times over some internal areas, blowing dust and sand that may lead to poor horizontal visibility during the daytime.

The Public Prosecution in Dubai referred an Asian young man, 34, to the Criminal Court over possessing 3 kg of the psychotropic substance “methamphetamine” for peddling purposes.

The Court also looked into the case of a European man, 53, accused of attempting to smuggle 10kg of cocaine through the transit hall at Dubai airport.

In the details of the first case, a gang of four persons intended to smuggle 4kg of banned narcotics into the UAE and Saudi Arabia.

The gangsters connived to hand over 3kg of the narcotics in the emirate of Dubai.

Upon questioning the suspect, he confessed to coordinate with others in an Asian country to hand over the methamphetamine in Dubai and then transfer it to Saudi Arabia for peddling.

In the second case, the Dubai Public Prosecution referred a European man to the Criminal Court, after he had been caught at the airport, while attempting to smuggle 10 kilogrammes of cocaine in his travel baggage. The drugs were found in 10 bags weighing one kilogramme each.