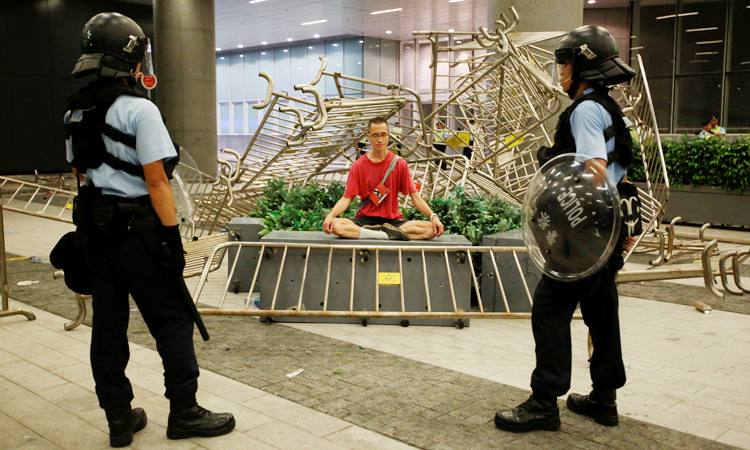 Police officers stand near a protester sitting during a protest to demand authorities scrap a proposed extradition bill with China, outside the Legislative Council in Hong Kong, China early on Monday. James Pomfret/ Reuters

Riot police surrounded Hong Kong’s parliament on Monday after authorities said they would go ahead with a proposed extradition law, which would allow suspects to be sent to mainland China, despite protests from an estimated crowd of more than a million.

What began as a peaceful protest through the centre of the global financial hub descended into violence early on Monday as several hundred protesters clashed with police, who responded with pepper spray before the standoff ended soon after.

The protests plunged Hong Kong into a new political crisis, heaping pressure on Hong Kong Chief Executive Carrie Lam’s administration and her official backers in Beijing. Veteran lawmakers have called on her to resign. 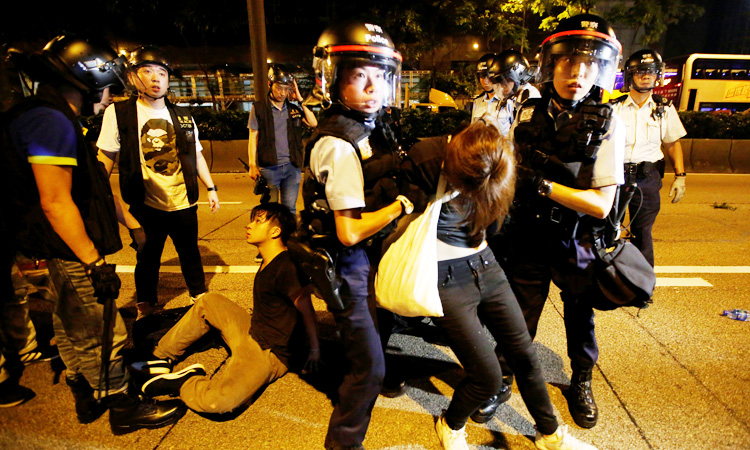 Sunday’s demonstration capped weeks of growing outrage in the business, diplomatic and legal communities, which fear corrosion of Hong Kong’s legal autonomy and the difficulty of ensuring basic judicial protections in mainland China.

Organisers put the size of the crowd at more than a million, outstripping a demonstration in 2003 when 500,000 took to the streets to challenge government plans for tighter national security laws.

Many thousands were still waiting to join the march from Victoria Park on Hong Kong island on Sunday as tens of thousands of others reached the Legislative Council building in the Admiralty business district.

Hong Kong Chief Secretary for Administration Matthew Cheung said on Monday the government had improved the entire proposal to show it had been responding to social demands. He said the bill would have a second reading debate on Wednesday.

“I hope that in the Legislative Council, everyone can continue the discussion in a frank, peaceful and rational way and continue to follow up on this matter,” Cheung said.

US and European officials have issued formal warnings, matching international business and human rights lobbies that fear the changes would dent Hong Kong’s rule of law.

The former British colony was handed back to Chinese rule in 1997 amid guarantees of autonomy and various freedoms, including a separate legal system, which many diplomats and business leaders believe is the city’s strongest remaining asset.

All but one protester had been cleared from the area, with residents back to work as normal.

Hong Kong newspaper Mingpao said in an editorial the government should take the protesters seriously and that pushing the legislation forward would exacerbate tensions.

The official China Daily newspaper said in an editorial on Monday “foreign forces” were trying to hurt China by creating chaos in Hong Kong.

“Any fair-minded person would deem the amendment bill a legitimate, sensible and reasonable piece of legislation that would strengthen Hong Kong’s rule of law and deliver justice,” the mainland paper said.

Amnesty International said the amended extradition law was a threat to human rights.

“If enacted, this law would extend the ability of the mainland authorities to target critics, human rights activists, journalists, NGO workers and anyone else in Hong Kong, much in the same way they do at home,” it said in a statement.