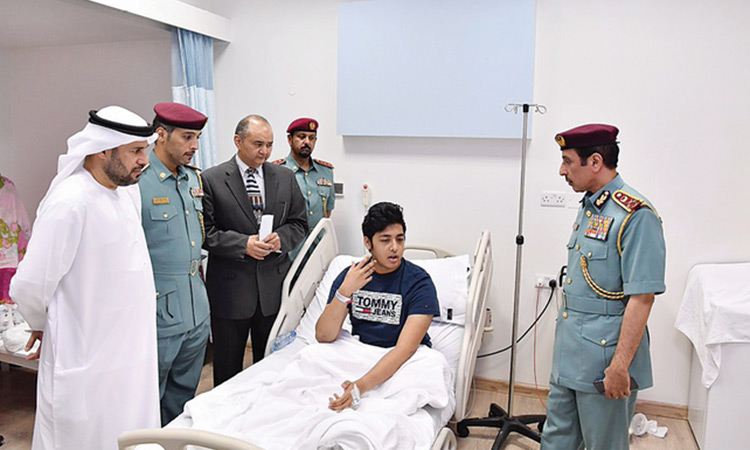 Officials visit victims, who fell ill after drinking contaminated water, at the Thumbay Hospital in Ajman.

Sheikh Ammar Bin Humaid Al Nuaimi, Crown Prince of Ajman and Chairman of the Executive Council, has formed a committee of government departments in Ajman, which include members of the Ajman Police General Headquarters, Municipality and Planning Department, and the Emergency, Crisis and Disaster Management Center in Ajman, in order to follow up on the health situation of those who were injured due to the water contamination incident that took place at a residential complex in Ajman.

The committee was assigned to investigate the incident and complete all procedures of inspection, evaluation and submission of detailed reports within a week, besides setting precautionary measures to ensure that such tragic incidents will not reoccur in the future.

Under the directives of  Sheikh Ammar, the committee will include a subject-matter expert to ensure the initiation of remedial actions, stressing on the importance of providing all means of safety and security for the residents.

Sheikh Ammar also instructed to supply the residents with drinking water for their daily use until the contaminated water is safely purified and returned to the tanks.

Members of the visiting delegation were briefed by the doctors about the patients’ health progress, and about the tests that showed they were in a stable condition, indicating no risks on any of the victims, as well as ensuring their recovery very soon.

Brigadier Sheikh Sultan Al Nuaimi stated that Sheikh Ammar Bin Humaid Al Nuaimi have instructed the establishment of a specialised office in the management of the complex, in order to receive complaints and follow up with the needs of residents directly through police and a team from the Emergency, Crisis and Disaster Management.

Lastly, ambulances were assigned to be available around the clock in the area of the residential complex to easily transport patients to the nearest hospital in case of any emergency.

Over 190 people living in a residential complex in Ajman underwent medical treatment in several hospitals after they suffered from vomiting and diarrhoea on Saturday. The preliminary investigation indicated that there was contamination in the water tank.

According to Engineer Humaid Al Mualla, Acting Director of Health and Safety Department at Ajman Municipality and Planning Department, the department was alerted by one hospital about receiving a number of people suffering from vomiting and diarrhoea. The medical authorities in Ajman reported that 190 cases of victims of gastroenteritis were received by various hospitals. All cases were treated and discharged, except cases of seven people who suffered from high fever, but their condition is stable.

The Health and Safety Department initially revealed a contamination detected in the water tank based on the preliminary laboratory tests. Thus, the necessary actions have been taken in coordination with the towers’ management to determine the incident’s cause. The tanks were emptied, cleaned and sterilised. The water will be returned after ensuring its safety and taking all preventive measures. The results of the laboratory analysis will be announced within this week, Al Mualla said.