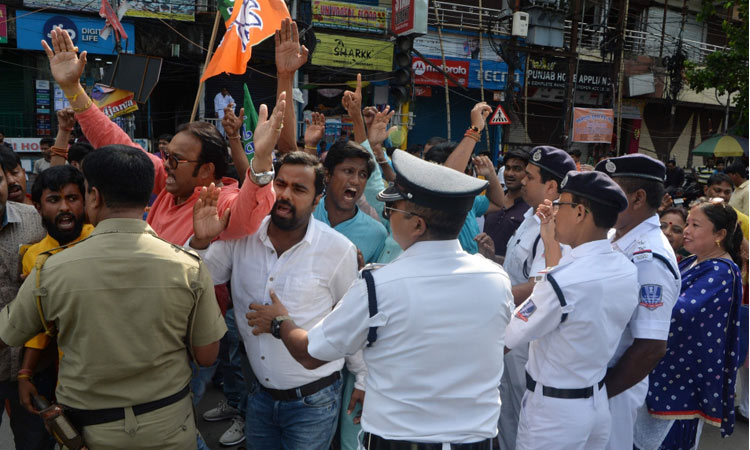 Supporters of BJP shout slogans as they block a road during a protest against the recent killings at Sandeshkhali in West Bengal on Sunday. AFP

A gun battle between supporters of India's ruling right-wing party and a regional rival has killed four people in West Bengal, police said on Sunday, as violence raged in the tinderbox state.

At least 18 others were injured in the clashes that broke out Saturday in the eastern state that has been on edge since Prime Minister Narendra Modi's Bharatiya Janata Party (BJP) launched an aggressive campaign to win parliamentary seats last year.

"Three of the dead were BJP workers while the other was a (regional) Trinamool party supporter," a police official told AFP.

Local BJP leader Mukul Roy tweeted that three BJP workers were shot dead and a Trinamool minister said one of his party members was killed in the fight.

Both the BJP and Trinamool, led by the firebrand Modi critic Mamata Banerjee, accuse each other of killings, intimidation and corruption.

Sandeshkhali, the site of the latest gun battle, remained tense on Sunday with more than 100 police personnel standing guard in the area, witnesses told AFP.

The BJP, which has traditionally held sway in the Hindi-speaking belt in the north, has been trying hard to pick up support in West Bengal where Banerjee's party has dominated for close to a decade.

It won 18 seats in the general election in West Bengal, up from the two that it managed in 2014, en route to its nationwide win. Trinamool won 22 while centre-left opposition party Congress picked up two of the total 42 seats in the state.

Modi's party won a huge 303 seats in the national parliament, increasing its previous tally of 282 seats in 2014.

The clashes in Sandeshkhali broke out over the hoisting of BJP flags and the putting up of posters, said the BJP's general secretary in the state, Sayantan Basu.

"They tried to throw away our party flags and posters and when we protested, our workers were shot from point blank range," Basu was quoted as saying by the Press Trust of India (PTI).

Local minister Jyotipriyo Mullick who belongs to the Trinamool party said one of their supporters was "hacked and shot dead by BJP workers".

State elections in West Bengal are scheduled to be held in 2021 with the BJP expected to give a tough fight again.

The state has witnessed some of the most violent feuds between rival parties.

And last year, a BJP worker was killed and his body was hanged from a tree.

Modi has called the killings "shameful and anti-democratic".

Political killings are rife across India. While National Crime Bureau data said there were more than 100 political murders in 2016, experts say the figure was likely much higher.

Kerala, Uttar Pradesh and Bihar states are the worst for political murders, the government data shows.