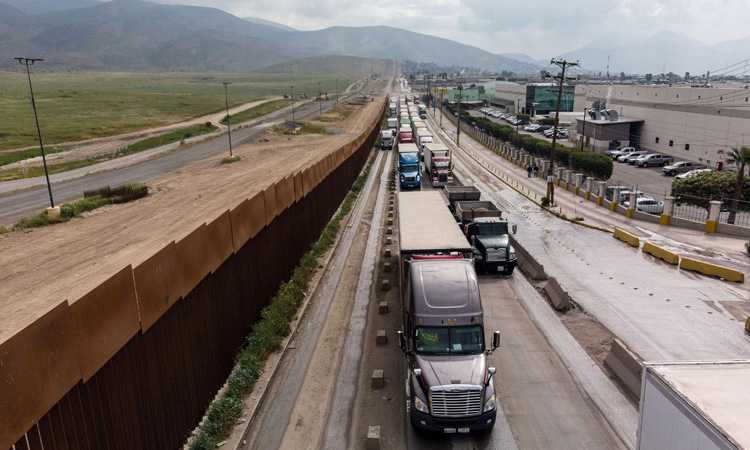 The United States and Mexico reached an 11th-hour deal late on Friday to crack down on migration from Central America, with President Donald Trump relenting on threats to slap potentially devastating tariffs on the neighbouring country.

With Trump ready to impose five per cent tariffs on all Mexican good starting on Monday, senior officials hammered out an agreement after three days of intense negotiations at the State Department.

Under the deal, Mexico acknowledged and agreed to expand its policy of taking back migrants from violence-riven Guatemala, Honduras and El Salvador as the United States processes their asylum claims. 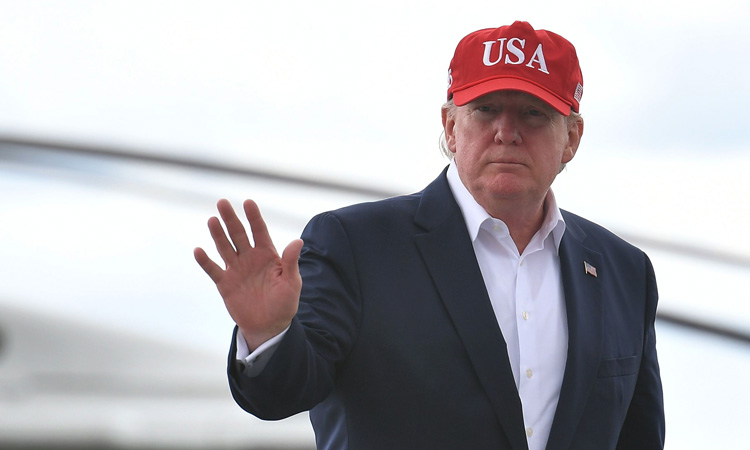 Trump gestures as he makes his way to board Air Force One at Shannon Airport in County Clare, Ireland on Friday. Mandel Ngan/ AFP

In turn, Mexico managed to avoid a proposal it had continually rejected — that it process asylum claims on its own soil before migrants try to reach the United States.

“I am pleased to inform you that The United States of America has reached a signed agreement with Mexico. The Tariffs scheduled to be implemented by the US on Monday, against Mexico, are hereby indefinitely suspended,” Trump wrote on Twitter shortly after returning from a trip to Europe.

“Mexico, in turn, has agreed to take strong measures to stem the tide of Migration through Mexico, and to our Southern Border. This is being done to greatly reduce, or eliminate, Illegal Immigration coming from Mexico and into the United States.”

Mexican President Andres Manuel Lopez Obrador, who had planned to head Saturday to the border city of Tijuana to show solidarity ahead of the tariffs, said that his trip would instead be to “celebrate.”

“Thanks to the support of all Mexicans, we were able to avoid tariffs on Mexican products exported to the United States,” tweeted Lopez Obrador, who since his election last year has tried studiously not to antagonize Trump.

Trump, who ran for president pushing a tough line on immigration that included denouncing undocumented Mexicans as rapists, had vowed to raise tariffs as high as 25 per cent unless Mexico — which exports $350 billion in goods each year to the United States — takes further action against migrants.

The tariffs would have clobbered Mexico’s economy, which is integrated with the United States and Canada under the North American Free Trade Agreement, with experts warning of a recession and Fitch rating service already downgrading Mexico’s credit rating.

Mexican Foreign Minister Marcelo Ebrard, who quickly flew to Washington and had stayed ever since following Trump’s tariff threat by Twitter on May 30, said he believed the two sides had found a compromise.

“I think it was a fair balance, because they have more drastic measures and proposals,” he told reporters as he left the State Department following a final day of talks that lasted 12 hours.

“We have reached some middle point,” he said.

“The Governments of the United States and Mexico will work together to immediately implement a durable solution,” it said.

Mexico will deploy National Guard troops throughout the country, “giving priority to its southern border” with Guatemala. It will also target human smuggling and trafficking groups.

Making official a policy that has triggered opposition in both countries, the United States said it would systematically send back asylum seekers who cross the border, with Mexico offering them jobs, health care and education.

Thousands of asylum seekers have already been sent back to Mexico, prompting criticism from human rights campaigners that the migrants will lack due process and face new danger in border cities such as Ciudad Juarez.

Trump, who has declared a crisis at the border and earlier deployed troops, says that asylum seekers can too easily slip into the population while on US soil.

In a shift from the past when most undocumented immigrants were men seeking work, a majority of recent arrivals are families or unaccompanied children fleeing violence.

The number of migrants detained or blocked at the border surged to 144,000 in May, triple the level a year earlier.

Senator Joni Ernst, who represents the farming state of Iowa and had broken with Trump on the tariffs, said that her state was “breathing a sigh of relief” with the deal.

But Democrats denounced Trump for taking the United States and Mexico to the brink.

“What we see is yet another example of him trying to be both the arsonist who created this problem in the first place and the firefighter who wants credit for addressing it,” said Democratic presidential candidate Beto O’Rourke, who represented the Texas border city of El Paso in Congress.

Chuck Schumer, the top Democrat in the Senate, mocked Trump’s triumphant announcement of a deal to reduce illegal immigration.

“Now that that problem is solved, I’m sure we won’t be hearing any more about it in the future,” Schumer tweeted.

In the joint statement, the United States and Mexico said they would continue discussions and could announce further measures if the plan does not lead to “the expected results.”