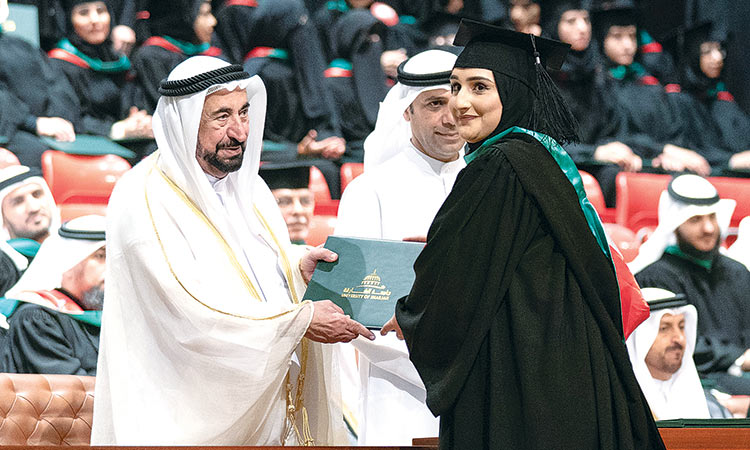 Sheikh Sultan presents a certificate to one of the 249 graduates during the ceremony. WAM

Sheikh Sultan’s remarks came in a speech he delivered on Saturday at the graduation ceremony of 249 students of the university’s higher studies held at the University City Hall in the presence of Sheikh Sultan Bin Mohammed Bin Sultan Al Qasimi, Crown Prince and Deputy Ruler of Sharjah.

Sheikh Sultan congratulated the graduates and said, “We are proud of this cohort and we would like to congratulate you, the students,your families and the governmental and private entities that you come from. We also congratulate ourselves on these fruits of labour that we are harvesting today. We have all the faith in you and we are assured that you will use the knowledge and expertise that you gained during your studies to better serve this nation.”

Highlighting the future plans for UoS, Sheikh Sultan said, “We are happy to announce that the number of approved higher studies will rise as of September to over 50 Masters and PhD programmes in various medical, health, engineering, scientific and humanities disciplines.”

Last Sunday, Sheikh Sultan as President of the American University of Sharjah (AUS) approved a number of decisions related to the development of AUS work mechanism and raising its proficiency, following which His Highness reviewed several AUS financial, academic and research issues.

This came as he chaired a meeting of AUS Board of Trustees, during which Kevin Mitchell has been appointed Chancellor of the ASU after he had been acting Chancellor since March 2019.

During its meeting, the Board adopted the University’s operational budget for the fiscal year 2019-2020 as proposed by the Finance Committee of the Board.

Sheikh Sultan expressed his happiness with the progress of the University and its plans, especially in the field of research. He also thanked the members of the Board of Trustees for their hard work and continuous support.

Professor Kevin Mitchell said, “On behalf of all the members of the American University of Sharjah, I would like to thank His Highness Sheikh Dr. Sultan bin Mohamed Al Qasimi for his guidance and wise leadership that made of the University an exceptional academic institution that attracts the best faculty members thus ensuring graduates’ full preparedness for the future. He also thanked the members of the Board for their hard work and continuous support

The Board also approved bestowing the title of “Honourary Professor” on Dr Yousef Abu Muhanna, and granting four -year renewable term contracts for 19 members of the teaching staff.