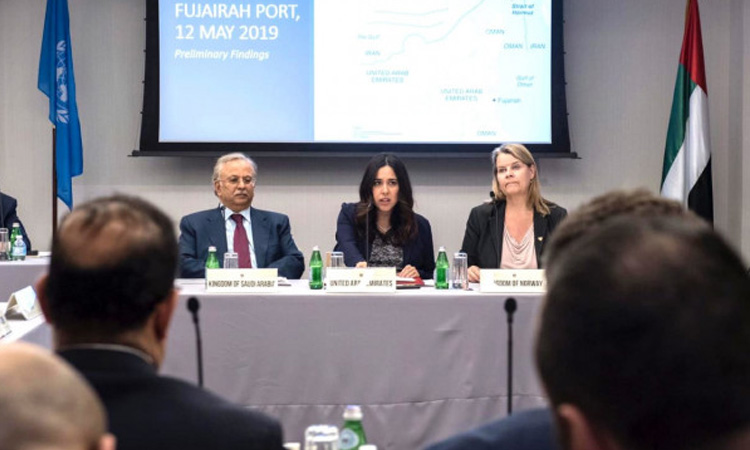 UAE envoy briefs members of the UNSC on the preliminary findings of the investigation into the coordinated attacks on four oil tankers in Fujairah. WAM

The attacks took place within UAE territorial waters less than 12 nautical miles from the UAE coastline, and UAE authorities have taken the lead in the investigation in coordination with several international partners.

The affected states stressed that the attacks endangered international commercial navigation and the security of global energy supplies, and threatened international peace and security. They also thanked Council members who had already rendered support to the investigation into the attacks and invited all members of the Council to review the evidence that has been secured by UAE authorities.

Furthermore, the UAE, Norway, and Saudi Arabia committed to keeping Council members apprised of further findings from the ongoing investigation and requested that the Security Council be seized of the matter.

The assessment of the damage to the four vessels and the chemical analysis of the debris recovered revealed it was highly likely that limpet mines were used in the attacks on the four vessels on 12th May 2019, the statement revealed.

"Based on the evaluation of radar data, and the short time several of the targeted vessels had been at anchor prior to the attacks, it appears most likely that the mines were placed on the vessels by divers deployed from fast boats," it added.

While investigations are still ongoing, the joint statement said that "these facts are strong indications that the four attacks were part of a sophisticated and coordinated operation carried out by an actor with significant operational capacity, most likely a state actor."

It went on to note that the above is supported by the following facts:

— The attacks required intelligence capabilities for the deliberate selection of four oil tankers from among almost 200 vessels of all types that lay at anchor off Fujairah at the time of the attacks. One of the targets was at the opposite end of the anchorage area from the other ships, which indicates that these were premeditated strikes, rather than targets picked at random.

—The attacks likely required the positive identification of these pre-selected targets by the operatives carrying out the attacks.

— The attacks required trained divers; the explosive charges were placed with a high degree of precision under the waterline, in ways that were designed to incapacitate the ships without sinking them or detonating their cargoes - indicating minute knowledge of the design of the targeted ships.

— The attacks required a high degree of coordination among what most likely were several teams of operatives. This included the timed detonation of all four explosive charges, sequenced within less than an hour.

— The attacks required the expert navigation of fast boats, with understanding of the geographic area, that were able to intrude into UAE territorial waters and to exfiltrate the operatives after delivering the explosive charges.

The UAE, Norway, and Saudi Arabia will also share these preliminary findings with the London-based International Maritime Organisation, IMO. The UAE will also inform the organisation and its members of protective measures for the safety and security of maritime shipping.

The Permanent Missions of the United Arab Emirates, the Kingdom of Saudi Arabia, and the Kingdom of Norway sent a joint letter to the United Nations Security Council on Wednesday, drawing attention to an incident in the UAE territorial waters on 12th May 2019, that targeted four tankers - two Saudi-flagged, one Norwegian-flagged, and one Emirati-flagged vessel.