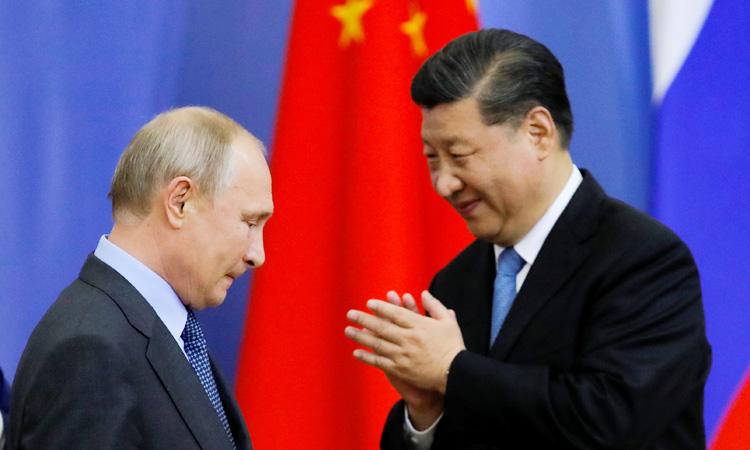 Xi arrived in Moscow on Wednesday for a three-day visit with Vladimir Putin and described the Russian leader as his “best friend” during a cosy meeting at the Kremlin.

To end the trip, Xi and his host will appear at a plenary session of the annual Saint Petersburg Economic Forum, which Moscow hopes will woo foreign investors despite an uncertain business climate.

Xi is set to present China’s ideas on sustainable development and multilateral cooperation, Beijing said ahead of his appearance.

The 2019 forum “will illustrate very clearly just how bi-polar the world has become,” said Chris Weafer, a senior partner at the Macro Advisory consulting firm.

“In the same week that President Trump will be having tea with the Queen in London, President Putin will be hosting President Xi in Saint Petersburg.”

The trip comes five years after Moscow’s annexation of Ukraine’s Crimea peninsula led to a serious rift with the West and a move towards Russia’s neighbour to the east.

Beijing is meanwhile locked in a trade war with the United States.

Moscow and Beijing’s economic ties have grown in recent years, though they remain heavily weighted in favour of China, which dwarfs Russia in economic and demographic terms.

Xi’s visit has already seen the signing of dozens of commercial contracts in e-commerce, telecoms, gas and other areas.

While this is the Chinese leader’s first appearance at the economic forum, where he heads a 1,000-strong delegation, he and Putin have met regularly in recent years.

The partnership is yielding increasing trade, which grew by 25 percent in 2018 to hit a record $108 billion, he said.

But despite political tensions and repeated rounds of sanctions over Moscow’s actions in Ukraine, the European Union remains by far the biggest foreign investor in Russia — well ahead of China and the US.

“China is taking time to ramp up investments in Russia,” said Charles Robertson, chief economist at Renaissance Capital. “It wants to feel secure about the long term, it doesn’t want to rush into it.”

He predicted China would make big investments over the next three to five years, possibly even sooner, as Russia plays an important role in Chinese projects along Beijing’s New Silk Road.

Among major Russian-Chinese collaborations is the Power of Siberia gas pipeline, a joint project between Gazprom and China’s CNPC which is set to deliver Russian gas to China from later this year.

CNPC and the Silk Road Fund also have a 29.9 percent stake in the Yamal LNG liquefied natural gas megaproject run by Russia’s Novatek in Arctic Siberia.

But analysts stress the limits of this alliance.

“Asymmetries are present across the board but are especially visible in the economic field,” according to a report published last month by the Institute for International Political Studies (ISPI) in Milan.

Russia’s GDP is today no bigger than that of China’s Guangdong province, and its defence spending is a third of that of its neighbour.

“It is hard not to see who has the upper hand in this relationship,” the ISPI report said.

The lifeblood of intelligence agencies is threat inflation: exaggerating the gravity of the dangers menacing the public, and calling for harsher laws to cope with them.