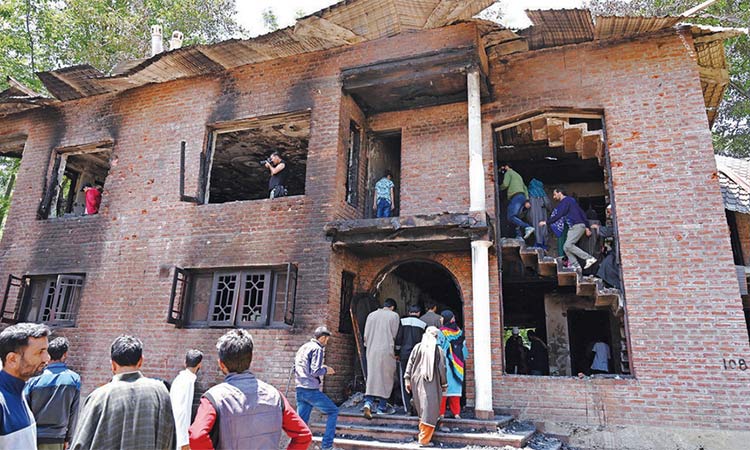 Kashmiri villagers look inside a damaged house following a gunfight between militants and government forces at Panjran village in Pulwama, Srinagar. Agence France-Presse

The former Himalayan kingdom is divided between Pakistan and India. For decades, rebel groups have been fighting for independence from Indian rule or a merger of Kashmir with Pakistan.

The fighting has left tens of thousands dead, mostly civilians.

Soldiers laid siege to a residential area in southern Pulwama district, triggering an exchange of fire with armed militants hiding in a house late Thursday evening.

“One militant was killed in the initial encounter that went on through the night. Three more were killed during early hours today,” a police officer, speaking on condition of anonymity, told AFP on Friday.

An Indian army spokesman, based in the main city of Srinagar, also confirmed four “terrorists” were killed in the fighting.

“Two were local militants from Jaish-e-Mohammad group and the other two were identified as SPOs who had gone missing,” the police officer said, referring to the two Special Police Officers.

The officers had deserted, taking their automatic rifles, a day earlier to join the rebel ranks.

SPOs are the lowest-ranked officers in the state police.

Paid 6,000 rupees ($85) a month, they are mostly deployed for counterinsurgency duties and providing personal security for dignitaries.

Another police officer said the two killed former SPOs had gone for a day of leave to celebrate the Muslim festival of Eid, but did not report back to duty on Thursday morning.

Many SPOs have deserted the police force in the past to join the rebels in the restive region, including three who were deployed to protect a minister in the local government.

Pakistan-based JeM (Jaish-e-Mohammad) and rebel groups have been fighting some 500,000 Indian soldiers deployed in the disputed territory for decades. Rivals India and Pakistan have separately administered Kashmir since the end of British colonial rule and Partition of the subcontinent in 1947.

The nuclear-armed South Asian neighbours both claim the entire region in full.

Gun battles between anti-India rebels and government forces are frequent in parts of the territory controlled by New Delhi.

This year more than 100 militants have been killed so far and fighters rarely last a few months after joining militant groups.

In recent years New Delhi has repeatedly said soldiers have a free hand in wiping out militancy from Kashmir, but new rebels have been joining in the fight almost as fast as they are killed by Indian forces.

Pakistan says it only provides moral and diplomatic support to a Kashmiri struggle for the right to self-determination.

Three militants have been killed in an overnight gunfight between security forces and holed up militants in Jammu and Kashmir’s Pulwama district, police sources said.

While one of the militants was killed on Thursday, two others were brought down after the encounter resumed at dawn. Their bodies along with a large cache of weapons were recovered on Friday from the encounter site in Panjran village of Lassipora area.

Exact identities and group affiliations of the slain militants were being ascertained, the sources said adding that searches were still underway.

The operation was launched on Thursday on specific information about the presence of a group of militants hiding in Panjran village.

As the cordon around the hiding militants was tightened, they had fired starting the encounter.

As a precautionary measure mobile Internet services in Pulwama district was suspended.

Commando sepoy Karamjeet Singh of 23 Para regiment shot himself with his service rifle in Mastpora village in the morning, police said.

“He was taken to a hospital where he was declared dead on arrival. A case has been registered and investigations are underway.” Meanwhile, a speeding car has mowed down 25 sheep owned by a nomadic shepherd in Jammu and Kashmir’s Srinagar, police said on Friday.