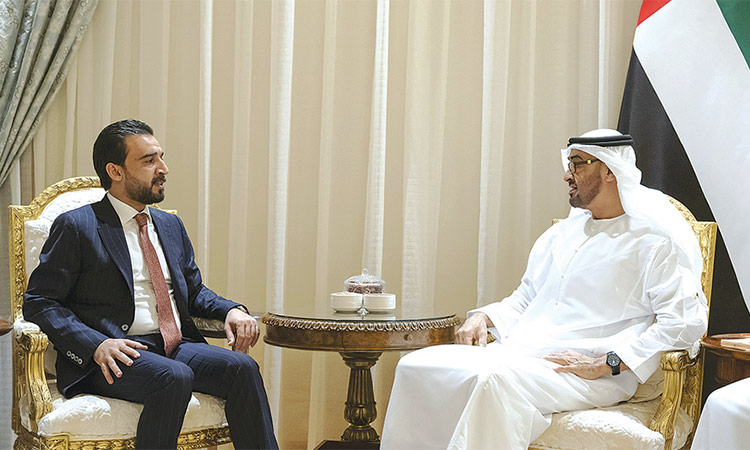 During the meeting, the two sides explored current ties between the two countries and means to advance them across various sectors, particularly in parliamentary cooperation. Sheikh Mohamed and Al Halbousi highlighted the importance of parliamentary diplomacy in furthering relations between the UAE and Iraq, but also supporting efforts to gain regional stability.

The latest regional and international developments were reviewed by the two leaders during the phone conversation, which also occasioned an exchange of views over issues of mutual concern.

They underlined their keenness to continue to advance bilateral relations to higher levels and to jointly work for establishing peace and security and promoting the values of tolerance and peaceful co-existence, being a solid basis for global stability and prosperity.

Recently, Sheikh Mohamed as Chairman of the Executive Council of the Emirate of Abu Dhabi had ordered the distribution of the first instalment for 2019 of housing loans, government houses and residential plots, which included 2,000 loans with a total value of Dhs3.4 billion.

The instalment also comes in line with the directives of Sheikh Mohamed Bin Zayed as part of the Abu Dhabi Government Accelerators Programme “Ghadan 21,” to double the number of loans granted annually.

In 2018, a total of 12,100 residential loans were granted per a housing loan distribution plan which also saw the approval of loan requests from previous years that have met all the requirements.

Under the directives of Sheikh Mohamed, the council also issued issued resolution No.127 for 2019, reducing municipal fees for Musataha agreements in Abu Dhabi by amending resolution No.49 for 2018 about the same.

The new resolution, which is effective immediately, comes to further facilitate and promote investments and limit the cost of developing projects.

At the end of last year, Sheikh Mohamed had instructed the Executive Committee, an affiliation to the Executive Council, and chaired by Sheikh Khalid Bin Mohamed Bin Zayed Al Nahyan, to re-examine the terms of Musataha agreements for all projects within Abu Dhabi.

According to the new resolution, the fees for registering Musataha agreements will be reduced from 4 per cent of the returns value, to 1 or 2 per cent, or exempted fully, depending on land location and usage classification.

Registration fees vary depending on the classification of the location of plots (prime vs. developing), and usage classification such as commercial, leisure, general area, agricultural, industrial, and so forth.

The new resolution also stipulates a fee cap for projects in the services, educational, healthcare and industrial sectors, to increase investors’ appetite and act as a catalyst for new projects.