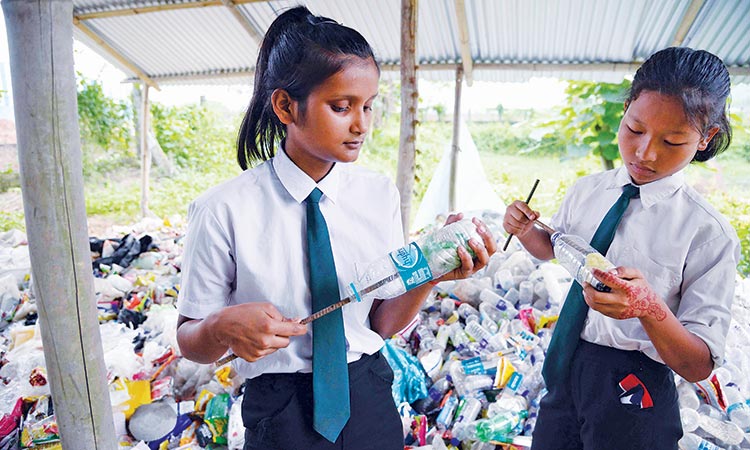 Students put plastic bags inside plastic bottles to make eco-bricks in Pamohi on the outskirts of Guwahati. Agence France-Presse

India has repeatedly failed to address environmental concerns. Last year a UN report found 14 of the world’s 15 most polluted cities were Indian.

And despite calls to action against pollution around the globe, Indian politicians mostly side-stepped the issue in the last election.

The State of India’s Environment (SoE) Report found air pollution is responsible for 12.5 per cent of all deaths in the country — painting a bleak picture of the environmental record of recent Indian governments.

Carried out by the Centre for Science and Environment (CSE), the report also found 86 per cent of Indian water bodies were “critically polluted.” It added the country’s progress in renewable energy was “dismal.” As of last month India had 280,000 electric vehicles, a fraction of the target of 15-16 million by 2020.

India’s Greenhouse gas emissions rose more than 20 per cent between 2010 and 2014, while its natural gas and hydroelectric plants were in a “shambles”, it continued. The report found gas-based power plants are running at 24 per cent of their capacity, and hydropower projects are running at just 19 per cent.

“The country’s progress in renewable energy in 2018-19 has also been dismal,” the CSE said.

India is projected to add 416 million town and city dwellers to the world’s urban population by 2050. But Prime Minister Narendra Modi, recently re-elected in a campaign in which climate change was barely mentioned, instead tweeted appealing to people to “live in harmony with nature” on World Environment Day.

“We have been brought up in a tradition, where nature is equal to God. Where sanctity of nature is meaningful and where nature’s protection has been put at par with humans,” Modi said.

“On this Environment Day we all need to spare some time to think what can we do to make our planet clean and green,” he said.

It’s a market-based system where the government sets a limit on emissions and allows industries to buy and sell permits to stay below the cap.

The pilot programme launched on World Environment Day will be a model for the rest of India and the world as a means of reducing air pollution and facilitating robust economic growth.

It’s being launched in Surat, a densely-populated industrial centre where textile and dye mills release a significant amount of air pollutant, and is expected to drastically reduce air pollution at a low cost to both government and industry and provide best practices for replicating trading schemes to other emissions, an expert associated with the project told IANS.

The Gujarat pollution Control Board (GPCB) is carrying out the emissions trading programme with the help of a team of researchers, including Michael Greenstone and Anant Sudarshan from the Energy Policy Institute at the University of Chicago (EPIC).

The other researchers are Rohini Pande from the Evidence for Policy Design at Harvard Kennedy School, Nicholas Ryan from the Economic Growth Center at Yale University and from The Abdul Latif Jameel Poverty Action Lab (J-PAL).

The researchers are evaluating the programme’s benefits and costs, relative to the status quo, using a randomised controlled trial.