Merkel vows to carry on despite setback - GulfToday 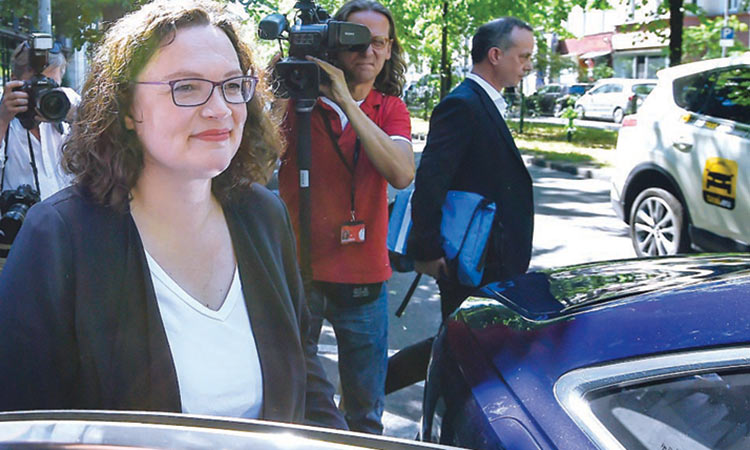 Andrea Nahles leaves after addressing the media at the party’s headquarters in Berlin on Monday. Agence France-Presse

The 48-year-old’s decision left the SPD in disarray, and raised questions over the survival of Merkel’s coalition.

Whether the unhappy partnership between Merkel’s centre-right CDU-CSU alliance and the centre-left SPD can go on until the end of its term in 2021 could now hinge on Nahles’ successor.

Anxious to calm the jitters over her government, Merkel said on Sunday that it will push on and fulfill its mandate.

“What I want to say for the government is that we will continue with our work with all seriousness and with great responsibility,” the veteran leader said in a statement to the press.

The leadership crisis at the SPD could not have come at a worst time for Merkel’s CDU, which was itself struggling to halt a haemorrhage of voters as the younger generation ditched it in droves for the Greens.

Voices are growing louder within the coalition for the parties to part ways.

Harald Christ, deputy chief of the SPD’s economy forum, warned that “Nahles stands for the existence of the GroKo − whose stability is now in question.” “In my view what comes next is the end of the GroKo − everything else leads nowhere,” he told Bild daily.

The deputy leader of the CDU-CSU alliance, Carsten Linnemann also warned in an interview with RedaktionsNetzwerk Deutschland that “if we are unable to progress with the SPD, then we should draw a line under this and ask ourselves if continuing with the GroKo still makes sense.”

The alliance between Merkel’s Christian Democrats and the SPD was fragile from the start.

Wounded by an election rout in 2017, the SPD had initially sought to go into opposition, but was reluctantly coaxed into renewing a partnership with Merkel.

Many within the party however remained wary of continuing to govern in Merkel’s shadow, and the coalition has lurched from crisis to crisis.