Kushner suggests Palestinians not ready to govern themselves - GulfToday 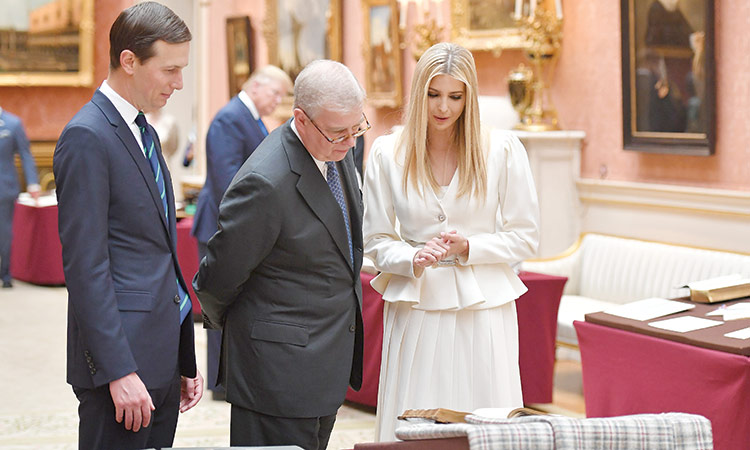 Speaking to US news site Axios, Kushner also said he was not concerned over whether the Palestinians do not trust him since they will base their decisions on whether the plan will improve their lives.

“The hope is, is that over time, they can become capable of governing,” Kushner said when asked if he believes the Palestinians can govern themselves without Israeli interference.

According to excerpts from the interview published late on Sunday on the Axios website, Kushner said the Palestinians “need to have a fair judicial system... freedom of press, freedom of expression, tolerance for all religions” before the Palestinian territories can become “investable.”

Kushner told Axios that the Palestinians “should have self-determination,” without saying whether that would mean an independent state or some lesser form of autonomy.

He has previously hinted that the plan will not endorse creating a Palestinian state.

In the Axios interview, Kushner said “I think that it’s a high bar” when asked if the Palestinians could expect freedom from any Israeli governmental or military interference.

“If you don’t have a proper government structure and proper security when people are living in fear of terror, that hurts Palestinians,” he said.

The Palestinian leadership has already dismissed the upcoming peace plan, saying Trump’s actions so far have shown him to be blatantly biased in favour of Israel.

Those actions include declaring the disputed city of Jerusalem Israel’s capital, cutting hundreds of millions of dollars in Palestinian aid and closing the Palestinians’ de facto embassy in Washington.

“I’m not here to be trusted,” Kushner told Axios, adding he differentiates between the Palestinians and their leaders.

He said he believes the Palestinian people will look at “the facts and then make a determination: Do they think this will allow them to have a pathway to a better life or not?”

The interview was recorded before Kushner’s visit to Jerusalem last week, a trip that also included stops in Morocco and Jordan.

Israel will go to the polls again on Sept.17 after Prime Minister Benjamin Netanyahu failed to form a governing coalition, and such a plan is considered too sensitive by many analysts to introduce during an electoral campaign.

Meanwhile, Trump, voicing impatience with close ally Israel, said he was not happy about electoral upheaval there and urged the Israelis to “get their act together.”

Trump is expected to keep up his support for Prime Minister Benjamin Netanyahu, a right-wing leader who has forged close ties with the US president over their tough stances on the Palestinians and Israel’s arch-foe Iran.

The need to go to the polls again so soon after a closely contested April 9 election in which Netanyahu had claimed victory showed a new weakness in a leader who has been in power for the past decade. “Israel is all messed up in their election,” Trump told reporters at the White House before leaving on a European trip. “They have to get their act together.”

“Bibi got elected and now they have to go through the process again? We’re not happy about that,” Trump said.

Egyptian President Abdel Fattah Al Sisi, speaking about the unannounced US Mideast peace plan, said that his country would not accept anything undesired by the Palestinians.

Speaking after breaking the Ramadan fast at a hotel in Cairo, Sisi also appeared to dismiss suggestions that Egypt might make concessions as part of the US plan.

Referring to the US plan, Sisi said that “Egypt will not accept anything that the Palestinians do not want.”

“You are asking what’s the story and what does Sisi have in mind, and will he give up anything to anyone,” apparently referring to reports that Egypt could be required to allow areas in Sinai adjacent to the Gaza border to be part of the deal.