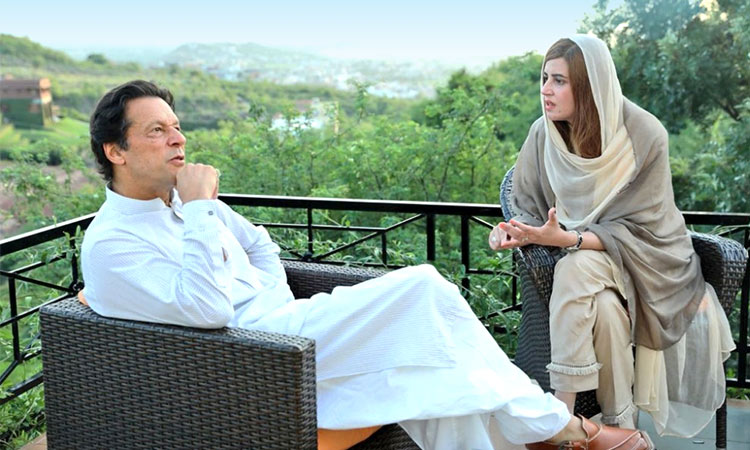 Prime Minister Imran Khan has taken notice of the letter written by Minister of State for Climate Change Zartaj Gul to National Counter-Terrorism Authority (Nacta) regarding the appointment of her sister.

Special assistant to the prime minister, Naeemul Haque, tweeted that Imran has directed Zartaj Gul to withdraw a letter she wrote to Nacta.

"This was against the ethics of PTI, which has always opposed nepotism. No one in the PTI government can promote their relatives/friends by using their positions," Haque said.

Zartaj Gul has got her sister inducted in the important department using her official influence.

She made an official written request to Interior Secretary Interior Azam Suleman to appoint her sister Shabnam Gul in the National Counter Terrorism Authority.

Zartaj Gul’s Principal Staff Officer Sami-ul Haq wrote the letter to Azam on Feb.27, 2019 in which he said he was directed to refer to his telephonic conversation with Zartaj Gul regarding the appointment of Ms Shabnam Gul in Nacta. The CV of Shabnam Gul is attached herewith for further necessary action please.

Following the written request of Zartaj Gul, the interior ministry appointed Shabnam Gul as Director (grade-19) in Nacta on May 22, 2019. Shabnam Gul has zero practical experience in the field of counterterrorism. However, she was given a prized slot in the most sensitive department of the country.

"Pakistan is facing terrorism for the last two decades and Nacta is the premier anti-terror watchdog of the country. However, nepotism in this department raises serious questions on the capacity and capabilities of Nacta. This will not only ruin the reputation of the anti-terror watchdog but will also affect the performance of the department if it continued appointing people with zero experience in this field to the top posts,” said an official.

Shabnam Gul, who is an Assistant Professor in Lahore College Women University (LCWU), is a PhD student and despite passage of almost nine years she has failed to complete her PhD dissertation. Recently, she has been given extension for the third time to complete her thesis. The only experience Shabnam Gul has in the field of counterterrorism is her PhD thesis which is related to terrorism in Pakistan. However, despite passage of almost nine years she could not complete her thesis. Other than this she neither has any practical experience nor even a single research paper in this field, yet she was appointed to the top slot of such a sensitive department.

Shabnam Gul who is currently in charge of International Relations Department, LCWU and got admission in PhD in the Political Science Department of the same university in 2010. She availed herself of study leave for four years from 2014-2018 and extended her leave for almost six months.

The official said that she is bound to serve the LCWU for five years after completion of her PhD degree, as she has signed a legal bond with the university under the HEC rules. However, she has already violated the bond by not completing her PhD despite passage of over eight years.