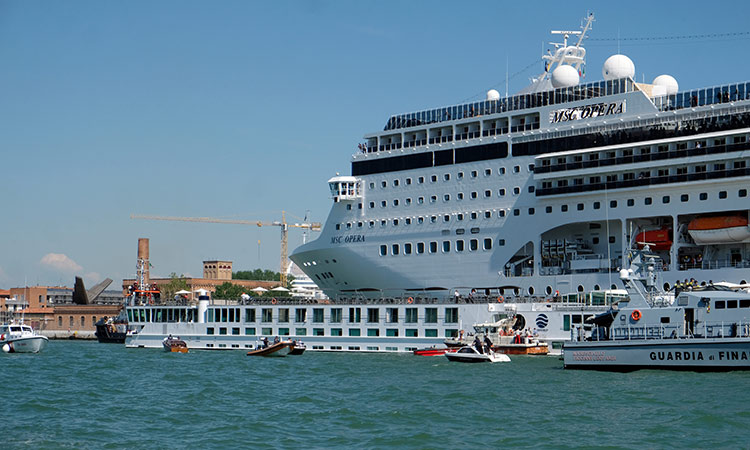 The MSC Cruise ship Opera is seen after the collision with a tourist boat in Venice on Sunday. Manuel Silvestri / Reuters

A massive cruise ship lost control as it docked in Venice on Sunday, crashing into the wharf and hitting a tourist boat after suffering an engine failure.

Tourists on land could be seen running away as the 13-deck MSC Opera scraped along the dockside, its engine blaring, before knocking into a tourist boat, amateur video footage posted on Twitter showed.

The four, who were taken to hospital for check-ups, were on board the River Countess tourist boat.

The Opera, which suffered mechanical trouble before in 2011 during a Baltic cruise, can carry more than 2,500 passengers and boasts a theatre, ballroom and water park for children.

"The MSC ship had an engine failure, which was immediately reported by the captain," Davide Calderan, head of a tugboat company involved in accompanying the ship into its berth, told Italian media.

"The engine was blocked, but with its thrust on, because the speed was increasing," he said.

The two tug boats that had been guiding the ship into the Giudecca tried to slow it, but one of the chains linking them to the giant snapped under the pressure, he added.

The accident reignited a heated row in the Serenissima over the damage caused to the city and its fragile ecosystem by cruise ships that sail exceptionally close to the shore.

While gondoliers in striped T-shirts and woven straw hats row tourists around the narrow canals, the smoking chimneys of mammoth ships loom into sight behind the city's picturesque bell towers and bridges.

Critics say the waves the ships create are eroding the foundations of the lagoon city, which regularly floods, leaving iconic sites such as Saint Mark's Square underwater.

"What happened in the port of Venice is confirmation of what we have been saying for some time," Italy's environment minister Sergio Costa wrote on Twitter.

"Cruise ships must not sail down the Giudecca. We have been working on moving them for months now... and are nearing a solution," he said.

Venice's port authority said it was was working to resolve the accident and free up the blocked canal in the north Italian city.

"In addition to protecting the Unesco heritage city, we have to safeguard the environment, and the safety of citizens and tourists," Culture Minister Alberto Bonisoli said.

Nicola Fratoianni, an MP with the Italian Left party, noted Italy's open-armed attitude to cruise ships contrasted sharply with its hostile approach to charity rescue vessels that help migrants who run into difficulty in the Mediterranean.

"It is truly curious that a country that tries to stop ships that have saved people at sea from entering its ports allows giant steel monsters to risk carnage in Venice," he said.

MSC Cruises, founded in Italy in 1960, is a global line registered in Switzerland and based in Geneva.

The Opera, built 15 years ago, suffered a power failure in 2011 in the Baltic, forcing some 2,000 people to be disembarked in Stockholm rather than continuing their Southampton to Saint Petersburg voyage. 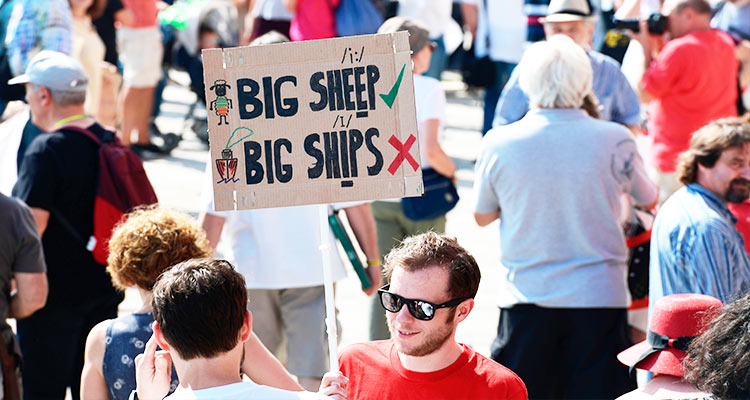 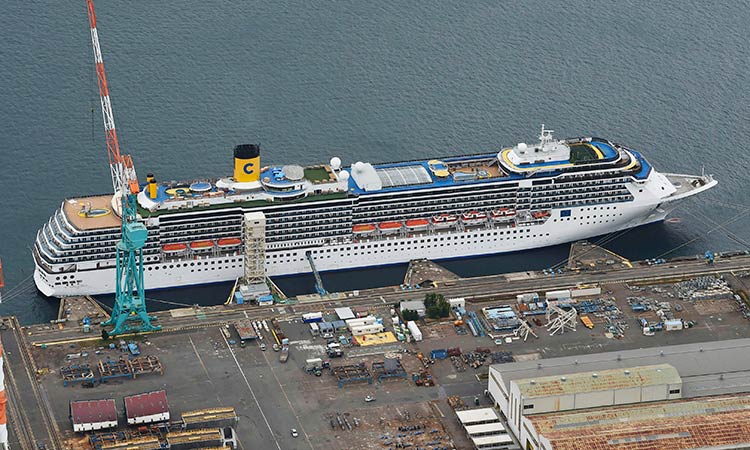 Results on Thursday showed 14 more aboard, all either cooks or those serving food, were infected with the virus, an official in Nagasaki prefecture said. One patient who had been taken to hospital previously was now in serious condition and on a ventilator, he told a live-streamed news conference.