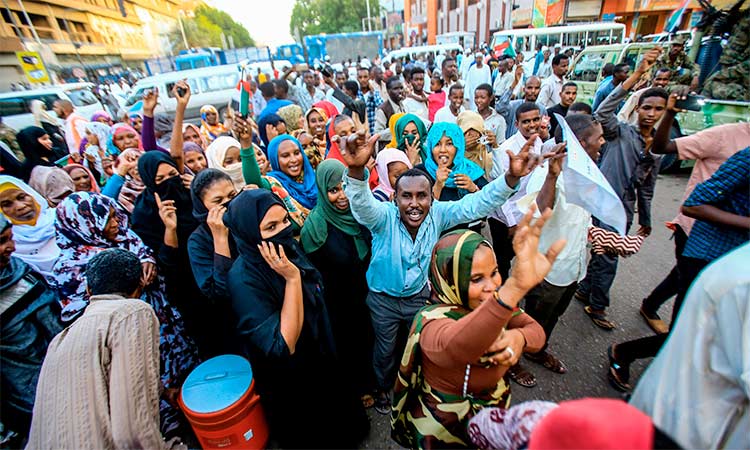 Supporters of the ruling Transitional Military Council demonstrate during a rally in Khartoum on Friday. Agence France-Presse

UN Secretary-General Antonio Guterres on Friday called on Sudan’s military rulers and protest groups to go back to the negotiating table and quickly reach a deal on handing over power to a civilian-led government.

Guterres said in a statement that the sides must “conclude the negotiations over the transfer of power to a civilian-led transitional authority as soon as possible.” Negotiations between protesters and the military council have broken down over whether a planned transitional body would be headed by a civilian or a military figure.

The deadlock has raised fears that the military will seek to tighten its grip on power, crushing hopes of a democratic process in Sudan.

On Friday, hundreds of people rallied in support of Sudan’s military rulers in Khartoum.

The military council has ruled the country since the ouster of president Omar al-Bashir on April 11, after months of protests against his authoritarian rule.

Guterres called for the “utmost restraint” and stressed the importance of upholding human rights, including the right to freedom of assembly and of expression.

Sudanese authorities on Thursday shut down the Khartoum office of Qatari-owned Al Jazeera television and banned its journalists from reporting in the country.

Sudan’s generals, backed by key Arab powers, have resisted calls from African and Western governments to hand over the reins of power.

On May 14, the protest leaders and the military reached a breakthrough by agreeing on a three-year transition period for transferring power to a civilian administration.

They also agreed that parliament be composed of 300 members for the transition, with around two-thirds from the protest alliance and the rest drawn from other political groups.

But negotiations were suspended the following day by the military, which demanded that demonstrators remove roadblocks following clashes in which five people were killed.

Talks resumed on May 19 but broke down the following day over disagreement on whether the military or a civilian should lead the transitional authority.

The UN chief has called for a transition in Sudan that meets the “democratic aspiration” of the Sudanese people.

Meanwhile, in a separate development Sudan’s ambassador to Qatar has returned to Khartoum for consultations, the foreign ministry said on Saturday, with the envoy set to fly back to Doha soon.

The diplomat was summoned “to Khartoum for consultations and...will leave to Doha in the coming hours” to resume his work, Sudan’s ministry said.

Earlier in the day, a spokesperson for Qatar’s foreign ministry denied claims on social media the ambassador had been recalled and said it received official notification only that he was on “short leave.”

Sudan’s decision to summon its ambassador came after the country abruptly shut down the office of Qatari broadcaster Al Jazeera on Thursday without giving a reason.

The news channel, which regularly broadcasts footage of demonstrations that have taken place in Sudan since December, is funded by Doha, a close ally of former president Omar Al Bashir.

Thousands of protesters have remained camped out in front of the army headquarters in Khartoum to pressure the military to cede power.

However, on Friday hundreds of people rallied in support of  military rulers in the capital Khartoum, carrying posters of the generals while some chanted religious slogans.

“One hundred per cent military (rule),” shouted the crowds, the majority young men, as they gathered in central Khartoum.

Some of the demonstrators carried placards with pictures of the military council’s chief, General Abdel Fattah Al Burhan, and his deputy Mohamed Hamdan Dagalo.

The council has ruled the country since the ouster of president Omar al-Bashir on April 11, after months of protests against his authoritarian rule.

Negotiations between protesters who demonstrated against Bashir’s rule and the military have broken down over whether a planned transitional body would be headed by a civilian or a military figure.