Rahul urges his MPs to be more aggressive - GulfToday 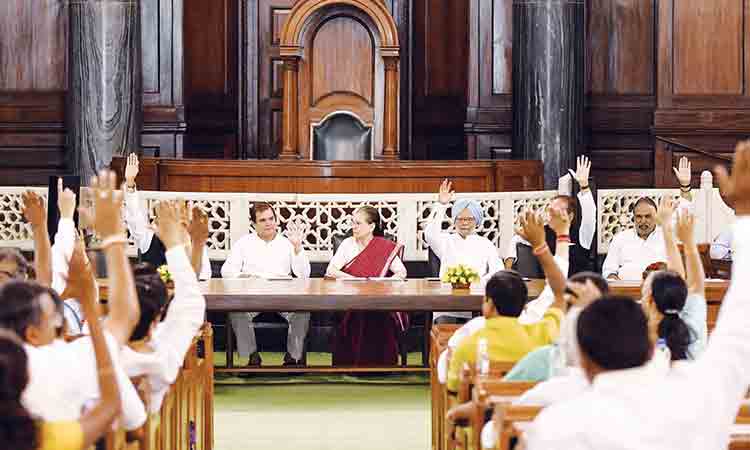 Congress president Rahul Gandhi, despite staying firm on quitting, told the party’s members of parliament on Saturday that the Congress will fight the Bharatiya Janata Party (BJP) every day. At a short meeting, the parliamentarians elected his mother Sonia Gandhi as their chairperson and authorised her to pick the party’s leader in the Lok Sabha as also the Chief Whip.

Rahul cheered his mother’s election, and said, “Under her leadership, the Congress will prove to be a strong and effective opposition party, that will fight to defend the Constitution of India.”

Sonia, in her speech, lauded the role of Rahul Gandhi during the Lok Sabha polls. Rahul led the “party from the front with dynamism”, she said, adding that the party with its 52 MPs in Lok Sabha will play the role of the Opposition sincerely and raise people’s issues.

Sonia thanked her son for “toiling night and day and taking on the Modi government... raising concerns about all sections of society and helped the party win in Madhya Pradesh and Chhattisgarh and Rajasthan.” “As we speak, emotional messages are coming for his continuation (as the party chief). The Congress Working Committee met to deliberate the issue and must take steps,” she added.

In his address, Rahul said the party still has 52 lawmakers in parliament and “will fight the BJP every day.” “When we had 45 members last time, I felt it is going to be really a tough job. I felt that the BJP has 282, we are 45... within a couple of weeks I realised that 45 Congress members are enough to take on 282 BJP members,” he said.

“You fought every single one of those institutions and you forced your way into the Lok Sabha. And that is something you should be extremely proud of,” he said.

“The people who are opposing us in the Parliament, they use hatred.

They use anger to fight us. And as I said throughout the election, there is only one way to fight hatred and anger. There is no other way and that is the love and the affection and the compassion of the Congress party.

“That is why the BJP sits and says that we want Congress-Mukt Bharat because without Congress they have a free run and no one to counter them. There is no opposition against the BJP other than the love and the compassion, the affection of the Congress party. Every single one of you...you are going to enjoy yourself, you are going to shout little more than usual. You are going to have to be little more aggressive.

“Last time if the Speaker used to give us five minutes, this time it may be two minutes. But in those two minutes, we will put forth what the Congress party believes, we will put forth our defence of the Constitution.” Rahul said that Congress’ 52 MPs are “going to fight the BJP every single inch, without giving this much and that applies to the Members from Rajya Sabha as well.” Sonia has a challenge finding a new leader in the Lok Sabha as Rahul is not ready for that. Party veteran Mallikarjun Kharge held the post in the Lok Sabha, but has lost the election this time in Karnataka’s Gulbarga.

At the regular party briefing, Congress Communications In-charge Randeep Singh Surjewala reaffirmed that Rahul Gandhi is the party chief and there were no two opinions or doubts on this.

“I would request all the naysayers to hold their breath. The Congress Working Committee has authorised Rahul Gandhi to do a complete overhaul of the organisation from top to bottom... I would request all my friends in the media whom we respect so much to wait for a while rather than fall prey to speculation,” he said.