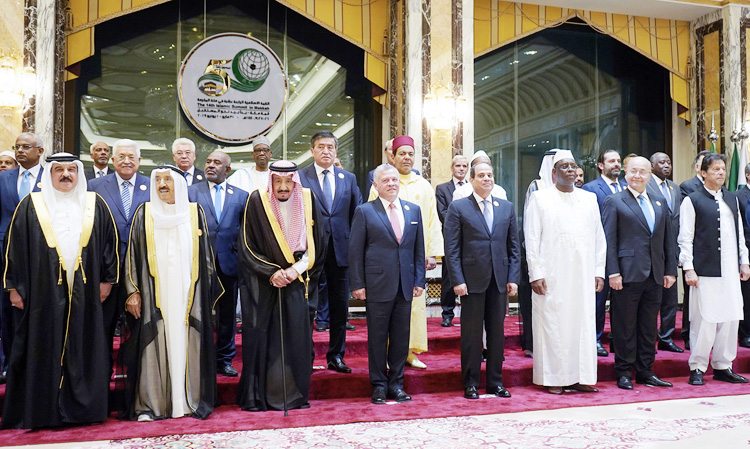 The OIC leaders during a summit meeting of the 57-member Organization of Islamic Cooperation in Makkah.

This came in the final communique released by the 14th regular session of the “Hand in Hand toward the Future” Summit, which concluded in Makkah early on Saturday under the chairmanship of the Custodian of the Two Holy Mosques King Salman Bin Abdulaziz Al Saud, and in the presence of the leaders of the OIC Member States.

The communique strongly condemned the acts of sabotage against four commercial vessels in the UAE’s regional waters as a criminal act threatening the security and safety of marine navigation, calling upon the international community to shoulder its responsibility toward international trade and regional stability. 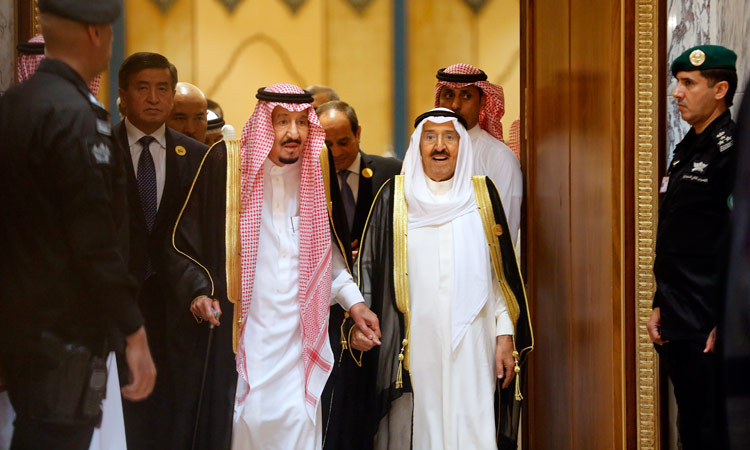 The communique reaffirmed the centrality of the question of Palestine and the issue of Jerusalem to the Islamic nation and reiterated the OIC’s “principled and continuous support at all levels for the Palestinian people to attain their inalienable national rights, including their right to self-determination and the establishment of an independent and sovereign Palestinian State on the 1967 borders with Jerusalem as its capital, and stressed the need to protect the right of return for refugees under resolution 194 and to face any denial of these rights with full force.”

The document also condemned and rejected any positions issued by international bodies or countries which supports the “prolongation of the occupation and expansionist settlement project at the expense of the legitimate national rights of the Palestinian people, including the recognition by the US administration of Jerusalem as the capital of Israel.”

The statement also rejected and condemned in the “strongest terms of any illegal and irresponsible decision recognising Jerusalem as the alleged capital of Israel,” adding that any countries decision to recognise Jerusalem as the capital of Israel would be considered “null and void and constitutes an attack on the historical, legal and national rights of the Palestinian people and the Islamic world.”

Saudi Arabia's King Salman Bin Abdulaziz is seen during the 14th Islamic summit of the OIC in Makkah. Reuters

Saudi Crown Prince Mohammed Bin Salman is seen ahead of the OIC in Makkah, early on Saturday.

The Islamic Summit also called for the complete withdrawal of Israel from the occupied Syrian Golan Heights and return “to the borders of 4 June 1967, in accordance with Security Council resolutions 242 (1967) and 338 (1973), the Land for Peace legislation, the Madrid Peace Conference and the Arab Peace Initiative adopted by the Arab Summit in Beirut in 2002.”

The Summit also highlighted the ongoing situation in Sudan, expressing its support for the choices and decisions of the Sudanese people regarding their own future.

“The Summit called upon the Sudanese parties to continue constructive dialogue in order to maintain peace and social cohesion in the country in order to realise the aspirations of the Sudanese people for the peaceful transfer of power and achieve stability and sustainable development.”

The issue of Islamophobia was also noted with concern on the final communique.

“In this regard, the Summit encouraged the United Nations and other international and regional organisations to adopt March 15 as the International Day against Islamophobia,” the communique added. 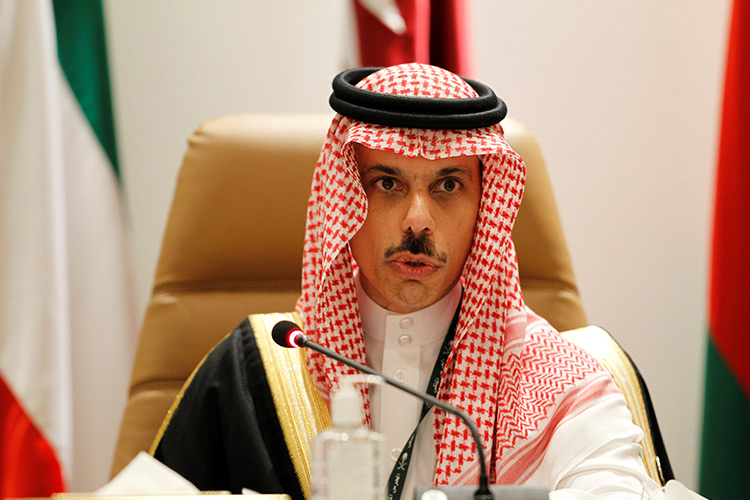 Prince Faisal Bin Farhan Al Saud, addressing a meeting of the Organisation of Islamic Cooperation as hostilities between Israel and Hamas in Gaza entered a seventh day. He condemned what he called the violation of the sanctity of Islamic holy sites.