Trump to hit Mexico with tariffs over ‘illegal migrants’ - GulfToday 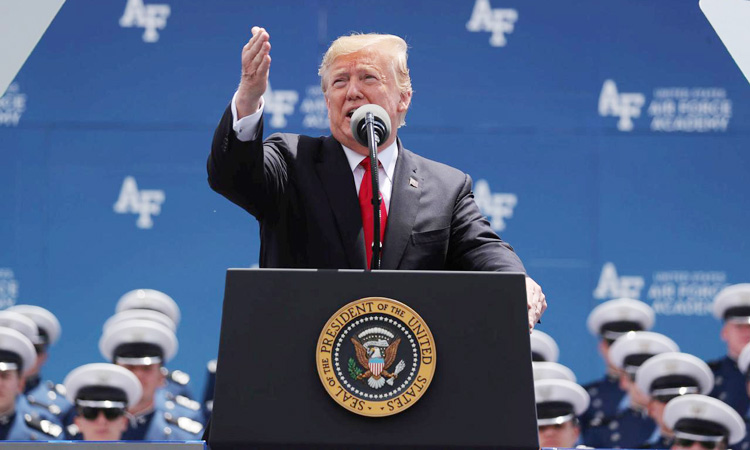 Trump delivers the commencement address at the US Air Force Academy's graduation ceremony in Colorado, Springs, Colorado, US, on Thursday. Reuters

“On June 10th, the United States will impose a 5% Tariff on all goods coming into our Country from Mexico, until such time as illegal migrants coming through Mexico, and into our Country, STOP,” Trump tweeted.

“The Tariff will gradually increase until the Illegal Immigration problem is remedied, at which time the Tariffs will be removed,” he wrote. 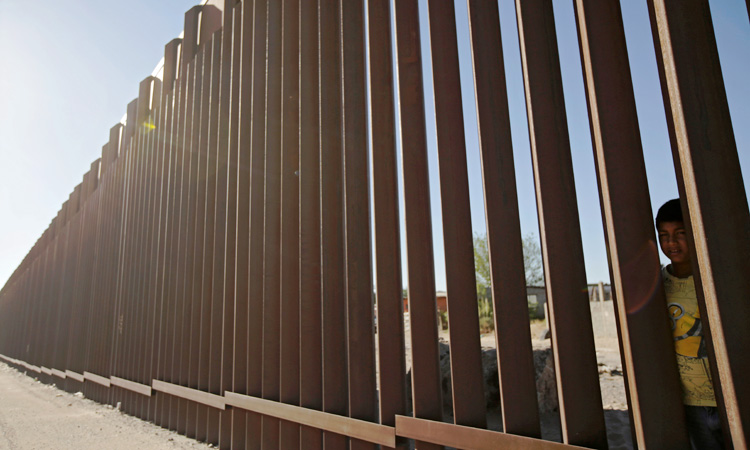 A child looks through the bars of a wall from the side of Ciudad Juarez, Mexico. File photo/Reuters

According to a White House statement, the tariff will rise to 10 per cent on July 1, then increase by five per cent increments each month until topping out at 25 per cent on October 1.

“Tariffs will permanently remain at the 25 per cent level unless and until Mexico substantially stops the illegal inflow of aliens coming through its territory,” the statement said.

“If the illegal migration crisis is alleviated through effective actions taken by Mexico, to be determined in our sole discretion and judgment, the Tariffs will be removed,” it said.

The announcement came the same day that Trump kick-started the process of ratifying the new North American trade pact with Mexico and Canada — an agreement that now may be under threat.

The tariffs would have severe consequences on Mexico, which sends 80 per cent of its exports to the United States.

“I express to you that I don’t want confrontation,” he wrote. “I propose deepening our dialogue, to look for other alternatives to the migration problem.”

Earlier, Mexico’s top diplomat for North America had harsher words on the move, describing it as “disastrous” and vowing to respond “vigorously” if it is implemented.

Trump’s announcement came a day after border agents in El Paso, Texas detained the largest single group of migrants they had ever encountered — 1,036 people.

The group crossed the Rio Grande River from Ciudad Juarez, Mexico, illustrating the mounting problem that Trump’s administration has been unable to get under control.

The El Paso group comprised entire families, 39 single adults and 63 unaccompanied minors, all from Guatemala, Honduras or El Salvador, according to US Customs and Border Protection.

“The apprehension of 1,036 individuals in a single group — the largest group ever encountered by Border Patrol agents — demonstrates the severity of the border security and humanitarian crisis at our Southwest border,” said Customs and Border Protection Deputy Commissioner Robert Perez.

The number of migrants apprehended has topped 100,000 a month in recent months.

They are mostly people fleeing poverty and violence in Central America to ask for asylum once they arrive on US soil.

Trump has consistently demonized the migrants as criminals and gang members, and warned that illegal drugs are flowing across the border.

“Mexico’s passive cooperation in allowing this mass incursion constitutes an emergency and extraordinary threat to the national security and economy of the United States,” the White House said.

“Mexico has very strong immigration laws and could easily halt the illegal flow of migrants, including by returning them to their home countries. Additionally, Mexico could quickly and easily stop illegal aliens from coming through its southern border with Guatemala.”

White House Chief of Staff Mick Mulvaney would not specify what sort of decrease in migrant crossings would lead to the tariffs being lifted, saying only, “We are going to judge success here by the number of people crossing the border and that number needs to start coming down immediately in a significant and substantial number.”

A senior Republican senator said Trump’s move to slap tariffs on Mexico would threaten the US-Mexico-Canada Agreement, an update to the 25-year-old North American Free Trade Agreement, now awaiting ratification by lawmakers in the three countries.

“This is a misuse of presidential tariff authority and counter to congressional intent. Following through on this threat would seriously jeopardize passage of USMCA, a central campaign pledge of President Trump’s and what could be a big victory for the country.”

Trump pledged in his 2016 election campaign to halt illegal immigration, but the numbers of migrants have steadily climbed throughout his 28 months in office.

The CBP said more than 530,000 migrants have been apprehended entering the country since the beginning of the fiscal year in October 2018.

Congress has been unable to pass proposed measures to take action on the immigration issue, and Trump has been stymied by courts on some of the measures his administration has attempted.

Tapping his executive powers against a resistant Congress, Trump has also taken money from the military budget to construct sections of wall along the lengthy frontier, despite his campaign pledge that Mexico would pay for the barrier.