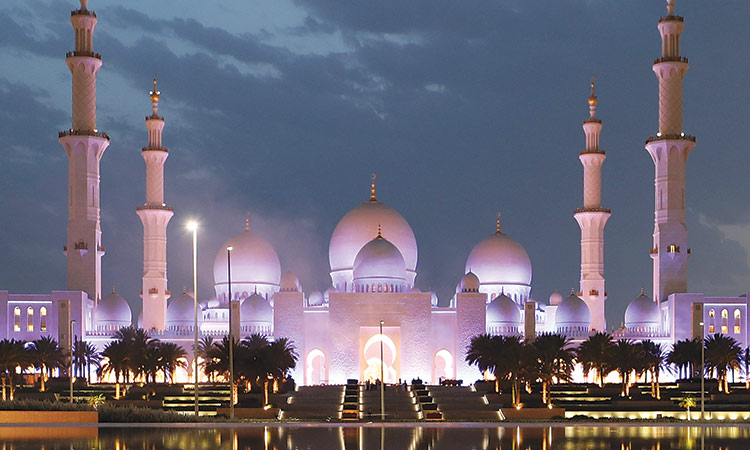 The Sheikh Zayed Grand Mosque Centre achieved remarkable success in the Ramadan Project, which the Centre’s administration paid particular attention to, aiming to achieve highest levels of satisfaction among the mosques guests, of fasting guests, worshipers, and Visitors.

The total number of guests during the first twenty days of Ramadan reached 918,221 guests, of which 180,017 were worshipers, 609,930 were fasting guests and 128,274 were visitors. Masses of diverse cultures and civilizations flocked to the mosque, amidst a series of initiatives and activities aimed to promote noble human values such as coexistence, tolerance, and respect, paint a rosy picture of the Islamic religion, and create a tranquil and calm atmosphere befitting the spirit of the holy month.

The total number of worshipers at the Sheikh Zayed Mosque in Fujairah during the same period reached 56.553 worshipers.

Sheikh Zayed Grand Mosque during the holy month of Ramadan witness a marked increase in the number of guests, especially during the last ten days of the month, and to ensure all its guests receive utmost services, the Center’s management developed well-formulated plans to accommodate the crowds under ideal conditions.

As within the framework of services and initiatives organised and adopted by the Centre, and to enhance social responsibility within the community throughout the holy month, SZGMC collaborated with the Department of Transport in Abu Dhabi, through allocating buses to transport worshipers for Taraweeh prayers during the last 10 days of Ramadan from the additional parking area adjacent to Wahat Al Karama to and from the mosque. In addition, a number of buses are also allocated to transport worshipers from Zayed Sports City, on the 27th night of Ramadan.

The masses of worshipers will be transported back and forth from specific zones with a waiting period of 5 min starting from 11:00 pm, and drop off at 03:00 am.

Other parking zones have also been allocated along Al Jami’ Al Kabeer St. to accommodate a large number of worshipers.

The Center’s administration has further allocated special parking spaces for the buses, in addition to providing additional numbers of electric cars to transport worshipers and facilitate their access to the prayer hall during Tahajjud prayers during the last ten nights of Ramadan.

As a task force made of the Center’s staff and volunteers harnessed their energies to supervise all services offered to ensure the comfort of the worshipers.

These initiatives stem from SZGMCs stern belief in the significance of the integrated collaborative synergy between institutions, in enhancing the value of volunteering within the society, which were established by the nation’s late founding father Sheikh Zayed Bin Sultan Al Nahyan.

The Sheikh Zayed Grand Mosque stands out as one of the world’s largest mosques, and the only one that captures unique interactions between Islam and world cultures. Sheikh Zayed’s vision for the Grand Mosque was to incorporate architectural styles from different Muslim civilizations and celebrate cultural diversity by creating a haven that is truly diverse and inspirational in its foundation.

The mosque’s architects were British, Italian and Emirati, and design inspiration was borrowed parts of Turkey, Morocco, Pakistan, and Egypt among other Islamic countries, revealing a glistening architectural marvel with an astonishing capacity of 40,000 worshippers and visitors.

The open-door policy invites tourists and celebrants from all around the world who can witness the spectacular onion-top domes, the reflective pools that engulf the courtyard and the iconic prayer hall, which not only overflows with blissful sunlight, but also houses the world’s biggest chandelier and carpet, both meticulously handmade. Be sure to spot the calligraphy encircling the hollows of the domes, etched with verses from the Quran and painted with gold leaves in An-Naskh lettering.