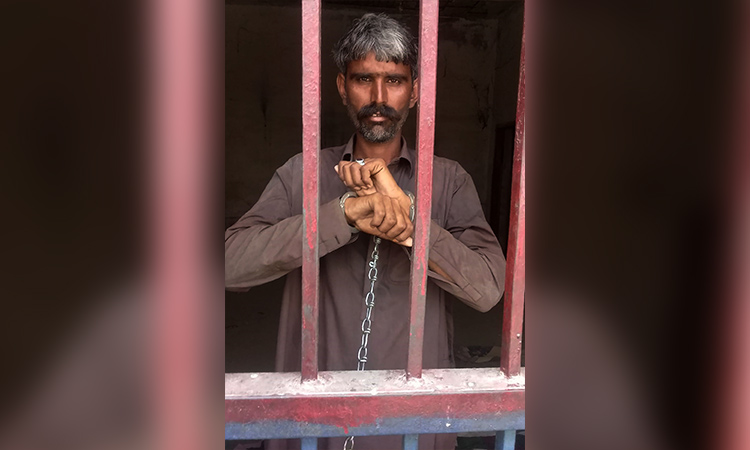 A man, who murdered his HIV positive wife, looks out from a police lockup in Shikarpur district in Sindh. Sindh Police Department / AFP

A Pakistani man killed his HIV positive wife on Wednesday in southern Pakistan, where hundreds of people have tested positive for the virus in recent weeks, stirring panic and casting a light on the country's dismal public health standards.

Police said the murder took place in a village near the epicentre of the outbreak on the outskirts of Larkana city in Pakistan's Sindh province, where thousands have been screened in the last month.

The victim − a 32-year-old mother of four − tested positive in recent days, according to a local police officer, with her husband accusing her of having an extramarital affair.

"This morning the husband strangled (the victim) with a rope and then hung her from a tree outside his home," Roshan Ali − a police officer in Shikarpur − told reporters, adding that the suspect was now in custody.

Shikarpur district police chief Sajid Sadozai confirmed the incident, saying an investigation into the killing was ongoing and the suspect had been booked on murder charges.

Anger and fear continue to swell in the desperately poor villages and suburbs near Larkana affected by the epidemic, which authorities say could be linked to either gross negligence or malicious intent by a local doctor using tainted syringes.

In rural Sindh − long bridled by harsh poverty and illiteracy − access to information about HIV and other diseases has kept the large swathes of the population in the dark about how the virus is transmitted.

Health officials say nearly 700 people, many of them children, have tested positive in recent weeks as experts warn of a surge in infection rates across Pakistan due to the use of unsanitary equipment and rampant malpractice − often at the hands of quack doctors.

Pakistan was long considered a low prevalence country for HIV, but the disease is expanding at an alarming rate − particularly among intravenous drug users and sex workers.

With about 20,000 new HIV infections reported in 2017 alone, Pakistan currently has the second fastest growing HIV rates across Asia, according to the UN.