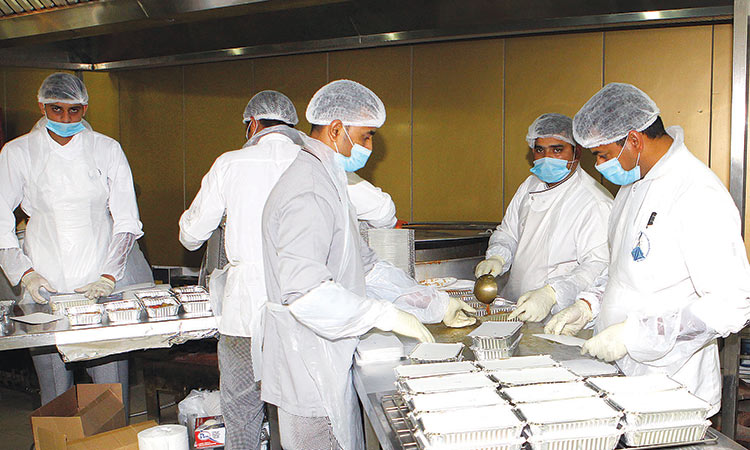 Opened to the public in 2007, the Sheikh Zayed Mosque, the largest mosque in the UAE, has become a focal point for Muslims during the Holy Month of Ramadan.

Since the opening of one of the world’s largest mosques in the world, the responsibility of preparing the Iftar meals and serving the same among the faithful has been with the Abu Dhabi Armed Forces Club and Hotel.

Hundreds of chefs and cooking assistants work tirelessly to deliver thousands of Iftar meals to fasting Muslims from the beginning of Ramadan till the end. The team consists of 400 cooks, 160 stewards and 450 service staff — including purchasing, store, hygiene and safety — all work hand-in-hand to prepare and put together the Iftar meals.

Besides, 180 cleaners are also the part of the team to ensure hygiene and a clean place throughout the day.

Ingredients used at the Abu Dhabi Armed Forces Club and Hotel kitchen include seven tonnes of rice, an equal quantity of meat, 12 tonnnes of chicken and 10 tonnes of fresh vegetables of the best quality on a daily basis.

Staff assigned to prepare the Iftar meal work round the clock, and are divided in three shifts to ensure smooth supply of meals.

The food is packed hot just after cooking and kept above 63 degrees in mobile hot cabinets until serving. While transferring the meals to the Sheikh Zayed Grand Mosque, the staff ensures that all hot and cold meals are kept in hot and cold mobile cabinets and transported by trucks equipped and approved by the Abu Dhabi Food Control Authority.

In its more than decade-long existence, the Sheikh Zayed Grand Mosque has carved a niche for itself as a cultural space of its own where residents and visitors of all nationalities and religious and cultural backgrounds visit to experience the Islamic values of sharing and compassion.