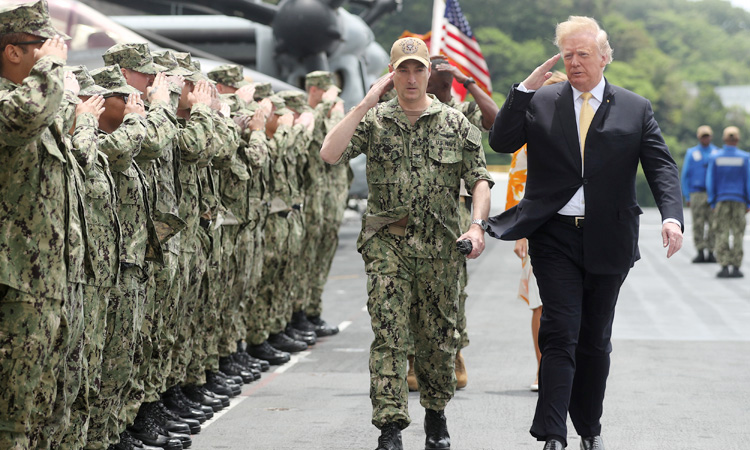 Addressing more than 800 uniformed service members in the belly of the USS Wasp, an amphibious assault ship at the Yokosuka US naval base, Trump said they were part of “the most fearsome group of American warriors this side of the Pacific.”

The US military has no intention of losing its paramount status in the world, Trump said, insisting it will “forever remain second to none.”

“We have equipment, missiles, rockets, tanks, planes, ships — no one in the entire world can build them like we do. It’s not even close,” he said. 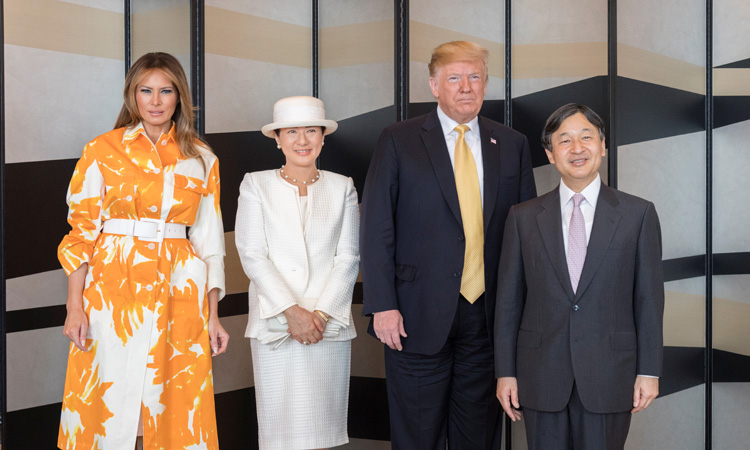 US President Donald Trump and first lady Melania Trump are bid farewell by Japan's Emperor Naruhito and Empress Masako before their leaving from Japan, at a hotel in Tokyo on Tuesday. Reuters

The address to the cheering military marked Memorial Day, the US holiday honouring the war dead, but it was also clearly aimed at growing rival China and North Korea, where Trump has invested heavy diplomatic efforts to try and get the regime to give up nuclear weapons — so far with only modest results.

Trump told the sailors, marines and other personnel that they were “confronting this region’s pressing security challenges with unmatched courage.”

“You know what we’re talking about,” he said.

Abe talked about the “increasingly severe security environment” in the region and confirmed that the Kaga was being converted to take not only helicopters but also fighter planes.

Trump said the Kaga will carry a version of the advanced F-35 stealth fighter, which Japan is buying in larger numbers than any other US ally.

“With this extraordinary new equipment, the JS Kaga will help our nations defend against a range of complex threats in the region and far beyond,” Trump added.

There was little real substance in Trump’s visit to Japan, which started Saturday and included a golf game with Abe and presentation by the American president of a huge trophy at a Tokyo sumo tournament.

But the main goal was to celebrate the countries’ alliance and, from Japan’s point of view, to charm Trump ahead of tricky negotiations on the muscular US demand for more market access.

That seemed to work, with Trump signalling there will be no move on trade until after an upper house election here in July.

The highlight was the meeting with Naruhito, who took over the Chrysanthemum Throne only three weeks ago, after his father stepped down in the first abdication for two centuries.

Other world leaders will have to wait until larger-scale celebrations in October. The Trumps went to see Naruhito at his palace Monday morning and then again in the evening for a banquet featuring six courses, including Trump’s favourite — beef — and a dessert described as Glace Mont Fuji.

The emperor and Trump both made toasts praising their countries’ friendship. The US president even sprinkled a few Japanese words into his address, referencing ancient Japanese poetry.

Trump and the first lady said goodbye to the Japanese royal couple on Tuesday before leaving Tokyo. The White House only described this as a “farewell call”, and there were no immediate details on how it went.

Although the whole Japan trip was designed to be a feelgood display, there was an awkward moment Monday when Trump flatly contradicted Abe and some of his own advisors on North Korea.

Trump insisted that he does not consider recent North Korean short-range missile tests to have violated UN resolutions, or even to pose a particular threat.

“My people think it could have been a violation... I view it as a man who perhaps wants to get attention,” Trump said of North Korean leader Kim Jong Un, whom he once more praised, calling him “very smart.” 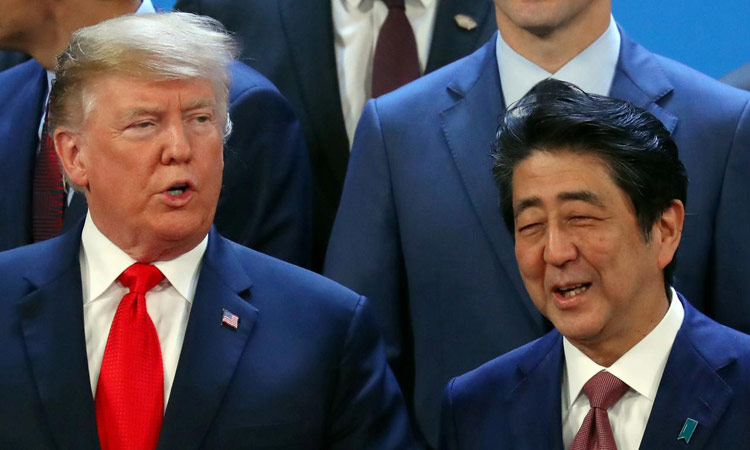