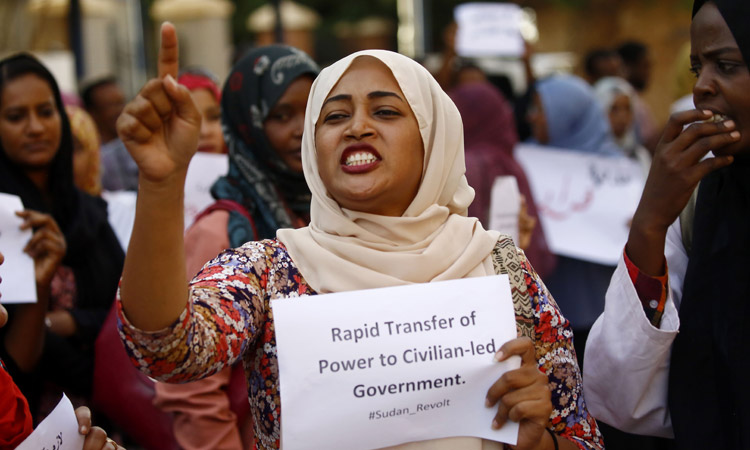 A health worker carries a placard as scores of medics hold a rally in front of a hospital in Khartoum. Ashraf Shazly/AFP

Hundreds of passengers at Khartoum airport and the Sudanese capital's main bus terminal were stranded on Tuesday as protesters began a two-day national strike to pile pressure on the military to hand power to a civilian administration.

Leaders of an umbrella protest movement remain at loggerheads with army generals, who seized power after ousting president Omar al-Bashir last month, over who should lead a new governing body -- a civilian or a soldier.

The new governing body is expected to install a transitional civilian government, which in turn would prepare for the first post-Bashir elections after a three-year interim period.

In a bid to step up pressure on the ruling military council, the Alliance for Freedom and Change protest movement has called for a two-day general strike starting on Tuesday. 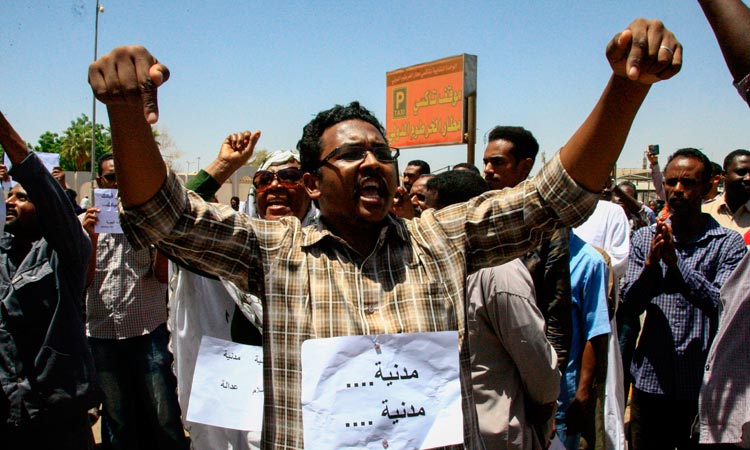 Hundreds of passengers were stranded at Khartoum airport as scores of employees at the facility went on strike, chanting "civilian rule, civilian rule," an AFP correspondent there said.

Many employees carried banners or wore badges that read "We are on strike".

Passengers were also stranded at Khartoum's main bus terminal as hundreds of employees observed the strike.

"We see the military council as part of the former regime. We don't see it upholding any rights and building a just state.

Many carried banners reading: "Today, tomorrow no buses as we are on strike".

"I have to travel to Gadaref to be with my family for Eid, but I'm not angry as I understand the reason for the strike," traveller Fatima Omar said as she waited with her children at the bus terminal.

Protest leader Siddiq Farukh told AFP that the strike was a message to the world that Sudanese people "don't want the power to be with the military".

Another prominent protester, Wajdi Saleh, told reporters late Monday that there was "still no breakthrough" in negotiations but the protest movement was ready to negotiate if the generals offered fresh talks.

"We hope that we reach an agreement with the military council and won't have to go on an indefinite strike," he said.

Protest leaders had said medics, lawyers, prosecutors, employees in the electricity and water sectors, public transport, railways, telecommunication and civil aviation were set to take part in the strike.

A Sudanese woman flashes the ‘V’ for victory sign as protesters gather in Khartoum. Ashraf Shazly/AFP

Sudanese protesters gather outside the military headquarters in Khartoum. AFP

They said actions in the telecoms and aviation sectors would not affect operations.

But the protest movement's plan has been dealt a blow after a key member, the National Umma Party, said it opposed the plan as there had been no unanimous decision for a strike.

Umma and its chief Sadiq al-Mahdi have for decades been the main opponents of Bashir's iron-fisted rule, and threw their weight behind the protest movement after nationwide demonstrations erupted in December.

Mahdi's elected government was toppled by Bashir in an Islamist-backed coup in 1989.

Protester Hazar Mustafa said a civilian government was the only solution to Sudan's problems.

"We see the military council as part of the former regime. We don't see it upholding any rights and building a just state," she said.

The army ousted Bashir in April after months of protests against his autocratic rule, including a sit-in by tens of thousands of protesters outside Khartoum's military headquarters.

"I have to travel to Gadaref to be with my family for Eid, but I'm not angry as I understand the reason for the strike.

But the generals, backed by key regional powers, have resisted calls from protesters and Western governments to hand over power to civilians.

Thousands of protesters remain camped outside army headquarters, demanding the generals step down.

Before suspending talks last week, protesters and the generals had agreed on several key issues, including the three-year transition and the creation of a 300-member parliament, with two thirds of lawmakers coming from the protesters' umbrella group.

But negotiations stalled as protest leaders insisted a civilian must head the new sovereign council, with civilians making up the majority of its members -- proposals rejected by the military. 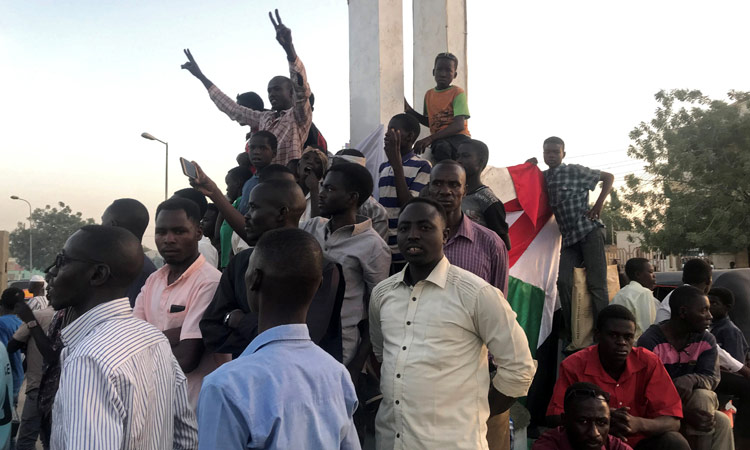 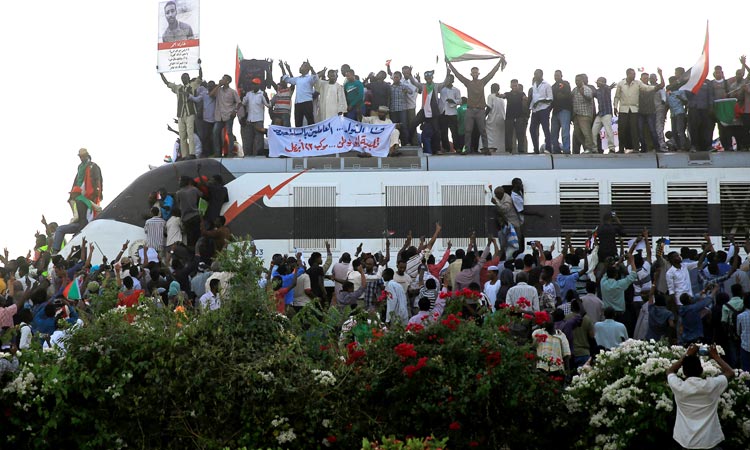