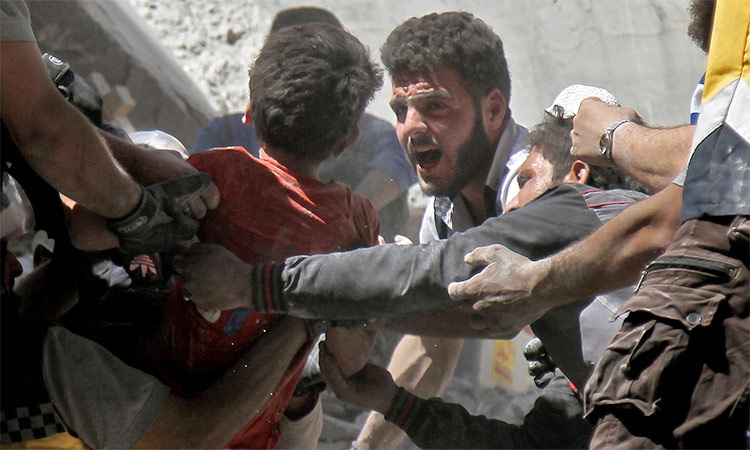 White Helmet volunteers and civilians rescue a child from the rubble of a building in Ariha, Idlib province. Agence France-Presse

At least 21 civilians were killed on Tuesday as Syria’s regime intensified its bombardment of the last extremist stronghold in the country’s northwest, a monitor said.

Nine children were among the 21 killed in government fire on several towns in Idlib province and the countryside of neighbouring Aleppo, said the Syrian Observatory for Human Rights.

Strikes on a busy street in the village of Kafr Halab, on the western edge of Aleppo province, killed at least nine civilians.

“The facility is reportedly out of service due to severe structural damage,” he told AFP.

“The hospital is completely out of service,” he said. “It was a strong attack. The generators and even my car caught fire,” he told AFP.

It follows two days of intensified regime bombardment on the region that killed a total of 31 civilians on Sunday and Monday, according to the Britain-based Observatory.

Rescue volunteers and civilians were seen pulling dust-covered victims from the rubble of destroyed buildings in the wake of those strikes.

Idlib and parts of the neighbouring provinces of Aleppo, Hama and Latakia are under the control of Hayat Tahrir al-Sham, a extremist group led by Syria’s former Al-Qaeda affiliate.

The region is supposed to be protected from a massive government offensive by a September buffer zone deal, but the jihadist bastion has come under increasing bombardment by the regime and its ally Russia since late April.

The Observatory says nearly 280 civilians have been killed in the spike in violence since then.

More than 200,000 civilians have already been displaced by the upsurge of violence, according to the United Nations.

The UN has warned an all-out offensive on the region would lead to a humanitarian catastrophe for its nearly three million residents.  At least 20 health facilities have been hit by the escalation — 19 of which remain out of service, the UN has said.

New satellite images show fields, orchards and olive groves burning in northwest Syria, where the army has waged an assault against rebels in their last major stronghold.

Government air strikes, backed by Russia, have focused on the south of Idlib province and nearby parts of Hama, uprooting nearly 250,000 people.

In the photos by satellite imagery provider DigitalGlobe Inc, plumes of dark smoke rise from the countryside around al-Habeet village in Idlib and the small town of Kafr Nabouda in Hama.

The before and after images, collected at the start and end of last week, show patches of scorched earth, fields blackened by fire, and clusters of destroyed buildings. Some of the fires appear to be still burning.

The civil defence in the northwest, a rescue service in opposition territory, said on Monday that government warplanes had been pounding crop fields in Idlib, setting them on fire.

While al-Habeet is in the hands of insurgents, government forces recaptured Kafr Nabouda on Sunday, the third time it changed hands in the latest fighting. State media said the army seized it from Tahrir al-Sham, formerly the Nusra Front until it broke away from al Qaeda.

The army onslaught in the northwest over the past month marks the most intense escalation between President Bashar al-Assad and his insurgent enemies since last summer.

Outside her makeshift tent, Syrian mother Mona Mutayr lays out a frugal meal of potatoes and cucumber as her family marks their first Ramadan since being displaced by war.

The holy Islamic month is usually one of celebration, with Muslims fasting from dawn to dusk and gathering around a family meal after sunset.

But regime bombardment forced Mutayr and her family to flee their home earlier this month and set up camp in an olive grove near the Turkish border.