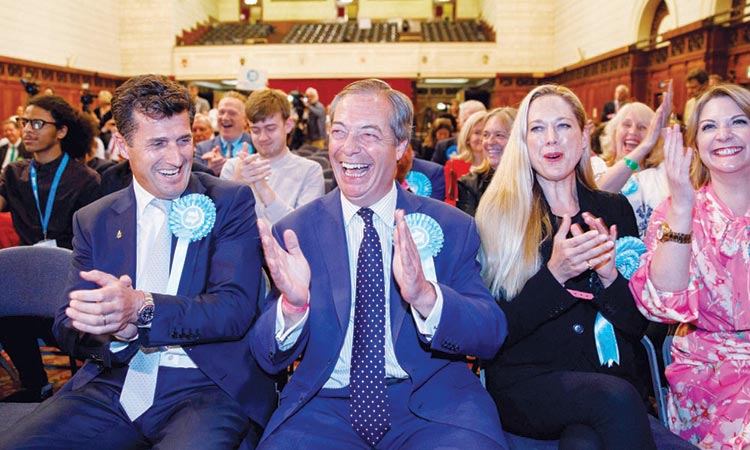 Nigel Farage reacts after the election results at the Civic Centre Southampton on Monday. Agence France-Presse

After a punishing night when Britain’s deepening Brexit divisions were on show, the governing Conservatives said the results were a demand for the country to follow through on plans to exit the European Union no matter what.

Taking a different tack, the opposition Labour Party described a public vote - a new national election or second referendum - as a way to reunite the country. With Farage’s Brexit Party capturing the greatest number of votes for seats in the European Parliament, followed by a group of fervently pro-EU parties, Conservatives and Labour were under pressure to commit clearly to either side of the debate.

Almost three years since Britain voted narrowly to leave the EU and just under two months after the originally planned departure date, lawmakers are still arguing over how, when or even whether the country will leave the club it joined in 1973.

For the Conservatives, who will appoint a new leader by the end of July, many of the contenders will see the European vote outcome as proof that they must seek a cleaner break with the EU. For Labour leader Jeremy Corbyn, pressure will mount to embrace a second referendum without qualification.

But what is clear for both from a vote which many used as a protest, Brexit, which has already forced Prime Minister Theresa May to say she will resign on June 7 over her failure to deliver Brexit, risks shattering their election prospects.

Britain’s interior minister Sajid Javid, one of several Conservatives who hope to replace May, described his party’s performance in the election as “hugely disappointing”.

“This is a verdict on our delivery of Brexit,” Javid said on Twitter. “There’s a clear lesson: people want us to get on with it.”

Labour’s finance chief, John McDonnell, also said it was time to unite but offered a different solution - a “public vote” to help pin down where most Britons stood on the way forward.

He caused a short-lived sensation in seeming to signal a shift in Labour policy to unequivocally back a second referendum on Britain’s membership of the EU.