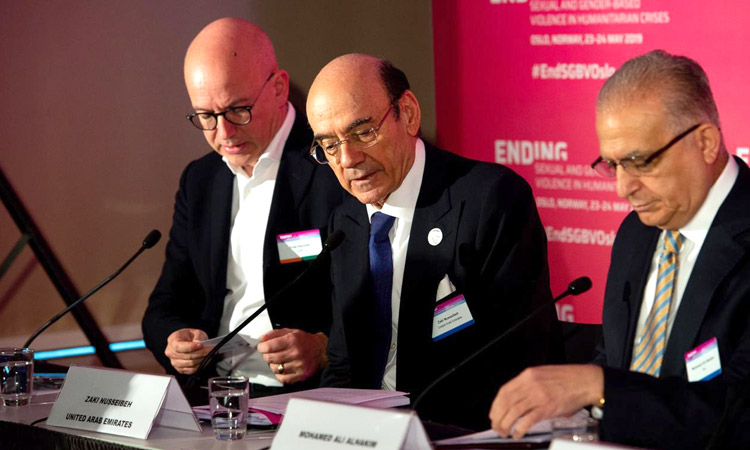 A delegation from the United Arab Emirates led by Zaki Nusseibeh. WAM

The UAE has pledged $10 million to support ending of sexual and gender-based violence. This came when a UAE delegation led by Zaki Nusseibeh, Minister of State, co-hosted the "International Conference on Ending Sexual and Gender-based Violence in Humanitarian Crises" which was held in Oslo, Norway on May 23-24, 2019.

In his opening address, Zaki Nusseibeh emphasised "that the empowerment and protection of women is a key pillar of the UAE’s strategy, women’s empowerment has always played an important role in the journey of the UAE’s development and has acted as a main driver of the country’s ascent to the global arena."

"The UAE’s commitment to the empowerment and protection of women spurs from the legacy of late Sheikh Zayed Bin Sultan Al Nahyan, and is upheld by the wise leadership of President His Highness Sheikh Khalifa Bin Zayed Al Nahyan, His Highness Sheikh Mohammed Bin Rashid Al Maktoum, Vice President, Prime Minister and Ruler of Dubai and His Highness Sheikh Mohamed Bin Zayed Al Nahyan, Crown Prince of Abu Dhabi and Deputy Supreme Commander of the UAE Armed Forces, and the endeavours of H.H. Sheikha Fatima Bint Mubarak, Chairwoman of the General Women's Union, Supreme Chairwoman of the Family Development Foundation and President of the Supreme Council for Motherhood and Childhood", he added.

Zaki Nusseibeh remarked that the empowerment and protection of women is one of the key pillars of the UAE’s foreign aid strategy, backed up by the country’s pledges to continue support for the countering of gender-based violence in armed conflict, and enhancing gender equality and women’s empowerment. 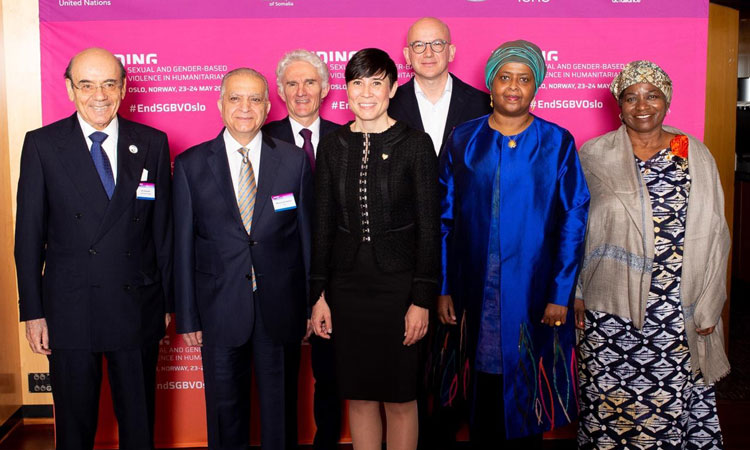 A delegation from the UAE led by Zaki Nusseibeh, Minister of State in Oslo, Norway.

Zaki Nusseibeh added that: "The United Arab Emirates is committed to the Conference’s objective to end gender-based violence in humanitarian emergencies and crises, by providing the required financial resources needed to implement various women’s protection programmes, and by providing support to NGOs and women-focused organizations active in vulnerable and conflict afflicted areas."

Zaki Nusseibeh mentioned that the UAE hosted technical meetings to develop Abu Dhabi’s "Every Woman, Every Child, Everywhere" initiative, which aims to determine which sectors should be prioritised during humanitarian response in order to protect women and children. The UAE, through its Ministry of Defence, signed a memorandum of understanding with "UN Women" pledging to increase the amount of women that participate in peacekeeping operations, pursuant to Security Council resolution #1325. Accordingly, 134 women from seven Arab countries were trained over two months and the geographical scope of the programme was expanded to include women from African and Asian countries.

The UAE also signed a MoU with the International Committee of the Red Cross, ICRC, to implement humanitarian projects in Myanmar in support of the Rohingya community and in the Democratic Republic of the Congo. These programs focus primarily on issues concerning women and children.

In conclusion, Zaki Nusseibeh emphasized that ending all forms of gender-based violence requires supporting all international efforts exerted towards this goal.

On the sidelines of the conference, Zaki Nusseibeh met with UNICEF Executive Director Henrietta Fore. The two sides explored means and ways to protect women and girls during international crises and armed conflicts. He also held a bilateral meeting with Norwegian Minister of Foreign Affairs, Ine Marie Eriksen, during which he presented her with a "Peace Carpet".

In 2014 the Peace Carpet Project was established by H. H. Sheikha Fatima Bint Mohammed Bin Zayed Al Nahyan's Initiative, FBMI, to replace the infamous Afghan war rugs. The "war rug" tradition of Afghanistan arose as a result of decades of military conflict in the country. Carpet weavers began to incorporate images of war into their designs, including images of weapons, tanks and soldiers. The Peace Carpet Project seeks to take the traditional skills to carpet weavers and counter the infiltration of war in this art. FBMI’s Peace Carpet Project invites carpet weavers to create carpets without a predetermined design, encouraging the maker to weave her vision of peace. The peace carpets commonly contain designs incorporating the scales of justice, herds of livestock signifying working freely on lands, and buildings that represent schools. Unlike war rugs, the peace carpet is free of chemical dyes and made using 100% ethically sourced Afghan wool.

The Sheikha Fatima Bint Mohammed Initiative, FBMI, is an Emirati initiative that aims to empower women and raise living standards of the people in Afghanistan.

The initiative has resulted in over 4,000 jobs for Afghan artisans, 70 per cent of which are women, 35 percent widows. FBMI’s impact has had a true ripple effect on Afghanistan’s economy, benefiting not only FBMI employees, but also the children and relatives of FBMI artisans, as well as their communities. The success and exciting future of FBMI is a testament to the vision and commitment of H.H. Sheikha Fatima Bint Mohamed Bin Zayed and the government of the UAE to the empowerment of women, a vital element in achieving international peace and security.