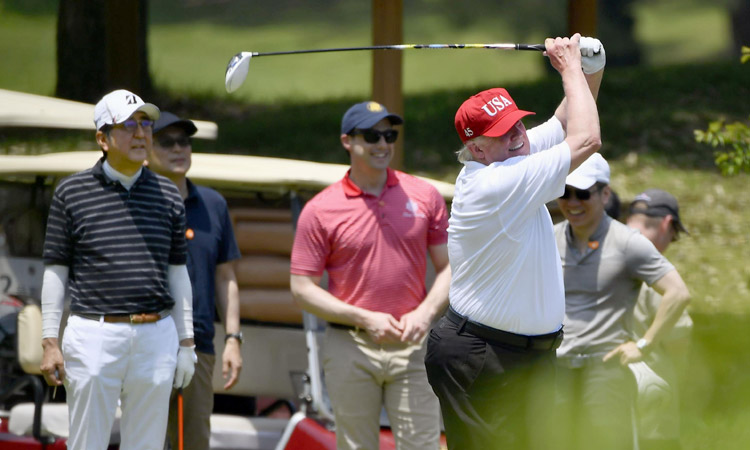 US President Donald Trump and "golf buddy" Japanese Prime Minister Shinzo Abe teed off for a round of their favourite sport on Sunday before heading to the sumo, as the two leaders cement a close diplomatic friendship.

Aerial footage on Japanese television showed the pair practising their swings and driving off the tee, as well as putting on the manicured greens, accompanied by former professional golfer Isao Aoki.

As Trump's Marine One helicopter thundered in, shattering the serenity of the course, a casual-looking Abe was there to greet him, sporting white trousers and a blue top. Trump was dressed in a red sweater and black trousers with a red USA cap. 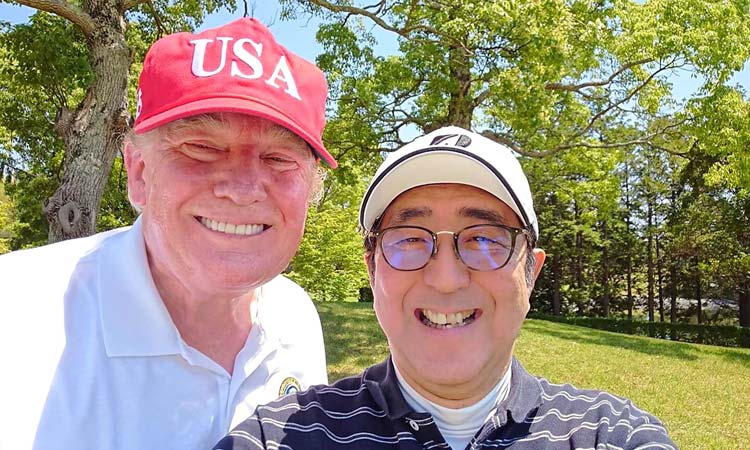 This handout shows Donald Trump (left) and Shinzo Abe posing for a photograph at Mobara Country Club in Chiba. AFP

Abe later tweeted a selfie of the two grinning into the camera, as the pair relaxed before the formal element of Trump's four-day trip begins on Monday with a visit to the new emperor and talks likely to touch on trade and North Korea.

And Pyongyang was clearly on Trump's mind before he hit the green, as he took to Twitter in an apparent bid to ease mounting tensions with North Korea, which has conducted two missile tests after a February summit in Hanoi collapsed without agreement.

Dismissing the missiles as "some small weapons", he said the tests had "disturbed some of my people, and others, but not me".

This appeared to be a reference to one of his "people", National Security Advisor John Bolton, who had said the previous day that there was "no doubt" the launches had contravened UN Security Council resolutions.

But Trump said: "I have confidence that Chairman Kim will keep his promise to me."

"I have confidence that Chairman Kim will keep his promise to me.

The American president maintains that North Korea's leader Kim Jong Un had pledged he was serious about denuclearisation although experts say there is still a wide gulf between the two sides over what that means exactly.

After the golf, the two leaders were set to take in the final day of the sumo "basho" or tournament in Tokyo. Trump will present Japanese grappler Asanoyama with the "President's Cup" -- weighing 60-70 pounds (27-32 kilograms) and measuring 54 inches (1.4 metres).

Security around the hallowed Ryogoku Kokugikan sumo stadium was ultra-tight, with fans screened with metal detectors and asked to sip from any bottle they planned to take in to prove the liquid was not dangerous.

Excitable fans were also warned against throwing their seat cushions — as tradition dictates whenever a yokozuna or grand champion is felled — lest the president be hit.

"Acts such as throwing of cushions inside the arena may result in ejections and punishments. Please absolutely refrain from doing so," a flyer said, according to footage from national broadcaster NHK.

The President's Cup is kept on a display at Palace Hotel in Tokyo on Sunday. Brendan Smialowski/AFP

Supporters of US President Donald Trump gather near the Palace Hotel Tokyo on Sunday.

A police officer stands guard on a street near a hotel where Donald Trump is staying in Tokyo. Reuters

"We shall not sell tickets in the future to those who carry out these acts."

On Monday, the serious diplomacy begins, with Trump set to be the first foreign leader to meet Japan's new emperor, Naruhito, who ascended the Chrysanthemum Throne at the beginning of the month after his father's abdication, the first in more than 200 years.

The United States and Japan, respectively the world's top and third-biggest economies, are also in the process of negotiating a delicate trade deal.

Trump wasted little time upon arrival in attacking what he sees as an imbalanced trade relationship, vowing it would become "a little bit more fair" after a deal was inked.

After golf on Sunday, he tweeted that "great progress" was being made in the negotiations but "much will wait" until after Japanese upper house elections expected in July.

"Our understanding on our positions and the way we think further deepened" after the meeting.

Trump's top trade representative Robert Lighthizer spent more than two hours locked in talks with his Japanese counterpart, Economy Minister Toshimitsu Motegi, Saturday night but there was no sign of a breakthrough.

"Our understanding on our positions and the way we think further deepened" after the meeting, Motegi told reporters. 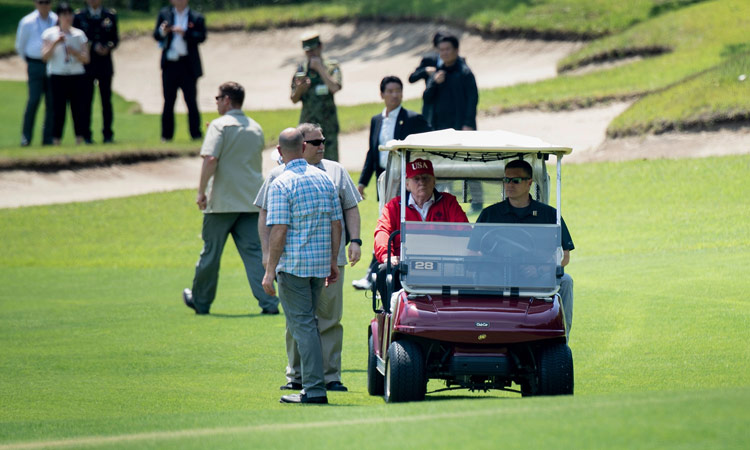 Donald Trump (centre) waits in a golf cart to board Marine One at Mobara Country Club in Chiba. Brendan Smialowski/AFP


"But it doesn't mean our positions are in perfect harmony. We agreed to make efforts to fill in the gap," he said, without giving more precise details.

While Abe and Trump were at the golf course, their wives Melania and Akie enjoyed a display of "digital art" at an exhibition that has been a smash hit in Tokyo.